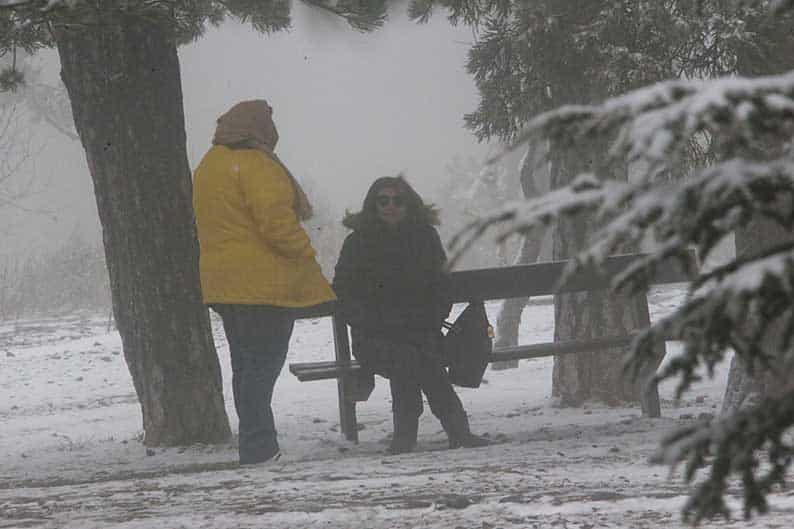 Women braving the snow in Troodos

Thursday night was the coldest of this winter and this has been the fourth rainiest December in 15 years, the head of the meteorological office said on Friday.

Friday night is also expected to be cold but a tad warmer than Thursday when temperatures dropped to -5 degrees Celsius on Troodos’ Olympus peak and around 3C at Troodos square.

Although Friday will be warmer than Thursday, Nicolaides told the Cyprus News Agency temperatures will be lower than the seasonal average. Temperatures are expected to be around 13C inland, 17C in the coastal areas. In the highest mountainous areas, the maximum temperature will not exceed 2C, he said.

In the evening, temperatures are expected to drop to 3C inland, around 7C in the coastal areas and -3C in the mountains.

“With these temperatures it is very likely that frost will be formed on roads that are wet, so caution is necessary,” he said.

The same weather pattern is expected between Sunday and Tuesday. The temperatures are expected to remain on the same levels as Saturday’s.

Nicolaides said that the wave of bad weather that has affected Cyprus over the past couple of days came from the northern sea, and has influenced the Balkan peninsula and Greece and moved east.

In terms of rainfall, Nicolaides admitted that the met office had been off in its predictions as they expected a dry December.

This year’s December, he said, was “excellent” as regards rainfall and is the fourth rainiest December of the last 15 years with more than 140 millimetres of rain.

Average rainfall during the month reached 147 per cent of normal, according to the preliminary data.

The heaviest rainfall was recorded at Paphos airport, 294 per cent, and Polis, 171 per cent.

Average rainfall between December 1 and 28 was 155.2mm compared with 105.6mm, which is normal for the month. Average rainfall in the past 24 hours was 5.2mm, the Met said.

The rainiest December was 2012 with 209 millimetres of rain, Nicolaides said.

On whether January will be as rainy, Nicolaides said that no one can say with certainty as climate prediction depends on a number of factors.

“There are some predictions that January will be rainy, but there are some renewed forecasts for a dry month. It remains to be seen,” he said.

The frost and snow in the mountainous areas caused some problems to motorists who tried to reach the Troodos square on Thursday, police said, as two to three cars that had no snow chains fitted on their tyres got stuck in the snow.

A jeep overturned in a ditch. No injuries were reported.

Police warned motorists that roads, especially in mountainous areas will be very slippery due to frost, and that those wishing to visit Troodos must fit snow chains or use four-wheel drive vehicles.

On Friday, police have announced that all roads leading to Troodos, both from Limassol and Nicosia, are closed due to heavy snowfall.

The following roads are open only to vehicles with four-wheel drive or those equipped with chains:

Due to frost, the roads Kakopetria-Prodromos and Platania-Karvounas have become extremely slippery and dangerous and drivers are urged to be very careful, to drive at low speed, to keep their lights on and drive at a safe distance from vehicles in front.

On Friday, police announced that the Prodromos-Troodos road was open only to vehicles with snow chains or on four-wheel drive.

The following roads remain slippery due to frost, police said:

Drivers were urged to be very careful, to drive at low speed, to keep their lights on and drive at a safe distance from vehicles ahead of them.