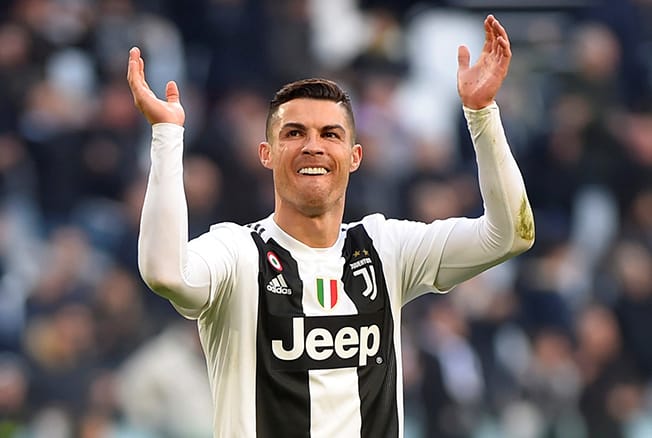 Cristiano Ronaldo scored a brace, the second goal a contentious penalty, to give Juventus a dramatic 2-1 win over Sampdoria who had a stoppage-time equaliser chalked off following a long VAR review in Serie A on Saturday.

Riccardo Saponara thought he had given Sampdoria a point when he curled a delightful shot past Mattia Perin and was booked for throwing off his shirt as he celebrated.

But, after a delay of nearly three minutes, referee Paolo Valeri ruled that there had been an offside in the buildup.

It was one of three VAR decisions in a game which also saw Sampdoria’s 35-year-old forward Fabio Quagliarella score for the ninth Serie A game in a row, making him the first player to do so since David Trezeguet in 2005.

Leaders Juve reached the season’s halfway mark with 53 points out of a possible 57, a Serie A record for a 20-team championship.

“The penalty given to Juventus was a present,” he said. “We can talk about this until the day after tomorrow but you can’t give a penalty like that, otherwise every Sunday will turn into a mess; that handball decision was absurd.”

Ronaldo gave Juventus the lead after two minutes, collecting Paulo Dybala’s pass and cutting inside to score with a low shot.

Former Juventus forward Quagliarella levelled in the 33rd minute from a penalty awarded after the ball hit the back of Emre Can’s outstretched arm as he jumped for it.

The referee gave the penalty after looking at the incident on the pitchside monitor.

Juve’s winner also came for a handball although the ball only brushed Ferrari’s arm which did not appear to be outstretched.

The referee immediately pointed to the spot but Ronaldo had to wait more than two minutes to take his kick while the incident was reviewed on the pitchside monitor.

Juventus coach Massimiliano Allegri said he believed his side needed 37 more points from their remaining 19 games to make sure of an eighth successive title.

“VAR is an important instrument,” he said. “There were two penalties, both awarded with the use of VAR; one confirmed and one under a review. Looking at it that way, it was either both or neither. In Italy, we create too many controversies.”

Some Gatwick drone sightings may have been police device

Passenger dies and 23 in hospital after minibus overturns