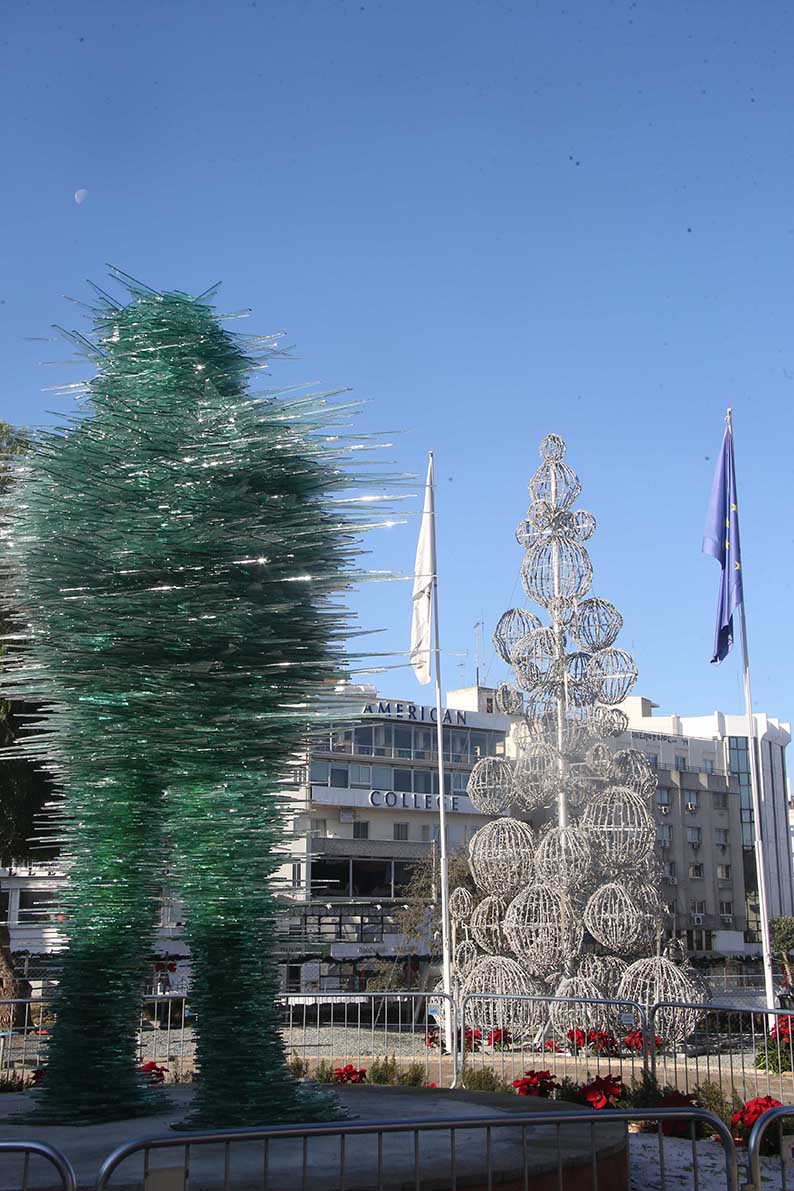 The Glass Poet now looks out over Eleftheria square

Journalists too often have to deal with the negatives, so seeing something positive going on right in the heart of our capital came as a surprise. And it is also always a pleasure to learn more about a city feature that has been around for years but most people can offer little explanation for its existence.

Which is why the ‘Glass poet’ is my pick of the year.

I was intrigued to hear in November that the jagged glass sculpture, which had been tucked away behind Famagusta gate since 1983, was going to be moved to a prominent place right in front of the municipality.

When the glass sculpture, named ‘The Poet’ was first displayed back in 80s the greenish glass was sparkling, but slowly it became increasingly dirty and dull, and nobody seemed to have the expertise, money or interest in cleaning the layers of glass.

Not knowing the man made of glass was supposed to be a poet, I had wondered for years what was behind the sculpture, and why it was there.

Last month I heard that the sculpture was being re-erected next to the municipality and the revamped Eleftheria square. I tried researching the statue on the internet but didn’t have much to go on. I had no idea that the sculpture was meant to be a poet, and had no inkling that the artist was renowned Greek sculptor Costas Varotsos who has since been instrumental in erecting glass structures in many countries.

I went for a walk to the municipality to find out what was happening. First, I saw the sculpture, or at least its legs, since people were working on building it. And, then, there was the artist himself – Costas Varotsos – overseeing the reconstruction.

Varotsos told me that the late Iraqi architect Zaha Hadid, who designed the controversial new-look Eleftheria square, and mayor Constantinos Yiorkadjis had both requested that the statue should be moved out of its Famagusta gate hiding place and into the city centre. This has now happened, though not quite as they requested, as the artist had his own idea for where it should be placed, and it was not going to be in the middle of the square which is largely made of concrete.

He wanted it to be connected to a historic building, the municipality, as well as to other surrounding modern structures.

He described the process behind its rebuilding.

“The skeleton has remained the same, the old and dirty glass was replaced by new glass layers. It is also going to be cleaned once a year, with special chemicals.”

He went on to explain why the sculpture was made out of glass.

“How is the poet? The poet is fragile, sharp, aggressive, suicidal. And when I thought of a material that could concentrate all those traits, I came up with glass.”

The concept behind the sculpture is persuasive. Varotsos was interested in the balance of space and time.

“I wanted to find a way to overcome the space and time imbalance due to the exaggeration of the concept of speed in our modern time, creating a space-time gap,” he said.

“The Poet is an example of this balance. Glass is like a piece of space through which light shines. But if you put one piece of glass on top of another, it is like counting: one, two, three, four. That is time. So, it doesn’t only represent the concept of the poet, it also represents a space-time balance.”

So, a short walk, a short talk and a mystery solved. An excellent way for a journalist to let the public know about what is now a showpiece for locals and visitors in the centre of our capital, plus a rare opportunity to report on a project that is not delayed or running into financial trouble and/or made of concrete, and which is the best form of art – pleasing to look at and providing food for thought.

Anastasiades ready to speak with Turkey, not ‘sidelining’ Akinci