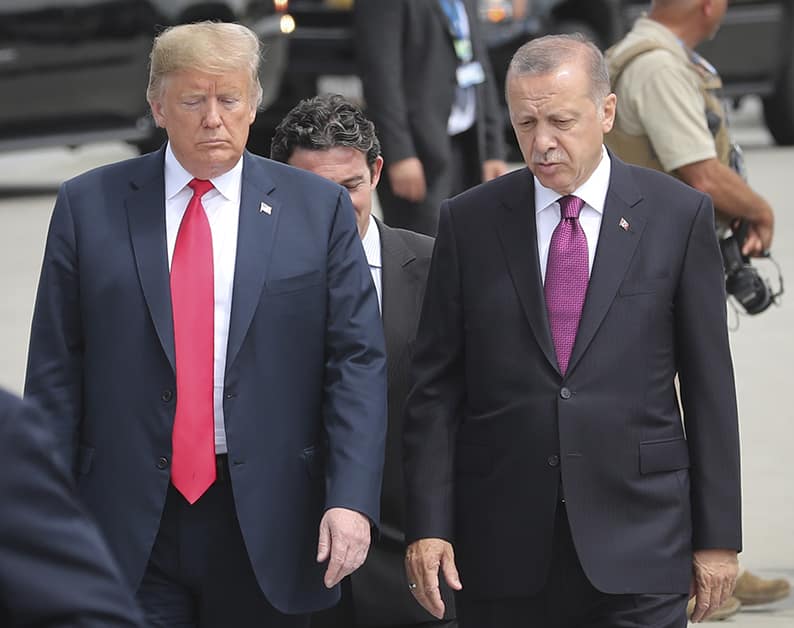 As the year draws to a close and the usual reviews and predictions for 2019 are in full swing, it is easiest to single out a few pivotal events in late 2018 as the most useful pointers to the shape of things to come next year.

As it happens the region around Cyprus is one where civilisations clash and political problems abound and hover and where prophesies come to pass; though mercifully Armageddon across the sea on the road to Damascus and the place of final reckoning has yet to happen.

In Cyprus itself 2018 was uneventful. This is unsurprising since no one is getting killed here – and long may this state of affairs continue. Life is too short for anyone to waste their life for the mistakes of politicians. God forbid, but hand on heart, can anyone imagine laying down his life for a decision made by a political leader in Cyprus today?

Of the events that shocked and shaped world politics in 2018, the grotesque murder of Jamal Khashoggi at the Saudi consulate in Istanbul was pivotal in changing the world’s perception of the kingdom. The butchery was so brutal that Donald Trump was not prepared to listen to what happened to the hapless journalist.

As a result the regime in Saudi Arabia has been put on probation, and heads will literally roll in the kingdom in 2019. Given its oil wealth and its role as the centre of Wahhabism the ripple effects of the murder will be far reaching in the region and beyond. There is such a principle as an ethical foreign policy, and after the Trump hiatus goes and America returns to a rules-based system and jettisons the transactional variety, the hope is that Saudi Arabia and her allies will be contained and their foreign adventures curtailed.

But for the next year or so we have to proceed as if there is no ethical dimension to the conduct of foreign policy. East of Cyprus on Christmas Eve the Israelis bombed an area around Damascus with the same insouciance the Egyptians showed in their attack on Israel in 1973 during Yom Kippur. This is par for the course and no one in the West cares – there is it seems standing approval for such attacks on poor Syria, tolerated even by the Russians. So long as their assets are not hit, Syria is fair game to all and sundry.

Earlier in December presidents Donald Trump and Recep Tayyip Erdogan struck a deal for American troops to withdraw from north east Syria. Trump declared Isis defeated and agreed to leave it to the Turks to mop up, in line with his election promise to disengage from expensive wars in faraway places and handover to regional powers.

Considering Trump knows little about the area this was an astute decision, even if was a betrayal of the Kurdish armed groups fighting Isis and condemned by Britain and France as premature. It is true that Kurdish fighters have been fighting Isis for the West, but the Turks are Nato allies and felt betrayed too as they have border security issues with Kurdish terrorist groups in the area.

These betrayals are not new. The Arabs were promised nationhood by Britain if they fought the Ottomans in Arab lands in World War I and got the Balfour Declaration and the state of Israel instead. It looks as though the Syrian Kurds were also promised nationhood only to find that their alliance with America was a misalliance and that the territory to build their nation will sooner or later be returned to Syria.

But what of the Kurdish population in Turkey? That they have rights that need to be accommodated was accepted even by Erdogan, albeit in his milder formative phase as prime minister in 2009. Ordinary Kurds in Turkey are to Turks what the Scots are to the English. They have undoubtedly been oppressed by the Turkish state, but the two peoples have a lot in common and there is no racism between them as there is for example between Greeks and Turks.

Kurds and Turks intermarry freely and their offspring are as much part of Turkish society as the rest of the population; and they managed to live cheek by jowl in all parts of Turkey despite violence on both sides.

Again like the Scots, Kurds were happy to do their empire’s bidding. For the most part they were loyal to the Sultan and the Caliphate and were the only people to rebel when the Caliphate was abolished by Kemal Ataturk whose new secular Turkish identity was imposed on them.

The Ottomans ruled an empire of many creeds and when it collapsed after World War I there was an urgent need to create a new national identity among the Turkish-speaking peoples who sought refuge in Asia Minor, and imbue in them a new sense of identity based on the Turkish language. But the Kurds clung to their ancient identity and language that was more deeply rooted in the land than most of the other ethnic groups.

Kemal Ataturk considered granting the Kurds some degree of autonomy but it was not to be. According to his biographer Andrew Mango, his failure to do so was one of three failures in an otherwise dazzling career as a soldier-statesman – the other two were that he was far too secular for Turkish society and that he failed to leave behind a sufficiently democratic legacy.

Recep Tayyip Erdogan also tried to grapple with the Kurdish question when he was prime minister through contacts between Hakan Fidan, his intelligence chief, and Abdullah Ocalan the imprisoned leader of PKK, but it came unstuck – apparently owing to malign influences inside the Turkish state.

The Kurdish people are as much part of the fabric of Turkish society as everyone else. It is therefore in everyone’s interest to put into effect Ataturk’s original idea of granting the Kurds regional autonomy and be done with the Kurdish problem once and for all – always provided of course that the PKK and its offshoots abandon separatist terrorism.

Like America, Britain, France and most other states the Turkish state has the same obligation to combat terrorism and the Obama administration’s decision to side with a group with known links to the PKK that the US accepts is a terrorist organisation was contemptuous of an important Nato ally.

Selective terrorist tolerance is nothing new. It is of a piece with support for the Irish Republican Army (IRA) by pro-Irish elements in previous US administrations. IRA terrorist activities in Britain included two pub bombings in 1974 that killed many innocent civilians in Birmingham and Guildford, an attempt to kill prime minister Margaret Thatcher and her cabinet in Brighton in 1983 and massacres at Enniskillen and Omagh in 1987 and 1998.

In the end with American assistance from Senator George Mitchell and the encouragement of President Clinton it was possible to reach agreement in the Good Friday peace accords in 1998 and there has been peace in Northern Ireland ever since.

My firmest prediction for 2019 is that Britain will leave the EU – though perhaps not the Common Market – and that whatever happens the Good Friday agreement will survive Brexit.

Alas I cannot predict that the Kurds will get autonomy in Turkey or that that the Turkish Cypriots will return to the fold in Cyprus.

Opening the doors of the universe