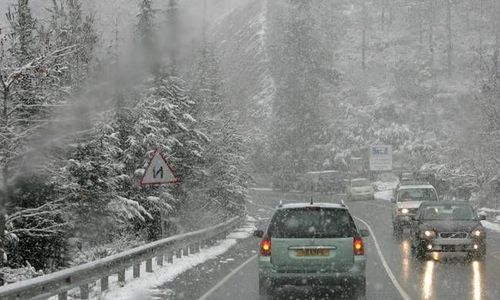 Police said Sunday afternoon that all roads leading to Troodos were open only to vehicles with four-wheel drive, or fitted with anti-slip chains.

A police announcement  said there was light snowfall and limited visibility.

Meanwhile the met office said on Sunday the weather would be unsettled in most area, alternating between bouts of sunshine and rain with some snow in the mountains. There could be storm in more northern and eastern areas, it added.
Temperatures will rise to 15C inland and on the east coast, and 17C on the other coastlines and 5C in mountain areas.

On Sunday night isolated showers are expected with more snow in the higher mountains.
Temperatures will drop to 5C inland, around 8C on the south and east coasts, around 10C on the west and north coasts and at -2C degrees on the highest mountain. More frost will form in the lower mountain areas.

On Monday, at first the weather will be partly cloudy and by afternoon mostly cloudy with isolated showers and the possibility of thunderstorms. The temperature will rise slightly to closer to the average for the time of year.

Tuesday and Wednesday will see occasional cloud and isolated showers with more snow on Troodos. The temperature will fall slightly on Tuesday to just below the norm. No significant change is expected on Wednesday.