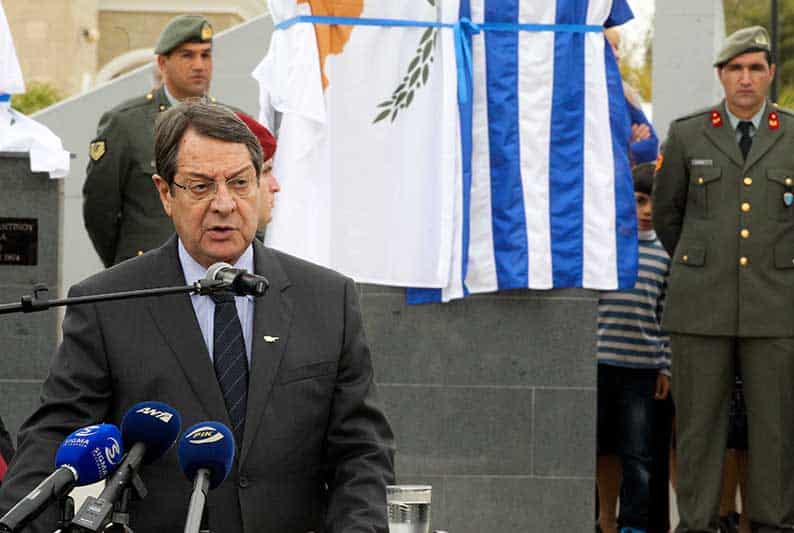 President Nicos Anastasiades on Monday laid out an ambitious to-do checklist for his administration for 2019, promising reform in government while assuring both communities of his commitment to working toward a fair and viable settlement on the Cyprus problem.

In a televised address, the president began with a review of what he described as the government’s accomplishments in 2018, citing among others a four per cent GDP growth rate, bringing unemployment down to 7.3 per cent, and producing a balanced budget for the fourth year in a row.

“With determination we dealt with the inevitable crisis in the co-operative banking sector, while equally significant is the fact that we restored the country’s sovereign to investment grade, with major benefits to the economy,” he noted.

Mentioning foreign policy in passing, the president alluded to the series of trilateral summits with neighbouring nations, the latest having been held in Israel earlier this month.

“Through mutually beneficial collaborations we have developed with the nations of the broader region, we have become a bridge for cooperation between the European Union, the eastern Mediterranean and the wider region.”

Looking ahead, Anastasiades said the ‘Estia’ debt relief project would be kicking in which, combined with the insolvency legislation and the Guaranteed Minimum Income “fully secures the primary residence”.

In January the government will be unveiling a comprehensive housing policy, whose main prongs include creating a ‘social housing fund’ and the introduction of town-planning incentives to tackle the growing problem of affordable housing.

Pensions and benefits to vulnerable groups living under the poverty line would be increased, and cuts to salaries abolished.

Meantime the National Health Scheme (Gesy) is to be implemented “definitively and irrevocably” on June 1 as scheduled, Anastasiades stressed.

“I urge all stakeholders in the healthcare sector to work together, ensuring that we deliver a long-overdue reform, with little or minimal problems.”

His comments on Gesy come amid growing pains for the government, as several groups of private doctors have already signalled they will not be participating in the programme.

Under the government roadmap, the first phase of the scheme is to be rolled out on June 1. This concerns outpatient care provided by personal physicians, specialists, pharmacies and labs.

On education reform – and despite fierce opposition from teachers unions, who implemented work-to-rule at the start of the 2018-2019 academic year – Anastasiades said his administration is determined to press ahead.

Also on the cards was the establishment of a junior ministry for research & development and digital transformation.

Anastasiades promised that 2019 will be the year of major infrastructure projects, helping to boost the economy but also improving the quality of life for people.

His New Year’s speech inevitably covered the Cyprus issue, although missing from the disquisition were any specific goals or actions.

The president described the status quo as a “festering wound” for Greek and Turkish Cypriots alike.

“To remedy the adverse effects [from a non-solution], and with the same political will and with bold initiatives, we shall be working together with the UN secretary-general’s envoy Jane Holl Lute to shape the terms of reference for the resumption of a creative dialogue so that we may reach a settlement that brings peace and stability to our Cyprus,” he noted.

“But a solution, where respect for political equality should not lead to the creation of a dysfunctional structure, which would entail adverse consequences for Greek Cypriots and Turkish Cypriots.”

Critics have harangued Anastasiades for his failure to concretely re-engage in the peace process since reunification talks broke down in the summer of 2017. The standstill has led some to question whether he sincerely desires a solution.

The UN’s Cyprus envoy was last on the island in mid-December, where she held talks with the leaders of the two communities.

Summing up his vision for the new year, the president stated:

“I anticipate that 2019 will be a pivotal year for the future of our country, a year of productive dialogue which will usher in peace, stability and progress for all our people.

Predictions for the Cyprus economy in 2019