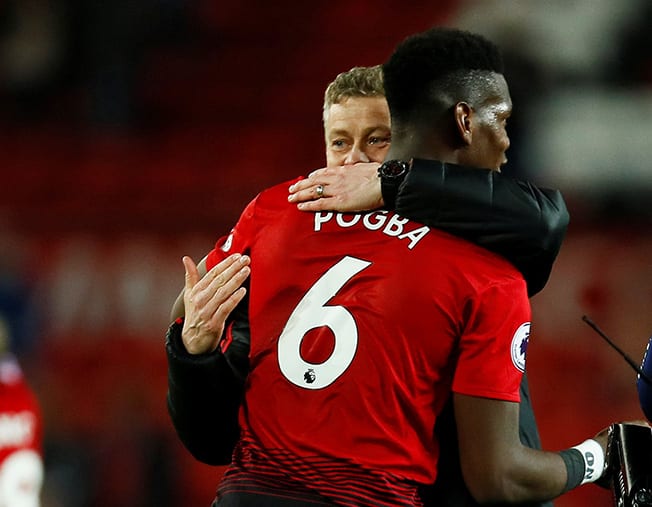 Three wins in three games for Manchester United under Ole Gunnar Solskjaer, 12 goals scored and an Old Trafford crowd that, like the players themselves, are enjoying football again.

No one at United wants to talk about previous boss Jose Mourinho as they want his name consigned to the history books, but then again Paul Pogba wanted to make a point.

Pogba scored twice in Sunday’s 4-1 win over Bournemouth, after a double against Huddersfield Town on Boxing Day, and he exuded confidence and positivity throughout the match and just enough diplomacy after it to avoid a direct criticism of Mourinho, with whom he had a fraught relationship.

“We are Manchester United and we need to be at the top of the league, it is just a reaction of all of the players and everyone is enjoying themselves,” said Pogba.

“It is different, we still won games with the old manager but it is just a different style of playing, we are more offensive and we are creating more chances and that is how we want to play,” he added.

“I always want to do more, but I want to play for the team and play simple.”

After wins over Cardiff City and Huddersfield, United continued to play with a verve and imagination that was missing during the latter stages of the Mourinho reign.

“We needed the win and we had a great performance as well. We are coming back, and there is still a long way to go, but to finish the year like that is beautiful,” said the French World Cup winner.

Solskjaer was full of appreciation for Pogba’s performance whilst offering a hint of what he doesn’t want to see from the former Juventus midfielder.

“That is a top, top performance from a midfielder because it is all-round – it is work-rate, it is dangerous in the box, winning headers, winning tackles and there is no showboating,” he said of Pogba.

“It is touch, pass, move, he plays an efficient game and Paul knows he is at his best when he plays that game,” added the Norwegian.

Solskjaer said he hadn’t felt the need to tell Pogba to cut out the showboating but clearly believes his message has got through.

Woman dies in cliff fall while having photo taken