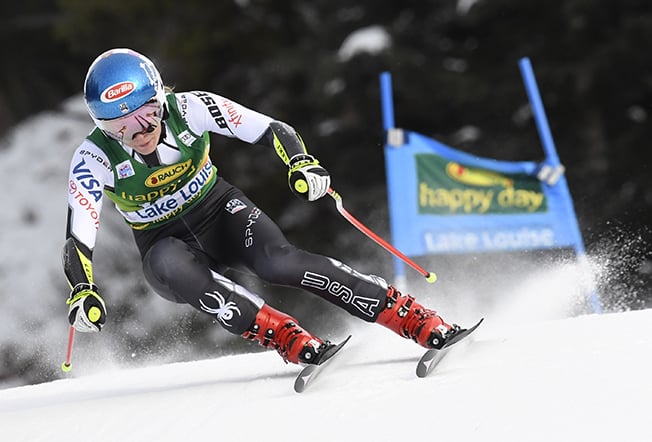 Mikaela Shiffrin of the United States

Mikaela Shiffrin said that surpassing Marlies Schild on Saturday to become the women’s all-time World Cup leader in slalom was bittersweet since she always felt her childhood idol deserved to hold the record.

The 23-year-old American, who surpassed Schild with her 36th World Cup slalom win in Semmering, said she had an emotional dream about breaking the Austrian great’s record while taking a nap before a training run in Lake Louise earlier in December.

“I had a lucid dream about passing the record and I started crying a little bit because there is a large part of me that never wanted to pass Marlies,” she told reporters on Sunday, the day after her victory at the Austrian resort.

“I wanted her to have that record because I always felt that she deserves to hold it,” she explained in Oslo, where she next competes in the New Year’s Day city event on Tuesday.

Shiffrin added that she had become teary-eyed between runs on Saturday before notching her 51st overall World Cup victory to move into seventh on the all-time win list and becoming the first ski racer to win 15 World Cup races in a calendar year.

“Marlies sent me a message pretty much immediately after the race that said thank you for your words and congratulations,” she said of the Austrian, who won 35 times before retiring in 2014.

“The truth is she led the way in slalom skiing, she made it possible for me to do what I am currently doing and I wouldn’t be where I am without her. So I owe her a lot.”

Shiffrin said records were made to be broken and that she would applaud if and when she was dethroned.

“Somebody is probably going to come and take it from me and that’s good,” she said.

“That’s awesome because it means the sport is progressing.”

For now, no-one can touch Shiffrin, who extended her lead in the overall World Cup standings to a handsome 466 points over Slovak Petra Vlhova, who finished second toShiffrin in Saturday’s race.

Shiffrin also leads the World Cup slalom and super-G standings, while ranked third in the giant slalom and ninth in the downhill standings.

In a comment that should send shivers down the spines of her opponents, Shiffrin said she was feeling in top form heading into the New Year.

“A week and a half ago, I was very close to crippled after the parallel slalom in St Moritz,” she said.

“Parallel slalom and city events are so hard on your back, harder than any other event and my back muscles totally went out,” added Shiffrin, who was sidelined from training for a week. “Now I’m back to full capacity.”