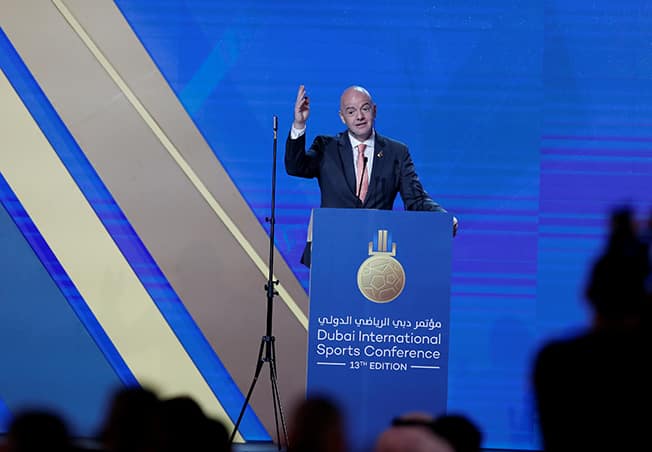 FIFA should if possible increase the size of the soccer World Cup in Qatar in 2022 to 48 from 32 teams, the global governing body’s president Gianni Infantinosaid.

Last month, Infantino said a majority of national soccer federations were in favour of expanding the tournament and a decision was expected ahead of the qualifying draw in March.

Infantino, speaking at a sports conference on Wednesday, also said FIFA was seeing whether it would be possible for some of Qatar’s Gulf neighbours to host some of the matches.

He said last month that it would be “difficult” to stage an expanded tournament in Qatar alone.

Saudi Arabia, the United Arab Emirates, Bahrain and Egypt launched a diplomatic and trade boycott of Qatar in June 2017 that has complicated the prospect of sharing the tournament.

The countries accuse Qatar of supporting terrorism, which it denies.

FIFA voted in 2017 to increase the size of the tournament from 32 to 48 teams starting from 2026 but, since then, Infantino has been mulling the possibility of bringing the change forward to 2022.

“If you think it’s a good thing to have 48 teams in the World Cup, why not try four years before, that’s why we are analysing whether its possible to have 48 teams already in 2022,”Infantino said on Wednesday.

“The World Cup will take place in Qatar with 32 teams. Obviously, if we can increase it to 48 teams and make the world happy we should try it.”

Qatar said it would not take a final decision on the tournament expansion until it has seen details of a feasibility study from FIFA.

The study is expected to discuss aspects of scheduling, the number of required venues, training sites, and how many games per day would be played under an expanded format.

Qatar, a tiny but wealthy Arab nation, has moved ahead with ambitious plan to scale up infrastructure ahead of the 2022 tournament that includes $6-8 billion on eight stadiums and sporting facilities.

“If we can accommodate some of the neighbouring countries in the gulf region which are very close by to host a few games in the World Cup this could be very beneficial for the region and the entire world,” Infantino added.

“There are tensions in this particular region and it’s up to their respective leaders to deal with that but maybe it’s easier to talk about a joint football project than more complicated things.

“If it can help all the people in the Gulf and all the countries in the world develop football and bring a positive message to the world about football, then you should give it a try.”