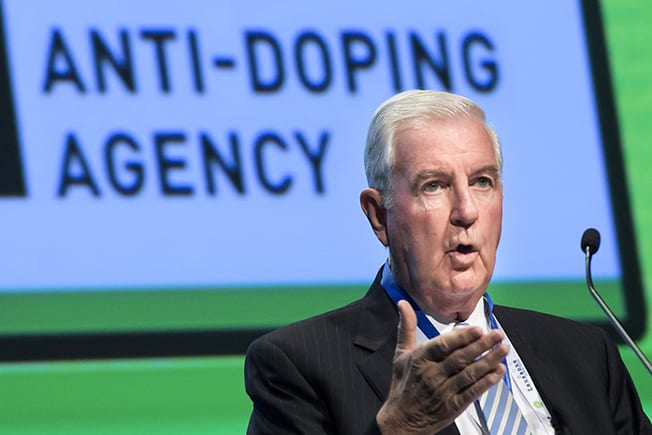 The leaders of 16 national anti-doping agencies have called on the World Anti-Doping Agency (WADA) to immediately suspend Russia once again for failing to comply with the controversial reinstatement deal struck in September.

The wisdom of that compromise agreement was cast into doubt on Monday when Russia missed a December 31 deadline to comply with its key requirement – access to the Moscow anti-doping laboratory at the heart of its state-sponsored doping programme.

As promised in September, the Russian authorities did eventually let a small team of experts visit the laboratory last month but they were prevented from extracting the raw data from its testing equipment because their devices had not been approved, despite no such demand being made before the team’s arrival in Moscow.

The raw data is needed so that global sports federations can proceed with hundreds of potential anti-doping cases against Russian athletes.

Russia’s failure to meet its reinstatement obligations prompted an angry response from United States Anti-Doping Agency (USADA) boss Travis Tygart, who described the episode as “a total joke and an embarrassment for WADA and the global anti-doping system”.

WADA president Sir Craig Reedie was forced to admit he was “bitterly disappointed” by the setback, which has again called into question his judgement when it comes to dealing with Russia.

USADA is one of the 16 agencies to now call on him to reverse the September reinstatement without waiting for the scheduled meeting of its Compliance Review Committee (CRC) on January 14.

In a joint statement, the national anti-doping organisations (NADOs) said: “Russia has failed to meet its obligations.

“Therefore, we now call on WADA to stand firm, enforce the missed deadline and move without delay towards a decision in this matter.

“Recognising WADA had previously scheduled a Compliance Review Committee meeting on January 14-15, NADO leaders now call on WADA to acknowledge the gravity of this missed deadline and call for an immediate review and recommendation from the CRC.

“We recognise RUSADA has been working with WADA in an effort to resolve these issues but the conditions agreed on September 20, 2018, were unequivocal and without the data there can be only one outcome.

“The importance of this situation does not warrant providing a further two weeks for Russia to comply. With the interest of clean sport hanging in the balance, WADA must call for CRC to convene and consider this matter without further delay.”

RUSADA was initially banned by WADA in November 2015 when an independent investigation uncovered systemic doping in Russian athletics.

But a second investigation in 2016 revealed that Russia’s conspiracy to cheat went much wider, was directed by the ministry of sport and had a corrupted RUSADA at its heart – an indictment which eventually led to the International Olympic Committee (IOC) suspending Russia in December 2017.

That IOC sanction, however, was lifted shortly after the 2018 Winter Games in PyeongChang but RUSADA’s suspension meant the world’s largest country was officially banned from bidding to host international sports events and its track and field athletes would have to continue competing as neutrals.

WADA would have lifted that suspension earlier if Russia had complied with the terms of a 2016 “roadmap to reinstatement” agreement but progress on that had completely stalled, with the Russian authorities refusing to budge on its last two items: public acceptance of the state-run programme and access to the Moscow lab, which has been treated as a crime scene since November 2015.

Under IOC and political pressure to break the deadlock, WADA compromised, agreeing to reinstate RUSADA, providing it granted independent access to the laboratory by the end of the year and then released any stored anti-doping samples needed to prosecute cases by the end of June 2019.

Despite Reedie and the five-strong CRC, which is chaired by London-based sports lawyer Jonathan Taylor, assuring them that WADA would not waver in punishing Russia if it failed to keep its side of the bargain, that deal was heavily criticised by anti-doping experts and athletes’ groups at the time.

UK Anti-Doping is conspicuous by its absence from the list of 16 NADOs that have signed Wednesday’s statement but Press Association Sport understands it is reserving its judgement until the CRC meets and makes its recommendation to WADA.

But UKAD’s athlete commission has commented on the latest development, saying its September “concerns have now been found to be completely justified” and WADA must “immediately declare RUSADA non-compliant”.

If WADA does as promised, and reverses the September decision, it can also now hit Russia with further sanctions thanks to its increased powers.

Prior to April 2018, the agency only really had power over its accredited anti-doping laboratories and NADOs, but a revision of its “international standard for code compliance by signatories” means WADA, in theory, can ban Russia from hosting international events without needing the IOC to do it.

This could become very significant, as IOC president Thomas Bach’s New Year message to global sport strongly suggested he believes Russia has already served its punishment for its flagrant cheating and it is time to move on.

Back my Brexit deal and let Britain ‘turn a corner,’ says May

Nadal overcomes blip to scythe down Djokovic in Rome final