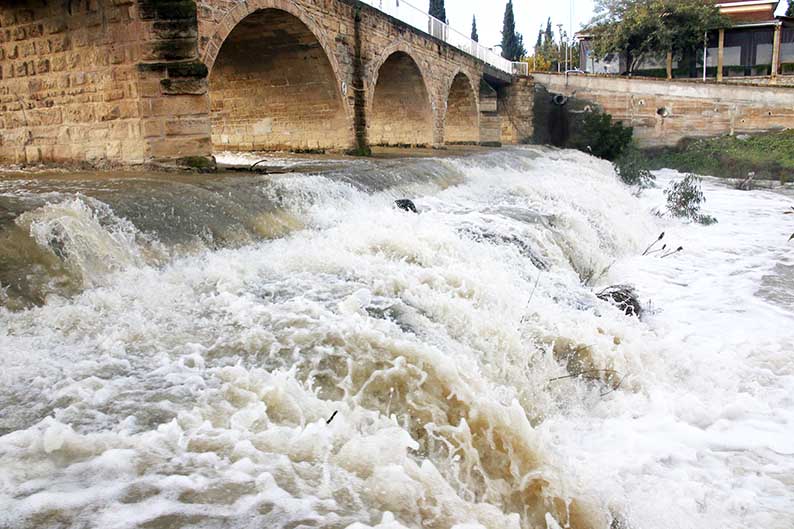 The river in Peristerona Nicosia district on Thursday (Christos Theodorides)

Despite the heavy rainfall over the past few days, Cyprus continues to face a water shortage and the public should still make an effort to conserve, agriculture minister Costas Kadis cautioned on Thursday.

“The rains are certainly welcome, but they do not resolve our problem with water shortages,” Kadis told state broadcaster CyBC.

He warned that the current exuberance at the flow of rainwater into the dams should not turn into complacency, adding that people should continue to limit their water consumption.

The minister revealed that new legislation was being prepared – to be submitted to the cabinet later this month – outlining short, medium and long-term policy goals for water usage.

It would include provisions for additional desalination plants. A decision on building a mobile desalination plant for Paphos would be withheld until the end of January, depending on the water situation at that time.

In Paphos and in other areas, streams swelled into gushing torrents and despite some damage to potato crops, overall farmers were content with the rains.

“It’s been ages since I’ve seen anything like it.”

Numerous roads were closed around the island on Thursday especially in the Paphos and Troodos regions, and police warned drivers of landslides and overflowing rivers while dense fog severely limited visibility.

According to police, the Kelokedaros-Amargetis-Natas road became impassable due the Xeros river overflowing near the Zyripili bridge. For the same reason, the Tselefos bridge had to be closed to traffic.

The road from Ayios Nikolaos to the Pera Vassa picnic area also became impassable because of the accumulation of large quantities of water as is the road from Kouklia village to the Evangelos Florakis memorial.

Excess water had also gathered on the road from Episkopi to Nata, making it impossible for vehicles to use. In the mountains, the old road from Akrounta to Dierona had to be closed because of a rockfall. Due to snowfall, the road leading from Prodromos to Troodos was closed to all vehicles.

However, in spite of the water flow into reservoirs overall capacity was still low, albeit rising, authorities said.

According to data from the Water Development Department (WDD), more than 6 million cubic metres (mcm) of water flowed into the island’s reservoirs during the first two days of the year.

“Following an excellent December, where 16.9mcm flowed into reservoirs, we had a very good start (this year). The first two days of this month gave us 6.140mcm,” WDD senior engineer, Fedros Rousis, told Sigma TV.

He said that on Wednesday alone, 5.2mcm flowed into the reservoirs, which is the best for this winter.

Rousis said that reservoir capacity is gradually rising. At the moment it was at 18.6 per cent compared to Wednesday’s 16.8 per cent.

“We still need a lot more rain to reach full capacity,” he said, expressing optimism that the water flow into reservoirs would carry on even up to April with more rain and melting snow.

The Kouris dam is which the biggest on the island is currently at 13.4 per cent of its overall capacity but some of the smaller ones, such as those of Kalopanayiotis, Solea and Klirou-Malounda have reached full capacity.

The Tamassos reservoir is around 82 per cent full, while those of Mavrokolympos, Pomos and Argaka have reached between 73 per cent and 76 per cent of their capacity.

The heavy rainfall also caused a few rivers to overflow with authorities closing down roads on some occasions.

Average rainfall in December reached 169 per cent of normal for the season, or 178.4mm, according to preliminary data issued by the Met Office.

The cold spell is meanwhile set to continue, with more snowfall forecast for Thursday evening at the Troodos mountains and possibly at lower altitudes as well.

For Friday, the Met service is forecasting isolated showers and strong winds. Temperatures are expected to come to 16 degrees inland and at the coast, 6 degrees on the mountains.

For the weekend, the Met is forecasting partly cloudy weather and isolated showers. On Saturday night to Sunday morning more snowfall or sleet is expected in the mountains, leading to a drop in temperatures.

Motorists can check on the roads situation via the police application and the information page www.cypruspolicenews.com.