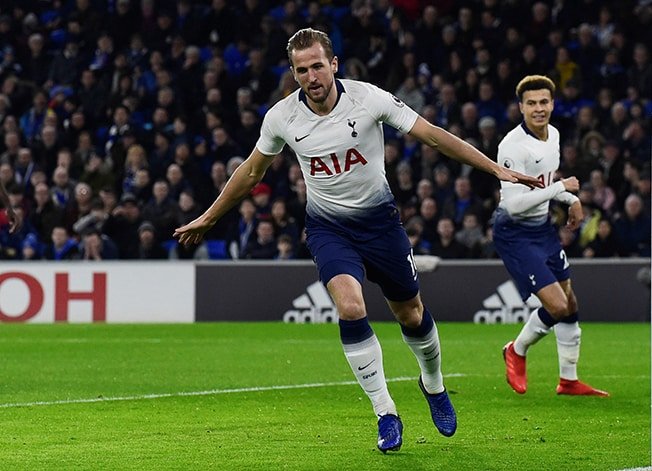 Harry Kane says Tottenham’s Premier League title focus is on themselves and not on what Liverpool and Manchester City are doing.

City and Liverpool meet in a huge showdown on Thursday, with second-placed Spurs able to sit back and relax after their 3-0 win at Cardiff on New Year’s Day.

Spurs are six points behind leaders Liverpool and a point better off than City, having played a game more than their two rivals.

“We’d probably like City to win to make it a little bit closer, but that’s not in our control,” Kane said of the Etihad Stadium clash.

“All we can do is look after ourselves and win our games. Over the last few years we have been in this position with Leicester, and then Chelsea the year after.

“We just have to concentrate on ourselves and winning games is all we can do.

“We will see what happens with Liverpool and City. We can’t think too much about other teams if I’m honest.”

Kane believes Tottenham’s experience will stand them in good stead for the second half of the campaign.

Spurs have finished third, second and third in the last three seasons under Mauricio Pochettino.

“We’ve been there in the title race before and in the past we’ve done well at this stage and won a lot of games,” Kane said.

“In previous years it’s just been the teams above us have won their games as well. We can’t take anything for granted and do what we can do.

“Liverpool are on top form at the moment, they’re ahead, and deservedly so.

“The Wolves game was a kick up the bum for us. We were 1-0 up and all of a sudden we were 3-1 down, it shows that in the Premier League you can’t rest on your laurels.”

Kane completed a full house of scoring at least once against Premier League rivals when he struck the first goal against Cardiff.

He has now scored against all 28 opponents he has faced in the top-flight, but his running and passing from deep caused Cardiff as many problems as his penalty-box play.

“With the way we’re playing this year we have people running in behind and I’m dropping deeper,” Kane said.

“I’m able to pass out wide and it’s always been a part of my game. We’re scoring a few more of our chances now and this season is probably the most assists I’ve had.

“I base my game around creating chances and people who have watched me in the last few years know I don’t just score goals.

“It’s about everything; hold-up play, moving, creating space for others, and passing. Then of course I want to score when I can and, as a striker, you have to do all those things.”