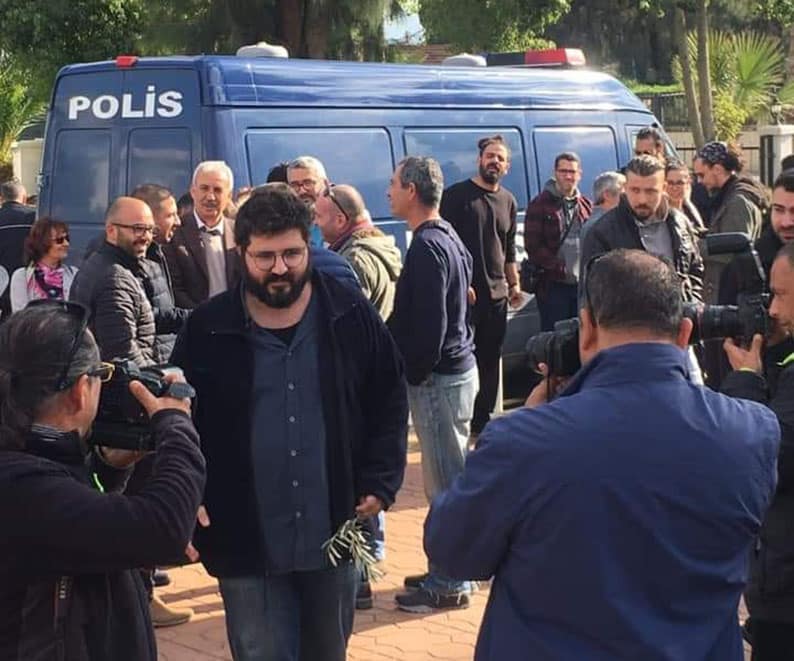 A military court hearing in the north on Thursday refused to recognise Halil Karapasiaoglou, 33, as a conscientious objector and imposed a fine which the Turkish Cypriot said he was refusing to pay, choosing instead to face 20 days imprisonment.

The court ordered the payment of a fine of £2,000 Turkish Lira – around €360 – and a prison sentence of 20 days should Karapasiaoglou fail to pay the fine by 14 January.

“I will not pay the fine. I refuse. In 10 days, I will return and go to jail for 20 days” Karapasiaoglou said after the hearing, speaking to dozens of people who had gathered outside in solidarity.

“If I pay the fine there will be no meaning to what I am trying to do,” he said. “I am ashamed to be living in a country which claims to be the most democratic of all.”

The Turkish Cypriot has been refusing to report for reserve army duty in the north for the past four years for ideological reasons, landing him with four open cases for which he was found guilty on Thursday.

In response, two more Turkish Cypriots, the president and general secretary of the press workers union in the north (Basin Sen), declared that they too would refuse to do reserve duty.

On Wednesday, Karapasiaoglou said that if he was imprisoned, he would seek recourse at the European Court of Human Rights (ECHR), as the failure of the authorities in the  north to recognise the right to conscientious objection, was in violation of European and international human rights standards.

Karapasiaoglou’s lawyer, Oncel Polili, told the court that Turkey was the only country in the Council of Europe that did not recognise the right to conscientious objection.

Representatives of the UN and the European Bureau for Conscientious Objection (EBCO) had observed Thursday’s trial, CNA reported.

MEP Takis Hadjigeorgiou asked the European Commission on Thursday if “the EU [is] prepared to condemn the matter, which constitutes the abuse the of human rights of a person who refused to serve the occupation army” and called on the EU to take action against the Turkish government.

The right to reuse military service is guaranteed by the Charter of Fundamental Rights of the European Union, he said, and conscientious objectors have the option of doing alternative service.

Although “Article 9 does not explicitly mention the right to conscientious objection, whether in the military or civilian sphere,” the Court has nevertheless “ruled that the safeguards of Article 9 apply, in principle, to opposition to military service, when it is motivated by a serious, insuperable conflict between compulsory service in the army and an individual’s conscience or his or her sincere and deeply-held religious or other convictions.”

Whether and to what extent objection to service military falls within the ambit of Article 9 will vary according to the specific circumstances of each case, ECHR adds.

Karapasiaoglou suggested reserve duty was nonsense at a time when people from the two communities socialised and worked together.

“If tomorrow there is a war, we, as anti-militarists, will not fight,” Karapasiaoglou said. “Our grandfathers and fathers had fought in the past, we will not make the same mistake. Our duty towards our country is peace.”

“In the 21st century we don’t see our friends in the south as enemies, we don’t see anyone in the world as an enemy.”

Where do the Kurds fit into Syria’s war?