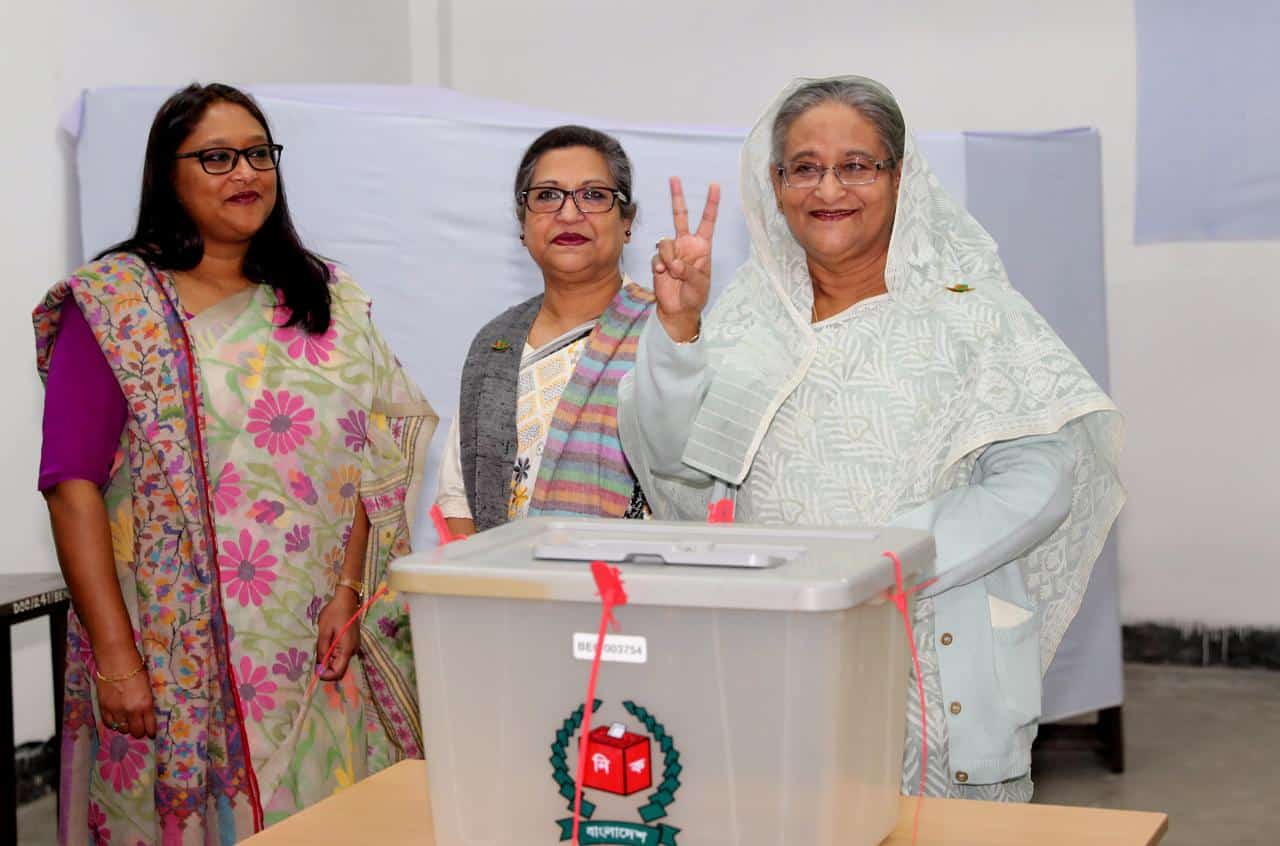 IT ALWAYS looks bad when the ruling party jails the opposition leader just a few months before the election. If only Khaleda Zia, the leader of the Bangladesh Nationalist Party (BNP), had decided to boycott this election like she did the last one, she’d probably still be a free woman. But she decided to run, and so was sentenced to jail time on various implausible corruption charges.

Her rival, Prime Minister Sheikh Hasina, could probably have won a fair election against the BNP, but even with Khaleda Zia in jail she took no chances and arranged a ‘landslide’ in which her Awami League and its allies won almost all the 300 seats in parliament. The BNP only got seven seats, which is also pretty implausible.

After a decade in power, the Awami League is getting arrogant and careless. In Chittagong, the country’s second city, a BBC reporter actually saw the pre-stuffed ballot boxes being delivered to a polling station. (Hint: when pre-stuffing ballot boxes, ensure that they are opaque, not see-through.)

Just another fake election, you might think, no better and no worse than the shambolic vote in the Democratic (or just Dreadful) Republic of Congo on the same day. The outcome in the DRC hasn’t been announced yet (half the voting machines were burned), but you may be sure that the government will win there too. So why should anybody care?

The DRC has the highest extreme poverty rate in the world, with six out of seven people living on less than $1.25 a day. In six decades of independence, the country’s 88 million people have never seen a democratic transfer of power. They hold elections anyway – even China has ‘elections’ – but nobody expects them to change things. Bangladesh is a very different place.

When Bangladesh broke free from Pakistan 48 years ago after a bloody war, it was seen as an economic ‘basket case’, because its only natural resource was its people – and there were too many of them. There are even more of them now – 167 million –but the pessimists were wrong.

Bangladesh works. It is still a very poor and very corrupt country, but its economy has been growing at an average of 6.5% for the past ten years and is now at almost 8%, second highest in the world. Unemployment is low, inflation is low and steady, and it has its population growth under control.

She may have locked up her rival, arrested hundreds of BNP party workers and brought charges against tens of thousands of BNP party members. She may have rigged the election. But the country is doing fine. It just has this endless civil war going on between its two main political leaders, both now in their 70s: Sheikh Hasina and Khaleda Zia.

The ‘battling begums’, as the Bangladeshi press calls them (‘begum’ is a title used to refer to a Muslim woman of high rank), did not start out as enemies. Shortly after the country got its independence in 1971, it fell under military rule for almost two decades. Sheikh Hasina’s father was the prime minister murdered in the first coup; Khaleda Zia’s husband was the ruling general assassinated in the second coup.

The two women managed to cooperate in removing the last military ruler in 1990, and they have been the most important politicians in the country ever since. They quickly became first rivals and then enemies, but they alternated in power in a more or less functional democracy until 2014, when Sheikh Hasina decided she would prefer to stay in power permanently.

Contrary to previous practice, she declared that it would be her government, not a neutral and temporary caretaker government, that ran the 2014 elections. Khaleda Zia protested that the election would be rigged by the Awami League government, and her party boycotted the vote. That was a bad mistake: she handed everything to Sheikh Hasina on a plate.

This time she tried to correct her mistake and said that the BNP would run in the election – so Sheikh Hasina sent her to jail, and rigged the election so ruthlessly that the BNP only won seven seats out of 300.

So what? The country is doing well by all the usual indicators, isn’t it? Yes, it is, but the street violence grows with every election, and BNP supporters everywhere are afraid to let their views be known.

Bangladesh is now effectively a one-party state in which somewhere around half the population hates and fears the ruling party. For the moment the fear predominates, but sooner or later the Awami League will stumble and the hate will be expressed in actions. It would have been better to stick with democracy, even if that meant winning only part of the time.