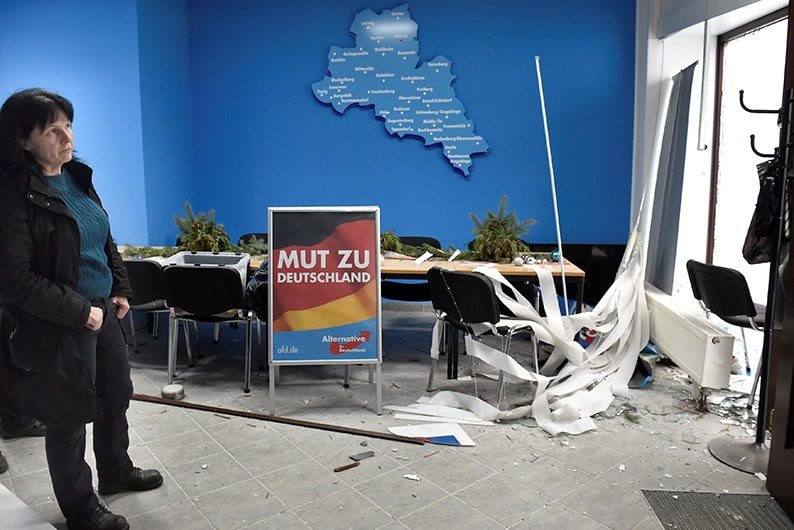 Assistant of the AfD office Silke Forbriger waits inside the office of the Alternative for Germany (AfD) far-right party in the city of Doebeln, Germany, January 4, 2019, one day after an explosion set the office on fire and damaged vehicles and nearby buildings

German police have detained three men suspected of involvement in an explosion that targeted an office of the Alternative for Germany (AfD) far-right party in the eastern state of Saxony.

No one was injured in the explosion outside the AfD office in the city of Doebeln late on Thursday. The blast set the office on fire and damaged vehicles and nearby buildings, Saxony’s LKA criminal investigation office said in a statement.

The LKA said its anti-terrorism unit had determined that the explosion was an escalation in politically motivated attacks targeting AfD offices in Saxony that are usually limited to acts of vandalism.

“The attack against the AfD office in Doebeln is special given that the explosion was intended to harm people,” the LKA said.

Saxony was the site of far-right riots and demonstrations sparked by the stabbing to death of a Cuban-German man in the city of Chemnitz in August, initially blamed on two migrants from Iraq and Syria.

The riots, which featured skinheads performing the Hitler salute and chasing migrants in the streets of Chemnitz, highlighted the depth of a rift created by Chancellor Angela Merkel’s decision in 2015 to welcome almost one million asylum seekers, mainly Muslims from Syria, Iraq and Afghanistan.

Saxony has a large far-right scene. But it is also home to many supporters of the hard-left Die Linke, which is the second-largest party in the regional assembly.

Police said the three men it detained were aged 29, 32 and 50. The LKA’s anti-terrorism unit is still investigating the incident.

The lucky soldier goes to Paphos