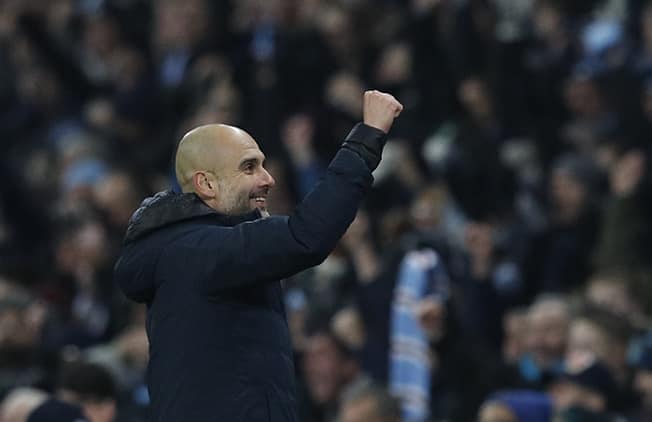 Sergio Aguero, with his seventh goal in as many home league matches against the Reds, and Leroy Sane scored either side of Roberto Firmino’s second-half equaliser to reduce the distance between the two sides to four points.

Had City lost, a 10-point disadvantage would have looked insurmountable even for the defending champions and Guardiola believes they have now breathed new life into their chase.

“We reduced the gap. Still four points is enough points to be calm but it is a good moment to congratulate and say thank you to these incredible players.

“They showed how good they are playing against an incredible team.

“It was a final for us because lose and it was almost over. Now is tight again. Now rest and relax.”

Liverpool manager Jurgen Klopp felt the decision to show Vincent Kompany only a yellow card for his shin-high challenge on Mohamed Salah with the match still goalless was pivotal.

And he questioned just what kind of treatment the Egypt international would have to receive before opponents were severely punished.

“If Mo is on his feet – not in the moment when he jumps over him – we talk differently (about the outcome),” said Klopp, who first spoke about ‘needing blood’ after the treatment Salah received in Saturday’s win over Arsenal.

“That’s why I said last time, ‘Do we need blood? Do we need an open something?’ (wound).

“If Mo can go through (on goal), what happens then? I don’t blame anyone but in a situation like that, make a decision.”

Guardiola refused to be drawn into the row.

“The decision of the referee, you have to ask to the referee. One day in my life I speak quite well about the referee and I understand you can be banned,” he said.

Liverpool had their chances, most notably when Sadio Mane hit the post and John Stones’ clearance cannoned back towards goal, only to be cleared off the line 11 millimetres short – according to goalline technology – of going in.

But defeat to their main rivals – and first of the season – means questions will start to be asked about whether the Reds can maintain their commanding position.

Klopp, however, declared himself satisfied with the position they were in.

“I have so much faith in my players, you can’t imagine,” he added.

“If someone had told me after both games after Man City we were four points up, I would have paid money for it, you cannot believe. It is something not possible.”

Two charged and released in connection to Xylophagou rioting (Updated)