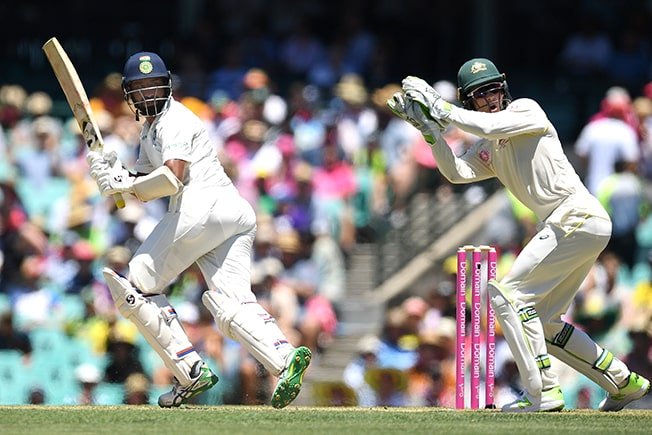 Cheteshwar Pujara fell agonisingly short of a fourth double hundred in test cricket but India’s top order bulwark firmly established himself as the difference between the sides in the ongoing series against Australia on Friday.

The mild-mannered number three’s centuries in Adelaide and Melbourne helped the tourists surge 2-1 ahead going into the fourth and final test in Sydney where a draw will secure India’s first series victory in Australia.

Thanks to his marathon 193, a defensive masterclass spread over 373 deliveries, the tourists find themselves in the box seat again after declaring their first innings on 622-7 at stumps on day two.

“A great lesson to all batsmen in the series and tests in general,” Sri Lankan batting great Kumar Sangakkara tweeted.

“(Pujara) showing how trusting your strengths and being unashamedly dogged in technique and concentration brings great rewards.”

Lokesh Rahul’s horrid run with the bat meant Pujara had to walk in as early as in the second over of the innings.

What unfolded over the next nine hours of action was old-fashioned batsmanship as Pujara forged five significant partnerships, including century stands with Mayank Agarwal and Hanuma Vihari, to help tighten India’s grip on the contest.

An accumulator among swashbucklers in the Indian batting lineup, Pujara’s unwavering concentration and solid defence have served him well in Australia where he has been virtually immovable.

“It’s just great to watch him bat at the other end,” Agarwal said.

“The way he grinds the bowlers. He understand his strengths and he sticks with that. He’s very tight with his defence and he just waits for the bad ball.”

Known for his Zen-like poise and an ability to leave nearly as many balls as he plays, Pujara put some more daylight between him and captain Virat Kohli on Friday with his epic 18th test century which contained 22 boundaries.

The Saurashtra player, who turns 31 later this month, has aggregated 521 runs from seven innings at an average of 74.42, significantly superior to Kohli’s 282 at 40.28.

His running between wickets, especially with a superbly agile Kohli at the other end, has been the subject of social media jokes but Pujara has played to his strengths to emerge as India’s batting mainstay.

The rare lapse in concentration occurred when Pujara, then on 192, edged Nathan Lyon to first slip where the ball eluded Usman Khawaja’s outstretched right hand.

In the end, it was an uncharacteristic burst of aggression that led to his downfall.

Lyon had pitched it up and Pujara stepped out only to drill it back to the bowler and walk away having earned himself a standing ovation from the Sydney crowd.

The lucky soldier goes to Paphos