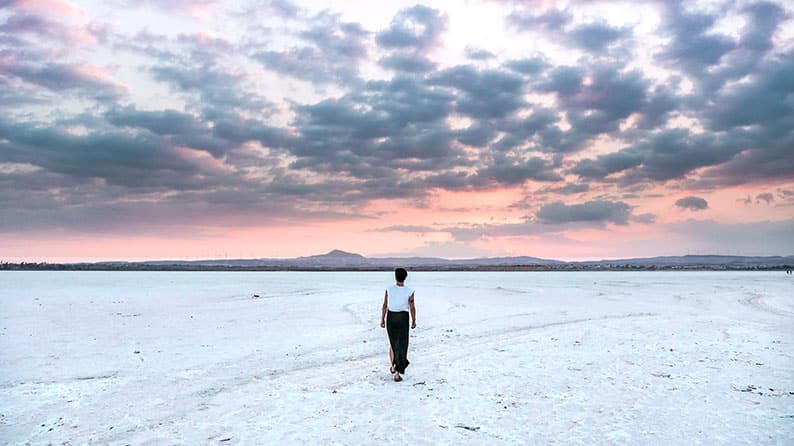 A still of Larnaca salt lake from 'Cyprus Overload'

Through their unique filming and editing techniques, the two female creators behind The Flamingo Society have taken it upon themselves to showcase Cyprus in all its often taken-for-granted beauty.

“We wanted to show Cyprus like it’s never been seen before,” Leila told the Sunday Mail. “Rather than showing the big picture, we wanted to show all the small details that often go unnoticed.”

Viewers are drawn into the film as Andria’s voice speaks over a landscape shot of the Peyia sea caves, shifting to a close-up shot of feet walking barefoot on white ground before two skiers make their way down a Troodos mountain slope and a hand slides across old town Nicosia’s graffiti art.

The island speaks to the viewer through the voiceover: “Do you see me? / I am a natural wonder beyond measure / Shades of blue, reflecting like mirrors in wandering eyes / Untouched / Throughout the echoes of eternity / I stay with you.”

“We wanted to make people feel something through our visual imagery,” Andria said. “Even though what they are seeing might have been seen so many times before, we wanted to show it in a different way, and connected to so many other things.”

The element of feeling was central, the creators said, in both the film’s creation and in what it sought to incite in its viewers.

Depictions of a little bit of everything across the island and its seasonal transformations – snow, beach, people, nature – flash by, taking viewers on a three-minute dream-like journey.

While the film is a burst of clips portraying seemingly unconnected and disparate elements of the Cyprus experience across different cities, altitudes, population groups and seasons, there is a story to every clip and to the film as a whole.

“There is purpose in every shot, and around 80 per cent of the shots are connected in some way to the next,” Andria said, encouraging the viewer to form their own connections and narratives, most importantly, to create meaning through an emotional response.

And there was an overwhelming response, the creators say, especially from locals.

“We were especially amazed by the comments from locals who call Cyprus home, and who were confronted with the fact that they live on such a beautiful island, surrounded by all of this imagery that often goes unnoticed,” Andria said.

This was made possible, the creators say, through Leila’s fresh eyes. Having come from a much larger and busier island, there was beauty in everything in Cyprus, and Andria, having grown up here, soon came to see it with fresh eyes too.

“We started collecting material just under a year and a half ago,” Leila said. “We would go across the island for other projects and take our equipment with us wherever we went so that we were always ready to shoot if anything we saw made us feel something,” Leila said

Fresh eyes and fresh aesthetic tools too, the creators said. “We use a unique, progressive style of editing, going against established stereotypes and representing a different art form,” Leila said.

Wanting to transpire creativity across Cyprus, and spread their artform, Leila and Andria expressed their desire to collaborate with any other creatives interested in forming collaborative projects.

Remand order issued against man for pretending to be someone else