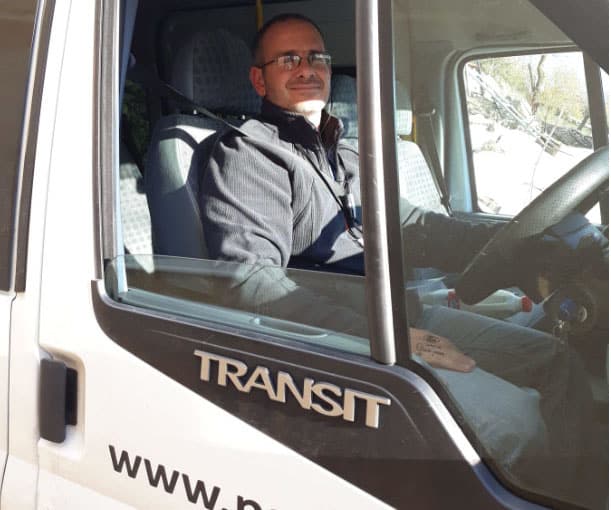 An unassuming Cypriot father of two from Marathounda in Paphos is a rare creature: a bus driver who’s much loved by all of his passengers.

Over the last 15 years, Panicos Chrysanthou, 41, has loaded up his bus and driven his passengers to their destinations across the island, five days a week, going over and above what could reasonably be expected from any bus driver anywhere in the world.

Chrysanthou is the driver of the Pasycaf (the Cyprus Association of Cancer Patients and Friends) bus, a free bus service that transfers all cancer patients, irrespective of their financial status, to other towns for treatment and back.

Every morning, the modest driver gets up at 4.30am, arriving at the Pasycaf centre in Paphos to take his passengers for oncology treatment in Limassol and Nicosia.

Almost painfully shy about being interviewed by the Sunday Mail, Chrysanthou divulged the reason he became involved with the charity in the first place.

“I lost my mum to cancer when I was quite young and I wanted to help these patients who are experiencing what we went through, but we didn’t have any help,” he said.

His said that his mother Ellie, began to feel unwell and was diagnosed with a brain tumour. She underwent an operation but died eight months later.

“It was very hard, I was 18 years old and very close to my mum. It made me sensitive to people in this situation and going to Pasycaf is my way of helping,” he said.

The charity’s bus service started in 1998 with another bus driver and Panicos joined some years later, first working in the office. When the original driver retired in 2003, the charity offered him the job, as he is a qualified mechanic.

“Being the bus driver can be a difficult job. I get to know the patients, but I don’t think that I do anything special for people. I am just doing my job.”

His wife, Karen, a teacher at the International School of Paphos, disagrees

“He does everything he can for his passengers, gets them on and off the bus, gets medication for them. If someone has to stay overnight and they have no-one to go and see them, he will go and sit with them for a little while just to keep them company. He will phone them to see if they’re OK, his phone doesn’t stop ringing. He doesn’t really finish work,” she said.

And his passengers must agree with her, as for the last six years he has been nominated for a Heart of Gold Cyprus award scheme, founded eleven years ago to recognise both children and adults who are extra special in some way.

On December 2, at the annual ceremony SEK in Paphos, he was announced as the 2018 winner. The entire room erupted into spontaneous applause and gave him a standing ovation.

“I am happy to receive this award but I really don’t think I’m doing anything special,” he said.

His wife explains that a couple of days before the ceremony, bad weather caused a landslide which devastated the couple’s garden and almost thundered into their house. Trees, rocks, mud and water came crashing down a hillside behind their property.

“He didn’t really feel like coming to the awards. We weren’t in the mood and feeling down, but we went and I had no idea that he would win. He is so modest but I know he is happy about it.”

The couple has two daughters, Ellie, 17, named after Chysanthou’s mother, and Angelina, 13.

When one of Ellie’s school friends, Jasmitha Marharaja Singh, who had fought a long battle with cancer was taken ill for the last time, he took great care of her family and those close to her. They all praise him highly for helping them through a terribly dark period. Jasmitha died aged just 15.

The couple met at school when Karen was 13 and Panicos, 14 and they have been together ever since.

Karen said that her husband’s phone is always ringing with cancer patients calling for all sorts of reasons.

“They ring for reassurance. He is like a security blanket in a way, helping them to do things when they’re at the hospital too, I know it can be very stressful for them.”

A regular day for Chrysanthou sees him getting up at 4.30am, arriving at Pasycaf in Paphos at 5am to leave with the bus at 5.40am.

“I drive them back too. The time depends on how long things take. People’s situations affect me and

The charity currently has two buses, a 13 and 22 seater are hoping to raise the funds to purchase a larger one. The International School of Paphos is trying to raise money to help with this.

“It can be very hard. You make friends with the patients and then you lose them. For months or a year or more, you have patients that go every day and you get close to them. They chat to me, open up to me and tell me their problems.”

Sometimes he attends their funerals.

“He is their bus driver but also like a doctor, pharmacist, psychologist and friend. He gets very close to them and goes above and beyond. It’s not just a job and it can get to him and is a constant reminder of his mum. It can be difficult,” Karen added.

The best part of the job, he said, is when patients are waiting for their results and get the ‘all clear’.

“That is the absolute best,” he said.

Chrysanthou’s experience with his mother and now as the Pasycaf bus driver has really made him appreciate life and he is an advocate for a healthy lifestyle.

His Heart of Gold award sits displayed on a dresser at home alongside his trophies for 4×4 racing, his passion.

He competes with his team Kofa 4×4 and started in 2008. But even here, modesty reigns. It is his wife who notes that all of his trophies are for first, second or third place.

Stop has prolific use of colour