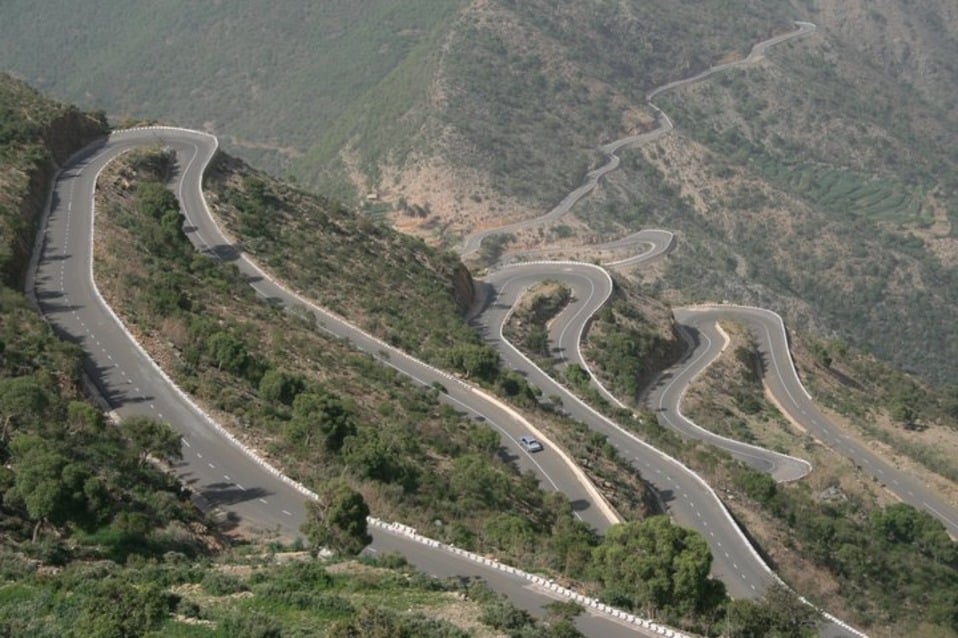 The Asmara to Massawa road in Eritrea

When you venture into the turbulent world of conflict and intrigue, an indispensable requirement is the guiding hand of a street-smart local, someone who knows the lie (and the liars) of the land. This is the redoubtable “fixer”. Part pathfinder, part mind-detector, versatile as a Swiss Army knife, the fixer invariably is a sharp blade, adept at cutting corners, skilled at slashing pathways through the red tape jungle.

Some 20 years ago, the fixer of choice for incomers wanting to quickly master the intricacies of day-to-day dealings with Eritrean officialdom was Robel, a man who knew the system, who counted within it and how to jump the queue.

Like most of his generation, Robel had fought in the independence struggle. Reputedly, he had crewed on one of the outboard-powered launches that, with little more than rocket-propelled grenade launchers, took on Ethiopian gunboats in the Red Sea. Such were the David and Goliath dimensions of Eritrea’s freedom struggle that one never questioned Robel’s credentials.

A stroll down Asmara’s main street was evidence enough that he knew everybody. In a land renowned for its stunningly beautiful people, Robel stood out for a different reason. His unruly hair and a mouthful of off-white teeth clamped in a lop-sided restraining brace gave him a distinctive look which, with the hint of a nautical gait, suggested a character straight out of “Pirates of the Caribbean”.

His crooked grin was beguiling. He also had the soul of a poet. In his free time, Robel could be found adding to the dry wall supports of his stone cottage. This labour of love was dramatically perched on a ledge off the steep mountain road that wound above Asmara’s refuse dump and then corkscrewed in a dizzying 2,500-metre plunge from the highland plateau to the Red Sea port of Massawa 115 kilometres away.

On full moon nights, the two of us would often sit on that stone wall, sipping hot tea while chatting quietly about Robel’s hopes and dreams for his country’s future. The purple-hued valleys sloped away beneath us into a darkening infinity. Aside from our own hushed tones, the only sounds were the lovelorn bray of a donkey, the yodelling howl of a restive dog, and, when carried by the evening breeze, the soft murmurings of faraway voices.

Once, memorably, Robel walked me to the edge of the city dump — an eerie, quarry-like bowl carved out of the brow of a hill, with a sheer cliff-face falling away to one side. Encircled by a teetering amphitheatre of piled up refuse, an elderly nightwatchman sat hunched in a backless chair, the collar of his greatcoat turned up, a muffler knotted around his neck, and a flat cap pulled tightly down around his ears. He looked like he was waiting for his cue in a Samuel Beckett play.

Offstage, we could hear the slow grind of gears as the city’s depleted garbage fleet laboured and groaned its way up from the town. As the trucks drew near and dawn streaked the sky, a swirl of raptors began circling above. Vultures, grey crows, kites, all in a watchful hover high above the old man’s bent head.

The birds weren’t the only ones in line for the dumpster delivery. Out of the mists shrouding the cliff top, a shambling, shadow horde took shape, clambering over the rim and advancing purposefully forwards. Baboons, hundreds of them. Platoons led by warrior males. Trailing behind, the females. The mothers among them carrying their clinging young or clutching the older offspring by the hands, guiding them to the scavengers’ picnic. No need for alarm, the sound of the dawn patrol was enough to get everyone on the move.

“Planet of the Apes”, “Waiting for Godot”, it mattered not – this was a site and a sight for eagle eyes and hungry primates, which, thanks to Robel, I was able to witness in mute astonishment.

Later that week, my own immediate circle of human primates arranged to meet and celebrate New Year’s Eve in Massawa. Since I would be working late in Asmara, my dilemma was how to join them. “Not to worry,” said the ever-resourceful Robel. “I know someone with a car and he’ll drive you.” His friend, he assured me, was one of Eritrea’s last MIG fighter pilots. What that said about his driving skills, I wasn’t sure. When he did turn up at the appointed hour, it was in a ramshackle old Fiat of questionable roadworthiness.

So it was with a certain queasiness that I slipped into the passenger seat alongside the pilot and we lurched off on the rocky road to Massawa. We passed by gorges gouged out of sheer rock face, gingerly skirting 250 metre-deep precipices on one side and a steady stream of oncoming traffic clogging the other side of the twisting roadway.

An hour into the journey we came to an abrupt halt. A truck had toppled over the cliffside, its freight spilt on the slopes below. A mobile crane straddled the narrow passageway and was hard at work trying to retrieve the strewn cargo sack by single sack. Those heading to Massawa could make no further progress – the way onward was blocked. Uphill, Asmara-bound traffic had similarly ground to a halt on the downward side of the crane. No-one could say how long the crane would be there.

There goes new year’s, I thought, knowing there was no other route and little likelihood of the road being opened again in time for us to make our rendezvous.

It was at this juncture that the smartest man in Eritrea (at least on that day) made his appearance alongside our car window. “Are you going to Massawa,” an agitated Korean businessman asked as he scrutinised us eagerly. “Yes”, we said, thinking this must be pretty obvious given our stalled downward trajectory. “I have urgent business in Asmara and I’m trapped too on the other side of this crane so why don’t we swap cars.” In that blinding instance of simple genius, we exchanged ignition keys and details and agreed to meet up in Massawa’s main square soon after midnight, by which time he expected to be back there.

And so we proceeded to Massawa in a brand new, air-conditioned 4X4 while our relieved Korean benefactor took off in a belch of exhaust fumes as our beat up old Fiat set off on the long climb back up to Asmara.

New Year was happily celebrated with our friends and colleagues as planned. Since there were no fireworks, another display of quick-witted improvisation ensured that the old year went out with a bang and the new year was ushered in with the flare of a shining stream of anti-aircraft tracer fire that lit up Massawa’s empty skies.

Shortly afterwards, our Korean friend appeared as promised in the square and returned our old jalopy as we, somewhat reluctantly I admit, handed back his smooth-riding four-wheel drive.

My wish for you in the troubling year ahead is that you have a Robel by your side when in need and that if you should encounter obstacles on your equivalent of the winding road to Massawa that you overcome them with the same spirit of trust, cooperation and ingenuity that we were fortunate enough to experience on the cusp of the year 2001.

Happy New Year to all!

May says if Brexit deal is rejected, UK will be in uncharted territory (updated)