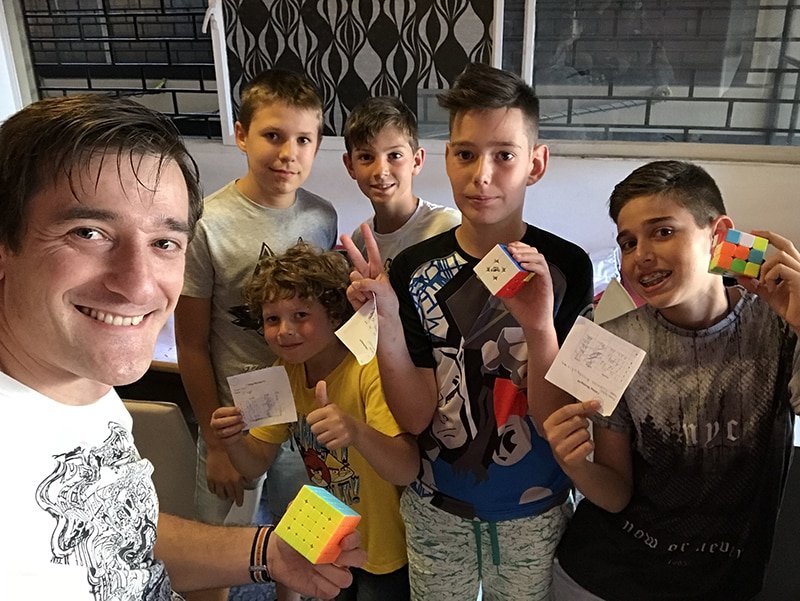 It’s the toy which summed up the 80s. Sure there was the Slinky, the Game Boy, and the Atari, but nothing quite equalled the unrivalled joy – and accompanying frustration – of the Rubik’s Cube. The creation of Hungarian sculptor and architecture professor Erno Rubik, nearly 400 million Rubik’s Cubes have been sold since its launch and, according to the New York Post, one in every seven people on the planet have – at one time or another – tried to solve it. The operative word being solve; remember taking all those stickers off and painstakingly replacing them in a last-ditch effort?

For most of us, of course, it was a delightful diversion: something we could pick up and put down and throw against the wall in frustration. But there were enough hardcore fans (clicking away under their anoraks at bus stops and in schoolyards) to turn this toy into much more than a momentary whim: competitions were launched and, over the years, it became Big Business.

Today, sites such as Twitch stream cubing events to hundreds of thousands of spectators all over the world. And while tuning in to see people less than half your age snap away at the record (at the time of going to press, 23-year-old Australian Feliks Zemdegs holds the record for a Rubik’s Cube with a blistering 4.22 seconds!) may be mesmerising, it’s not nearly as exciting as seeing the whole thing happen live. Which is where Cyprus comes in…

On Saturday, the 3rd official WCA Speedcubing Cyprus Competition takes place, an event fully recognised by the World Cubing Association, who send a delegate along every year to make sure the competition is all above board, and everything complies with the official regulations.

“Every competitor at the event will gain their own official result which will place him or her” – yes, cubing is predominantly a male passion, but there are a number of female devotees around, even here on the island – “in the world ranking,” explains Shamil Magomedov, the competition’s Chief Coordinator and founder of host organisation Cyprus Cubing.

A keen cuber himself, Shamil started Cubing Cyprus on his move to the island from Russia in 2017: “There wasn’t anything of the type in Cyprus, so I founded the organisation myself. Today,” he reveals, “with meetings each month in Limassol, and official tournaments every year, cubing is really taking off. It’s not so developed as in, say, the States or the UK, but we do have a number of very promising cubers on the island. Our results are generally pretty good, and many of our cubers participate in competitions abroad. And all of them,” he adds, “will be at the 3rd official WCA Speedcubing Competition in Larnaca, so come along and enjoy the show!”

Cyprus, it seems is a growing cubing destination (this year’s contestants hail from Latvia, France, Russia, Lebanon and the Netherlands, as well as from all over the island), growing in fame and numbers by the year. And not just in terms of contestants, nowadays it’s not just the Rubik’s Cube which baffles – there are three other iterations which are just as popular, and the third annual Competition sees participants also take on the Pyraminx, Skewb, and Megaminx.

The first is pretty self-explanatory: a pyramidal version, it was developed before the Rubik’s, but only gained in popularity well after the launch of the original; the record for its fastest solve is 0.91 seconds, set by Dominik Górny of Poland on June 24 last year at Byczy Cube Race 2018. Then there’s the Skewb, a sort of combination of the Rubik’s and the Pyraminx comprised of both square and triangular faces; the current world record time for solving this Skewb is held by Jonatan Kłosko of Poland: just 1.10 seconds, less time than it’s taken you to read this sentence! Lastly, we’ve got the Megaminx: a serious challenge for die-hard solvers! With 11 pieces per side and a total of 12 surfaces, you have to be pretty dedicated to the whole cubing phenomenon to take this on; the world record is currently held by Juan Pablo Huanqui of Peru, who solved the puzzle on 28 July 2018 at CubingUSA Nationals 2018 in a time of 27.81 seconds.

Now, we’re not saying we’re going to see times like this at the Larnaca WCA Speedcubing Competition (though there are some pretty good contestants who’ve signed up; our sources tell us at least one of the competitors is below the age of ten, and two have times in the single digits), but it’s nevertheless sure to be a fascinating spectator event.

“Everyone who can solve the Rubik’s cube, 4x4x4, Pyraminx, Megaminx or Skewb is welcome! There are no age restrictions,” says Shamil. “Generally we do tend to see younger participants in competition” – possibly something to do with dexterity and those youthful brain cells! – “but there’s nothing stopping anyone of any age from familiarising themselves with the Rubik’s Cube once more!” 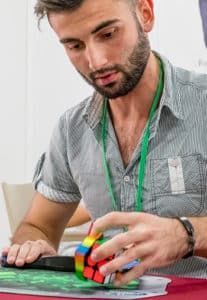 Though the deadline for entry was yesterday (if you were thinking of joining the bright young things in their quest for cubing glory, take this chance at an extra 12 months of practice!) that certainly doesn’t stop you from heading along to the American Academy on the day and watching the magic unfold…

Entrance is free of charge, so why not drop sometimes between 10am and 6pm to watch a few of this year’s 60 contestants? Better yet, grab a child and take them along. The world average age of cubers is 13, and kids as young as eight regularly participate in competitions, says Shamil. For most of us, of course, our Rubik’s cubing attempts are well and truly a thing of the distant past, but there’s no harm in inspiring the next generation!

January 12 from 10am to 6pm at the American Academy, Larnaca. Spectator entrance is free of charge. For more information on both the event and Cyprus Cubers, visit http://cypruscubing.com/