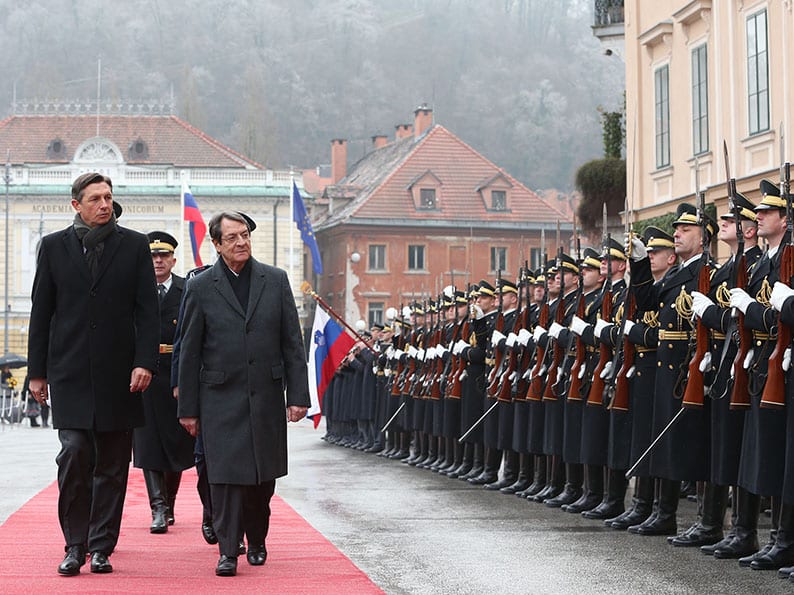 President Nicos Anastasiades with the President of Slovenia Borut Pahor

The presidents of Cyprus and Slovenia on Wednesday agreed to strengthen ties between the two countries following what they described as a constructive meeting in Ljubljana, focusing on bilateral relations, the Cyprus issue, energy, trilateral cooperation, Brexit and the future of Europe.

President Nicos Anastasiades was officially welcomed by Slovenian President Borut Pahor with a guard of honour.

After a number of ceremonial events, the two presidents met one-on-one, which was being followed by talks between the delegations of the two countries and the signing of a Memorandum of Understanding on political consultations between the two countries, inked by the two foreign ministers.

Speaking to the press later, Anastasiades said his contacts had been very constructive and had given them the opportunity to discuss issues of common interest.

Referring to the Cyprus problem, he again spoke of his “determination to continue cooperating with the UN secretary-general for a creative dialogue creative that will allow us to achieve an outcome compatible with the [EU] acquis and international law.”

“If there is goodwill on the part of Ankara, we can achieve permanent and lasting peace to the benefit of relations with Turkey, and peace and stability in the region,” he added.

Anastasiades also thanked Slovenia for its participation in the UN peacekeeping force Unficyp from 1997 to 2001, and invited Pahor to visit Cyprus.

The latter, speaking through an interpreter, said both countries believe in the idea of Europe but also that Europe was inviting its citizens to vote in May’s European Parliament elections “without a vision”.

Pahor also spoke about the migration crisis, saying there should be a common policy.

“If Europe wants to move forward, it has a duty to find common solutions to this problem,” he said.