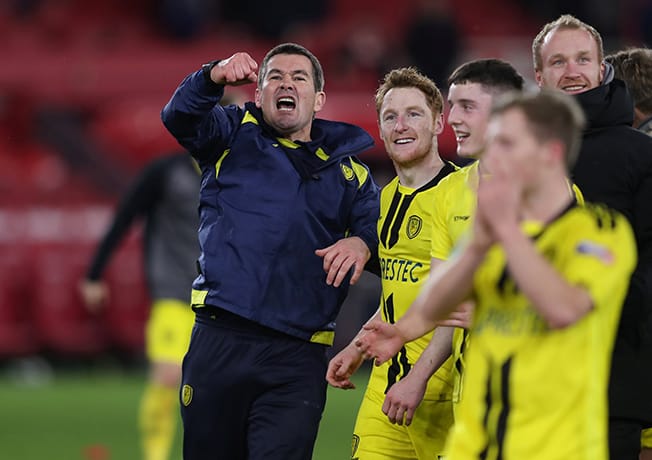 Nigel Clough recognises the gulf in class between his Burton side and Manchester City, but believes their fighting spirit can count for a lot in the Carabao Cup semi-final.

Clough will take his League One side north to the Etihad Stadium to face Pep Guardiola’s Premier League champions on Wednesday night, having not even dared show them any scouting videos.

But it is not by accident that his side have seen off Aston Villa, Burnley, Nottingham Forest and Middlesbrough in this competition so far and he wants them to show what they can do.

“It’s just the determination and the character, which is why we’ve got to this stage,” he said.

“Ability-wise we’re at a different level but we have a certain grit and determination.

“It doesn’t work in all the games and we have had more luck in this competition than within the league over the four or five games.”

League One Wigan knocked City out of the FA Cup last season, but that was a one-off match, and Clough believes for Burton to repeat the trick in a two-legged tie and reach Wembley would resemble one of the biggest cup shocks ever.

“Wigan beat them at home with one shot,” he said. “Over one leg you can do that but over 180 minutes it’s a different ball game, especially with the first one being at their place.”

Clough has proud memories of the League Cup, having won it twice as a player in his father’s Nottingham Forest side.

The League Cup may no longer be everyone’s cup of tea – with Guardiola admitting it was fourth out of four on his list of priorities this season – but it was under Brian that Nigel learned standards should be maintained whatever the occasion.

Even though Forest beat Oldham 1-0 in the final in 1990, an unimpressed Brian Clough ordered his players in for extra training the next day.

“It wasn’t about winning, it was about the performance as well,” Nigel said. “It was standards. We didn’t play particularly well and we were in.”

The elder Clough ordered his players to run six sides of the pitch, but it turned out to be many more.

“It went on with Des until someone pulled him to one side and had a word with him. We must have done it 10 times before he was wrestled to the floor.”

Those standards persisted no matter the occasion.

“We went to Plymouth to play in John Uzzell’s testimonial. We were four-down at half-time,” he said.

“He wasn’t happy. He came in the dressing-room at half-time and said: ‘Every goal you concede in the second-half, I’m fining you £100.’ We conceded another one to lose 5-0 and it was taken out of our money.

“Those were the standards. That’s why they stayed the same for every single match.”

Exxon completes drilling at ‘Delphine’, moving on to ‘Glafcos’

An OutCry of a play