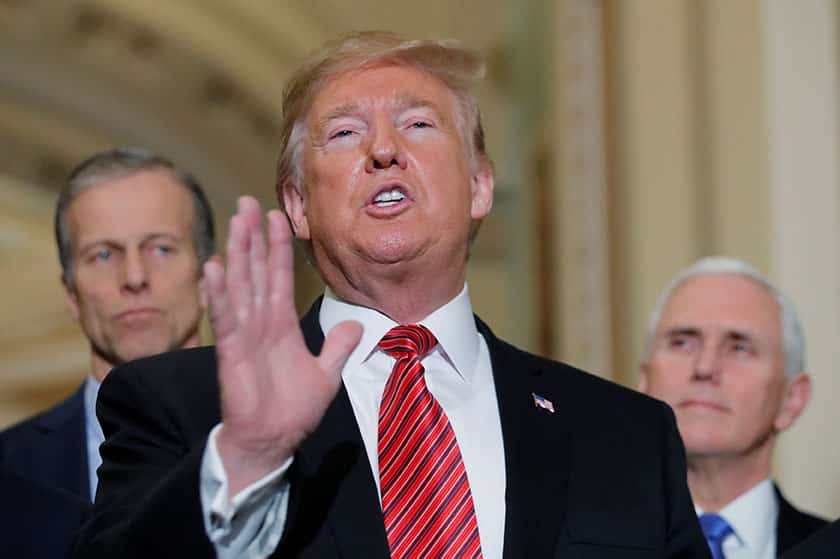 US President Donald Trump said on Wednesday he has a right to declare a national emergency to build a wall on the southern border if no deal with Congress can be reached on funding the project, but Democrats plan to test Republicans’ resolve on the issue.

On the 19th day of a partial government shutdown caused by disagreement over the wall, Trump told reporters at the White House he may move forward with an emergency declaration if Republicans and Democrats cannot work together to resolve the funding standoff.

But House of Representatives Speaker Nancy Pelosi and her fellow Democrats plan to advance a bill to immediately reopen the Treasury Department, the Securities and Exchange Commission and several other agencies that have been partially shut down since Dec. 22.

Democrats are eager to force Republicans to choose between funding the Treasury’s Internal Revenue Service – at a time when it should be gearing up to issue tax refunds to millions of Americans – and voting to keep it partially shuttered.

In a countermove, the Trump administration said on Tuesday that even without a new shot of funding, the IRS would somehow make sure those refund checks get sent.

At the White House, Trump told reporters he did not declare a national emergency during a televised address on Tuesday night because he thought a deal with Congress was still possible.

“Because I think we might work a deal, and if we don’t, I may go that route. I have the absolute right to do national emergency if I want,” Trump said.

The Republican president’s push for a massive barrier on the border has dominated the Washington debate and sparked a political blame game as both Trump and Democrats remain dug in.

In a nationally televised address on Tuesday night, Trump urged Congress to give him $5.7 billion this year to help build the wall but stopped short of declaring a national emergency to pay for it with military funds. “How much more American blood must be shed before Congress does its job?” he asked, referring to murders he said were committed by illegal immigrants.

Trump went to Capitol Hill on Wednesday to attend a lunch meeting of Senate Republicans, and emerged to declare unwavering support for the tough stance he has taken on funds for the wall.

“There was no discussion about anything other than solidarity,” he told reporters. Trump said “a couple” of senators had talked about strategy, but “the Republicans are unified. We want border security.”

Asked afterward if he got the impression in the meeting that the shutdown would end soon, Republican Senator Tim Scott said: “I did not. I think we’re going to be here a while.”

Senate Republican leader Mitch McConnell opened the Senate on Wednesday with an attack on Democrats for not supporting Trump’s demand for wall funds.

Later in the week, Pelosi plans to force votes that one-by-one provide the money to operate departments ranging from Homeland Security and Justice to State, Agriculture, Commerce and Labour.

By using a Democratic majority to ram those bills through the House, Pelosi is hoping enough Senate Republicans back her up and abandon Trump’s wall gambit.

The political manoeuvring comes amid a rising public backlash over the suspension of some government activities that has resulted in the layoffs of hundreds of thousands of federal workers.

Other “essential” employees are being required to report to work, but without pay for the time being.

Later on Wednesday, Trump is scheduled to host bipartisan congressional leaders to see if they can break the deadlock. On Thursday, Trump travels to the border to highlight an immigration “crisis” that his base of conservative supporters wants him to address.

With tempers running high over Trump’s demand for $5.7 billion just for this year to fund wall construction, there are doubts Pelosi’s plan will succeed in forcing the Senate to act.

McConnell has not budged from his hard line of refusing to bring up any government funding bill that does not have Trump’s backing even as a few moderate members of his caucus have called for an end to the standoff.

The funding fight stems from Congress’ inability to complete work by a Sept. 30, 2018, deadline on funding all government agencies. It did, however, appropriate money for about 75 per cent of the government by that deadline – mainly military and health-related programmes.

House Democrats said the shutdown was delaying efforts to begin congressional scrutiny of Trump and his administration.

“We’re taken away from organising and getting down to the substantive business, because we’re trying to get government open for the American people,” House Democratic leader Steny Hoyer said.