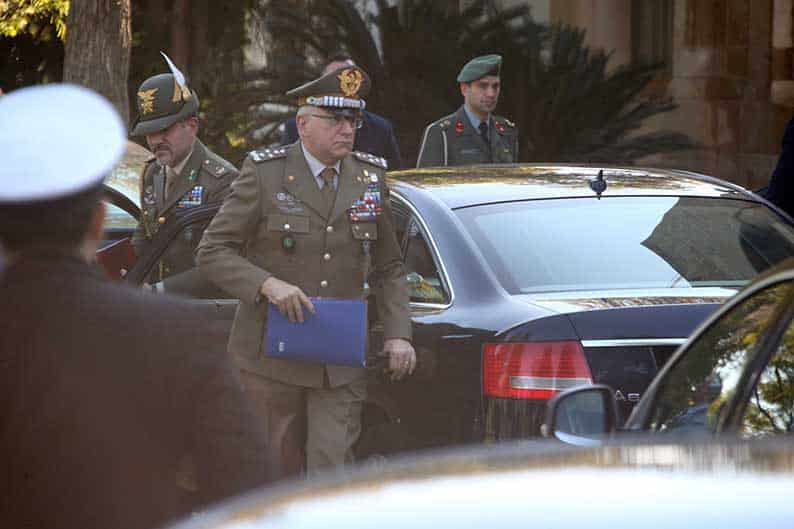 Cyprus is a valuable supporter of regional security and its role is very much appreciated in the international environment, Chairman of the European Union Military Committee (Eumc) Claudio Graziano said on Friday.

Graziano was speaking after a meeting with the Chief of the National Guard, General Ilias Leontaris in Nicosia.

He said Cyprus was a very active member of the European Union and a solid partner and pillar of stability at the South Eastern corner of Europe.

After taking on his position only two months ago, Graziano said it was very important to begin the first year of his mandate by visiting European capitals since it provided a valuable opportunity to better understand the respective viewpoints and concerns.

As regards his meeting with General Leontaris he said they had a very frank and constructive discussion and they covered a number of important issues. “Cyprus has consistently provided high quality contributions to EU operations, I have personally met Cypriots officers in the field and I can testify to their professionalism,” he said.

Graziano also said he was also conscious of the challenges Cyprus is facing with regards to migration, in particular as a consequence of the conflict in Syria and the proximity to the Middle East. “Migration is clearly one of the most important topics on the European agenda, but we are all aware of the difficulties in finding common views,” he added.

The European official said that the Union was currently in a very formative phase with regard to the Common Security and Defence policy, noting that the implementation of the EU Global Strategy on Foreign and Security Policy would shape cooperation for some time to come.

Leontaris said Cyprus was the south-eastern frontier of the EU. “We build reliable partnerships in the region that are enhancing security and stability,” he said.

He added that being on the front line of the most mutable neighbourhood of Europe, Cyprus was ready to cooperate with other member states and other interested states in tackling asymmetric threats and addressing humanitarian crises.

The Chairman of the Eumc is a four-star rank officer representing and presiding over the European Union’s Military Committee, composed of the chiefs of defence of the EU member states.

The chairman is selected by the national chiefs of defence and appointed by the Council of the European Union for a three-year term.

He or she acts as the military adviser to the High Representative of the Union for Foreign Affairs and Security Policy. Cyprus already participates in eight Pesco (Permanent Structured Cooperation) projects, including the Joint EU Intelligence School, which was also discussed with Cypriot officials.

Pesco is seen as the main vehicle for EU military unification.