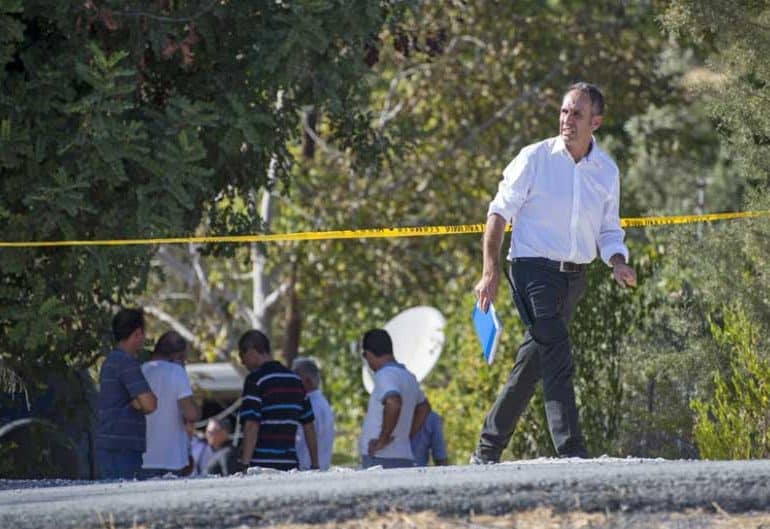 A police investigator at the scene of the crime in Paramytha

The supreme court on Friday raised the prison sentence of a man who killed his son from 10 to 15 years, finding it was inadequate under the circumstances.

Timoleon Themistocleous, 73, was sentenced to 10 years in jail for shooting dead his 19-year-old son Odysseas with a hunting shotgun during a heated argument over the use of a car in October 2010. The incident happened at the family’s home in Paramytha, Limassol.

Themistocleous had appealed the verdict, arguing his was innocent while the state also appealed on the grounds that the sentence was “manifestly inadequate.”

The three-member bench rejected the defendant’s appeal, upholding the criminal court’s conclusions, especially the finding that it had been intentional manslaughter.

The state, on the other hand, argued that 10 years was not an adequate sentence since the victim had not provoked the defendant who killed his son for an insignificant reason.

Also taking into account the lack of remorse, which could have been a mitigating factor, the court had bestowed excessive gravity on the defendant’s age, the state said.

The supreme court agreed that the son’s life had been taken for an insignificant reason. The fact that he was his son added the aggravating factor of domestic violence, the court said.

“Violence in its most brutal, raw, manifestation,” the court said. “Without provocation, over an insignificant event, because the victim refused to return the keys of a car, the father, enforcing his authority in the most brutal manner, killed his child in cold blood.”

The court stressed that the defendant had never displayed any remorse, depriving himself the mitigating factor of admission.

“On the contrary, he tried to lay the blame on his other son, while in the closing statements there was reference, for the first time, to his estranged wife, the victim’s mother, with implicit yet clear suggestions, that she was involved in the killing of her son,” the court said.

The case revealed a tough and ruthless individual and his removal from society for a long time is imperative, the court said.

The argument ensued when Odysseas, who was a conscript, asked to use the car because he was due to report to his unit at 3pm.

His father refused and the two argued. The father went into the house and returned with the gun which he used to shot his son at point-blank range in the abdomen.

Following the shooting, the man’s older son, Alexandros, tried to disarm him and after grabbing the weapon from his father, he hit him on the head with it.

A scuffle followed which left both the father and the 21-year-old needing medical treatment.

No end in sight to Paphos bus strike

Medical profession being scrutinised to root out tax cheats