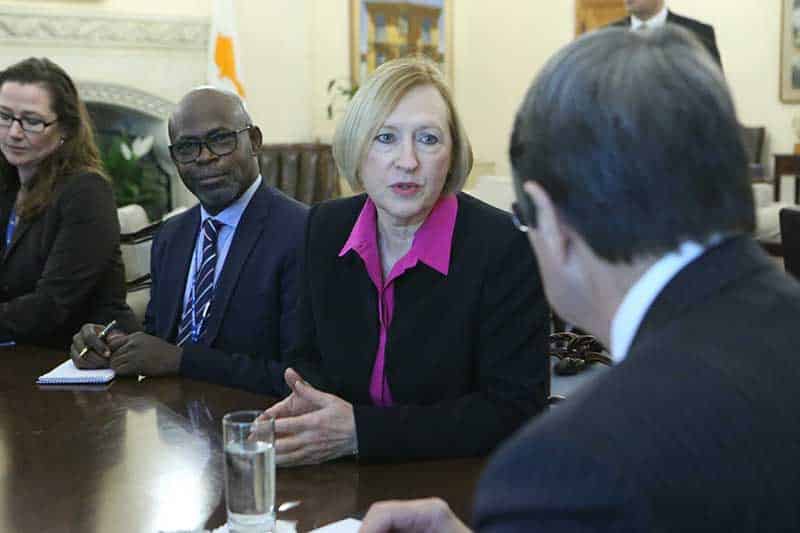 President Nicos Anastasiades said on Friday he believes UN special representative and head of Unficyp Elizabeth Spehar shares his view that the presence of the peacekeeping force in Cyprus was one of the most important factors of stability in the island.

The longer-term future of Unficyp has become uncertain due to changing views internationally on extended peacekeeping missions, especially on the part of the US, and many are being reviewed. Cyprus has been at pains over the past year or so to ensure Unficyp’s six-month mandate keeps being renewed despite lack of progress on a settlement.

The latest renewal is slated for a vote on January 30. Spehar leaves for the US on Saturday to brief the UN Security Council, and also meet with US officials. She met the two Cypriot leaders on Friday ahead of her departure.

“My impression is that Ms Spehar adopts [the position] that the need for Unficyp’s presence seems to be one of the most important stability factors and of avoiding any unwanted developments,” Anastasiades said after meeting the UN official.

Government Spokesman Prodromos Prodromou earlier also referred to the meeting saying the president had “underlined once more the necessity for the presence of Unficyp”.

Prodromou said Anastasiades realises that there are discussions and thoughts for a review of UN peacekeeping missions. “However during the discussion with Spehar he underlined the reasons why in Cyprus, particularly today, the mission should be continued ensuring, among other things, that conflicts and tensions are avoided, something which is necessary since we are in a situation before the resumption of negotiations”.

A second message conveyed to Spehar according to the spokesman was Anastasiades’ readiness for a resumption of negotiations, in line with what he has told to the UN Secretary-General’s envoy Jane Holl Lute. Lute, who is talking separately to the two sides to facilitate the drawing up of terms of reference for new talks, is due back at the beginning of next month.

He spokesman urged patience on the Unficyp issue until the Security Council meets.

“We believe that the Cypriot government, via the foreign ministry, its diplomatic mission and quite a few contacts the president himself has had, has made its case and has put forward arguments as to why Unficyp’s presence is necessary and we believe our position will be met with understanding,” he added.

Asked whether the UN agreed with the necessity of maintaining Unficyp’s presence on the island Prodromou said: “Yes, this is something positive and we should add it to the picture as a whole that the United Nations’ view is a similar one with that of the Cypriot government.”

Spehar on Friday, after meeting Anastasiades, said she had a “very good meeting” with the president and his associates including Foreign Minister Nicos Christodoulides, adding that she talked to them “about my upcoming trip to the United States which I think will be quite important.

“I will be leaving tomorrow evening for Washington DC first of all where I will be meeting with senior officials at the State Department probably also the national security council there to talk about Cyprus and their current views,” she said.

Spehar added that “then I will move on to New York where I will be meeting with senior officials in the (UN) Secretariat, including the Secretary-General.

The UN official continued saying that she “will also be briefing the troop-contributing and police-contributing countries of Unficyp, of our peacekeeping mission because they play a very important role in supporting our mission with our military colleagues here on the ground.”

Ultimately, she stressed, “I hope to have a very good session with the Security Council on the 23rd ahead of their consideration of our mandate renewal.

“The renewal of the Unficyp mandate is likely to be considered by the Security Council members and decided at the very end of this month,” she said.

Unficyp arrived in Cyprus in March 1964 after intercommunal fighting broke out. The mandate of the force is renewed every six months by the Security Council.