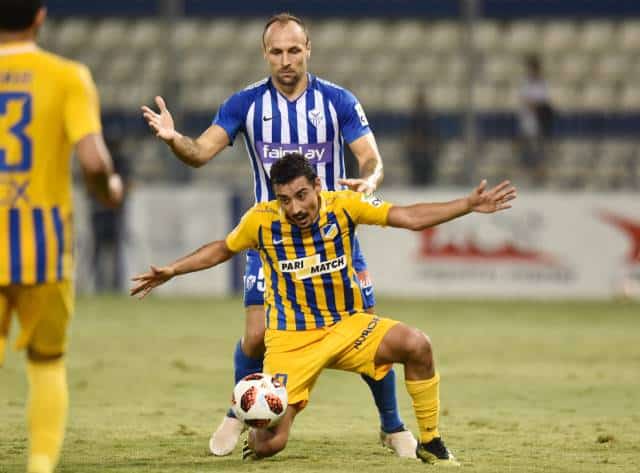 Since losing to AEK towards the end of November, Apoel have gone on a five-game winning run that saw them move to the top of the table. They host Anorthosis in Nicosia on Saturday

Two games stand out in Round 16 of the Cyprus football championship with leaders Apoel taking on Anorthosis, while third-placed Apollon entertain the sleeping giants of Omonia, at the Tsirion stadium.

Since losing to AEK towards the end of November Apoel, have gone on a five-game winning run that saw them move to the top of the table.
The architect for most of these wins was the mercurial Jordanian star Mousa Al-Taamari who will be sorely missed for this game (and probably a couple more) as he is on international duty with his national side in the Asian Cup.

Without him, Apoel lack penetration in the final third of the field, and their coach Paolo Tramezzani knows that all his players will need to perform at their very best if they are to secure their sixth consecutive win against the only side in the league that they have not been beaten away from home.

Young Hungarian striker Norbert Balogh is favourite to replace Al-Taamari with Giorgos Efraim also pushing hard for a starting berth.
Anorthosis have improved considerably since Jurgen Streppel took charge of the team but they still find themselves 11 points from Apoel in fourth place.

They picked up just two points from their last three games and could only draw at home to relegation-troubled Alki last week.
Their summer star signing Ricardo Laborde has been included in the squad after a lengthy period out injured while experienced defender Danijel Pranjic is certain to start the game after serving his one-game suspension last week.

Apollon will be hoping to put an end to a disastrous run that saw them collect just three points from their last four games.
The European campaign has taken its toll on Sofronis Avgoustis’ side, which has lacked energy and freshness, something that characterised their play up until the end of November.

Avgousti will be happy to see the return from injury of midfield enforcer Esteban Sachetti who has not played since December 10, but there is a question mark over the availability of first choice striker Anton Maglica who will face a late fitness test.

Omonia coach Yiannis Anastasiou said that he wants his side to build on their recent success against AEK, saying: “Our players are finally playing for the team and not just for themselves”.

Pafos FC are at home to Nea Salamina in what should be a closely contested game. Both sides lost last week and will be looking to return to winning ways for different reasons though.

Pafos FC need the points to steer clear of the relegation zone while Nea Salamina will increase their chances of a top six finish with the win.

Elsewhere two more teams battling against relegation – Enosis and Doxa – square off in Paralimni while the last of the weekend games sees inconisistent AEK take on bottom of the table Ermis Aradippou.

The final game of the round takes place on Monday between Alki and second-placed AEL.