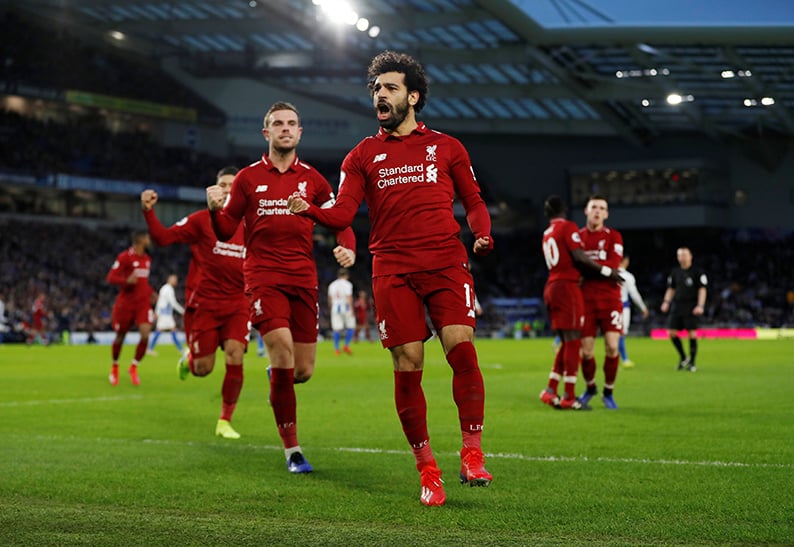 Liverpool went seven points clear at the top of the Premier League and bounced back from two successive defeats in all competitions after a Mohamed Salah penalty gave them a 1-0 win at Brighton & Hove Albion on Saturday.

The result put Liverpool on 57 points from 22 games, seven ahead of closest rivals Manchester City who are at home to Wolverhampton Wanderers on Monday. Third-placed Tottenham Hotspur, who have 48 points, host Manchester United on Sunday.

Liverpool produced a clinical if unimpressive performance on the south coast, having lost 2-1 at City in their previous league outing before being beaten by Wolves in the FA Cup third round by the same scoreline.

After a dour first half, Salah produced a moment of trademark individual skill to win the spot kick he converted five minutes into the second half after Pascal Gross fouled him following the Egyptian’s neat footwork in the penalty area.

Xherdan Shaqiri, who got a rare start on the right flank in a reshuffled 4-2-3-1 formation, missed Liverpool’s best chance in the opening half when he headed inches wide after Trent Alexander-Arnold’s cross.

Meanwhile, Burnley beat Fulham 2-1 at Turf Moor on Saturday thanks to two own goals to make it three straight league wins for Sean Dyche’s side and leave the visitors deep in relegation danger.

German international Andre Schurrle put Fulham, without an away win this season, ahead in brilliant fashion in the second minute, bringing down a long ball from Denis Odoi and blasting, first time, past Tom Heaton.

Burnley got back on level terms though in the 20th minute when Jeff Hendrick’s low drive was turned into his own net by Fulham defender Joe Bryan.

Three minutes later and Hendrick had forced another own goal — his drive headed in by Odoi to put the Clarets 2-1 up.

Burnley defender James Tarkowski had to clear a Luciano Vietto drive off the line shortly after the interval and Fulham had most of the pressure after the break without creating many clear-cut chances.

Burnley did not have a shot on target in the game but move up to 15th place with the win, while Fulham are next to bottom on 14 points, five points from safety.

At the King Power Stadium, Southampton moved out of the relegation zone with a 2-1 win over Leicester City in the Premier League on Saturday despite playing half the match with 10 men.

Saints came into the contest having picked up four points in their last two Premier League away games, and found themselves in front after 11 minutes through James Ward-Prowse’s penalty.

Their task was seemingly made more difficult when Yan Valery was sent off for a second yellow card just before halftime but Shane Long squeezed the ball home to double Southampton’s advantage just before the break.

Leicester committed more bodies forward in the second period and soon got themselves back in the match through Wilfred Ndidi’s scrappy goal in the 58th minute.

No team has given up more points from leading positions than Southampton this season, but they dug in and held out for another three crucial points.

Church liturgies have become a time only to daydream.