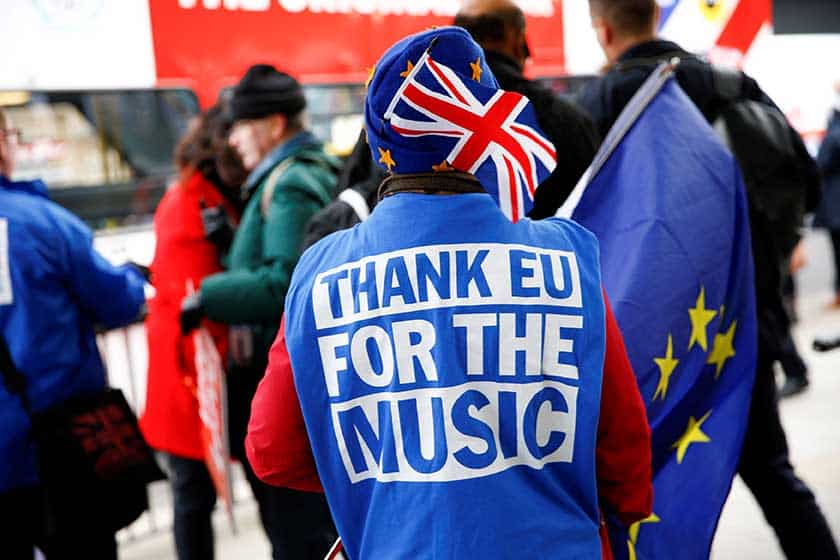 An anti-Brexit demonstrator outside the Houses of Parliament in London

There’s no need to practise bleeding, as the soldiers say, but the British government didn’t get the message. On Monday, it paid 89 truck-drivers £550 each ($700) to simulate the immense traffic jam that will happen in Kent if Britain crashes out of the European Union without a deal at the end of March.

The drivers had to bring their vehicles to Manston, a disused World War Two-vintage airfield in Kent, where the government is planning to park 4,000 big trucks if a ‘no-deal Brexit’ on March 29 leads to new customs checks on trucks heading for Europe. Every extra two minutes’ delay at customs, say the experts, would mean another 15 km of trucks backed up on the roads leading to the cross-Channel terminals.

So the drivers parked their trucks on the airfield, then drove down to the port in convoy while the traffic-control experts measured…what? This wasn’t the 10,000-truck gridlock jamming the roads that might happen in late March. It was a single file of 89 trucks driving sedately along an uncrowded road. It looked like an exercise in pure futility, a Potemkin traffic-jam.

Yet it did have a rational purpose – a political purpose. It was being staged to persuade the British public, and especially the British parliament, that Prime Minister Theresa May’s Conservative government really will take the United Kingdom out of the EU without ANY deal if parliament does not accept HER deal.

May’s deal is almost universally disliked. The Remainers hate it because they don’t want to leave the EU at all, and the Brexit hard-liners in her own party hate it because it keeps Britain too closely tied to the EU.

Never mind the details – they are almost theological – but the upshot is that May cannot get parliament to pass the exit deal she made with the EU, which would at least keep the trade flowing. She just doesn’t have the votes. And she can’t get the EU to amend the deal either.

The opposition to her deal in parliament is so strong that she cancelled a scheduled vote on it a month ago because she was bound to lose it. She is now committed to holding the vote on January 15 – but she still doesn’t have the votes. So she is threatening to jump off a bridge, and take everybody else with her, if they don’t back her deal. It has become a game of Chicken.

The charade in Kent is part of a government show-and-tell campaign to prove that she really means it. So are the predictions that the chaos at the Channel ports will be so bad that Britain will have to charter planes to bring scarce medicines in, and that supermarket shelves will be bare (Britain imports 30 per cent of its food from the EU), and that zombies will rule the streets. (I made that one up, but you get the picture.)

The problem is that nobody believes her. May has manipulated the parliamentary rules and schedules to make it appear that there are no legal alternatives except her deal or a catastrophic no-deal Brexit, but she just doesn’t convince as a suicide bomber. Indeed, there was a vote in parliament on Monday night that blocked the government’s ability to make tax changes connected with a no-deal Brexit without parliament’s “explicit consent”.

That doesn’t actually mean that it cannot happen, unfortunately. Parliament can block her deal, but unless it can agree on some other course of action Brexit happens automatically on March 29 – without a deal. And that really would be nasty.

How nasty? William Hague, a former leader of the Conservative Party, summed it up well in the Daily Telegraph: “I don’t know what will follow a rejection of [May’s] deal…a constitutional shambles, a second referendum shambles, a no-deal exit shambles, a Corbyn [Labour government] shambles. I just know that it will be an abysmal shambles.

“People who say that the deal is the worst of all worlds haven’t understood how bad things might get,” Hague concluded. As May herself admits, a no-deal Brexit is “uncharted territory”.

So what will really happen when parliament starts voting later this month? There will almost certainly be more than one vote, as the 650 members of the House of Commons, no longer constrained by party loyalty – it’s too important for that – swing this way and that. But there may not be a majority for any specific course of action, in which case parliament will probably end up voting for a second referendum.

May has sworn that she will never allow that, because it would be a betrayal of the 52 per cent who voted ‘Leave’ in the first referendum in June 2016. But in the end she probably will allow it, because she is not a suicide bomber.

A law that could do more harm than good