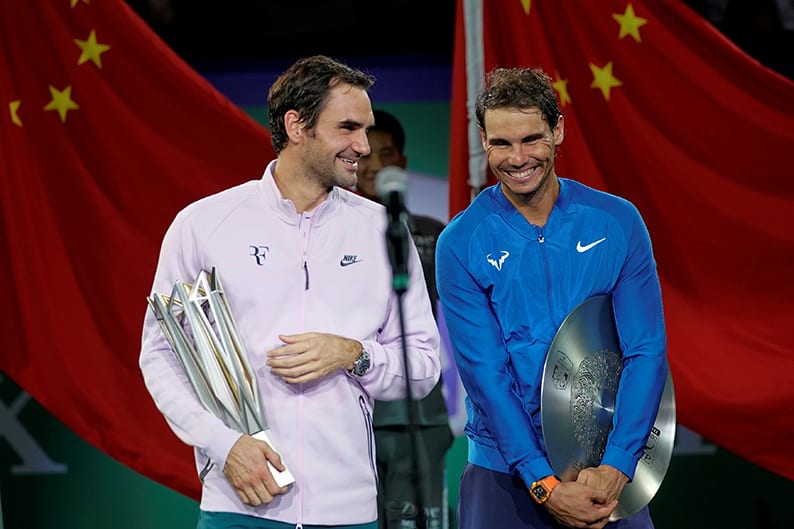 Roger Federer of Switzerland and Rafael Nadal of Spain

Novak Djokovic and Roger Federer loom over Melbourne Park for the year’s opening Grand Slam as favourites for the Australian Open as questions remain as to whether one of Generation Next could finally end their stranglehold.

The Serbian world number one and his Swiss opponent have won eight of the nine titles on Rod Laver Arena since 2010 and 11 of the last 13 on the bright blue courts in central Melbourne.

Both have six titles each, and are seeking to break a three-way tie for the most victories withAustralia‘s Roy Emerson.

While Federer has won the tournament for the last two years, Djokovic’s history in Australiaand rediscovery of his form last year means the world number one will be the man to beat.

The 31-year-old went into a bewildering slump in mid-2016 that only ended when he won Wimbledon last year before he went on to claim his third US Open crown and move to 14 Grand Slam titles, three behind Rafa Nadal.

The Spanish world number two, however, is battling another leg injury that forced him out of the Brisbane International last week and it is apparent that hard courts are putting undue stress on the 32-year-old’s body.

He retired in the quarter-finals against Marin Cilic last year in Melbourne and suffered yet another knee injury that forced him out of the US Open semi-finals before he had ankle surgery in November.

Federer, however, continues to defy the odds at 37 and prepared for his title defence with some convincing performances in the Hopman Cup in Perth last week.

The 20-times Grand Slam winner’s victories over Greece’s world number 15 Stefanos Tsitsipas and world number four Alexander Zverev prompted the German to playfully quip that he was tired of Federer winning everything.

“I mean, you’re 30-whatever. Why? Just why?,” Zverev asked jokingly of Federer at the Hopman Cup trophy presentation.

The 21-year-old Zverev appears the most likely of the younger generation hoping to end the world’s top three’s domination of Grand Slams, having beaten Federer and Djokovic at the ATP Tour Finals in London last November.

While others in ‘Generation Next’ like Austria’s Dominic Thiem and the 22-year-old Russians Karen Khachanov and Daniil Medvedev could cause upsets, it is debateable whether they can win seven matches over 14 days.

Two of the older generation who have shown they do have that ability — Britain’s Andy Murray and Switzerland’s Stan Wawrinka — could be dangerous floaters in the draw.

Murray, a five-time finalist at Melbourne Park, spent most of last year recuperating from hip surgery and looked rusty last week in Brisbane but declared himself pain free.

Wawrinka, the 2014 champion, is also coming back from knee surgery and a back injury in the second half of 2018, but typically flies under the radar through Grand Slams.

Exxon’s drilling: all outcomes are possible