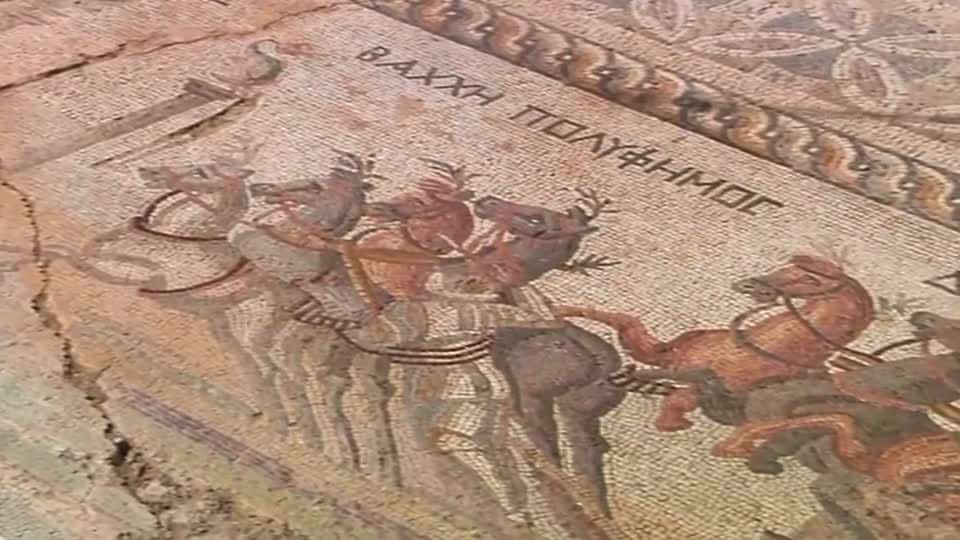 The mosaic at Akaki dates from the fourth century AD and depicts scenes from a chariot race. The full mosaic was seen briefly for the first time in 2016

The antiquities department has plans for two big ancient mosaics for this year, one in Larnaca and the other one in Akaki, outside Nicosia. It takes time, work, and many careful deliberations however before such big excavations can be preserved properly and displayed to the public.

Both of them are well worth the effort.

The rare mosaics in Larnaca were discovered in 2016 and date from the second century AD and include a Roman public bath with a floor depicting the 12 feats of Hercules.

The ornate mosaic in Akaki, probably part of a villa belonging to a wealthy individual, dates from the fourth century AD and depicts scenes from a chariot race.

Excavations of the four-metre wide, 26-metre long area began in 2013 and the full mosaic was seen briefly for the first time in 2016.

According to the BBC, only nine similar mosaics, showing a hippodrome race, have been found at ancient Roman sites.

“The hippodrome was very important in ancient Roman times, it was the place where the emperor appeared to his people and projected his power,” said archaeologist Fryni Hadjichristofi.

The excavation of the Larnaca mosaics are hopefully going to finally be completed this year, said archaeologist Anna Satraki who is in charge of the project.

The antiquities were unearthed while the Larnaca sewerage board was carrying out road works in the area, but it soon became clear that they could not be excavated further as a building was in the way.

An uninhabited and abandoned house on the plot of land needs to be demolished before uncovering the antiquities can be completed.

The land registry will decide soon to give the go-ahead for expropriating the plot of land under which much of the site is situated, Satraki believes.

Only when the mosaic is completely revealed can the department of antiquities decide what to do with it, whether to leave it in situ or move it.

“We will decide where it will be better preserved,” Satraki explained, “in the open air or for example in the Larnaca museum.”

There are related plans to excavate the harbour of ancient Kiti, for which tennis courts in the area have started to be removed. The aim is for this to become an archaeological site including the museum, the harbour and the mosaics.

It would not be the first time a big mosaic has been moved. Greece is one example where it has been successfully managed when the mosaic of the Epiphany of Dionysus was moved to the local Archaeological Museum of Dion for restoration and protection between 2015 and 2017.

The position and shape of individual mosaic stones were first recorded. The mosaic was then divided into several plates which could be transported and reassembled at its destination.

The large stone mosaic illustrating the Greek god in a chariot pulled by panthers, dates back to the late-2nd and early 3rd century AD. It was unearthed in 1987 by archaeologists in Dion, Greece, a village near Mount Olympus.

Larnaca mayor Andreas Vyras just wants the matter resolved and is more concerned with the residents than the details of the excavation.

He said it doesn’t matter if the land registry or the antiquities departments are to blame for the long delay, what matters is that it is causing serious problems for the people living in the area.

Since 2016, when the mosaics were covered with sand, a large part of a road in the city centre has been closed.

“What is happening is unacceptable because for 14 months the expropriation of the abandoned house should have proceeded, which has not been done,” the mayor said.

“Even the simplest everyday things, such as the transport of garbage, shopping, furniture, even to cut grass from their gardens are difficult, given that much of the road has been closed and they are forced to their park their vehicles far away.”

Excavations in Akaki, the other big important mosaic, were finished last year, but that does not mean the work is over.

“The conservationists will continue their work later in the spring or early in the summer,” Hadjichristofi said. “It has not yet been decided exactly when.”

For now, these mosaics, like the ones in Larnaca, are covered to protect them from rain and housed under a shelter.

When winter is over, the stones will be uncovered little by little while the whole mosaic will be kept under the shelter, the archaeologist said. This way, the conservationists will clean and stabilise the stones bit by bit while the rest remain protected. Some of the stones are very well preserved, others are fragile, hence it is not clear how long the work will take.

Only when the work is finished will the site be opened to the public. This may be this year, or it is possible that the whole area will have to be covered again over the next winter for further conservation to take place next year.

Even when this part of the job is done, the area around needs to be carefully examined to establish what kind of building the mosaics were part of.

“We have many other jobs to do, but we try to spend the maximum time on this one as it is very important,” said Hadjichristofi.