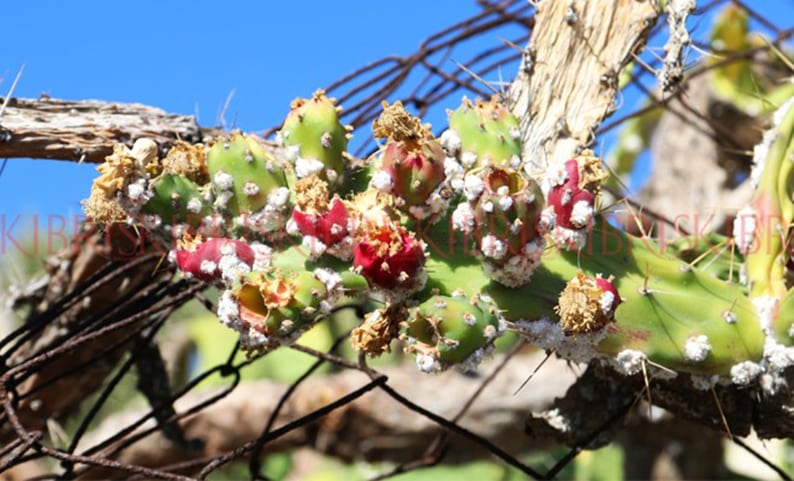 Cotton mealybug forms white lumps on the fruit, quickly killing off the plant

Varosha, the ghost city of Famagusta which has been left to decay since 1974, has become a breeding ground for disease, with the Famagusta Initiative (Mağusa İnsiyatifi) calling on specialists and local authorities to step up.

Okan Dagli, a member of the Initiative which was officially formed in 2010, and which has since then advocated for the return of Varosha to its legal residents, the opening of the Famagusta port and the recognition of the Walled City of Famagusta as a Unesco Cultural Heritage Monument, told the Sunday Mail that Varosha’s flora is disease-stricken.

Rather than the fenced-off state of affairs creating a form of protective quarantine, the obstruction to access is allowing diseases to fester uncontrollably, especially among the prickly pear plants which is particular to Cyprus, and to spread to neighbouring areas including those in the southern part of Cyprus.

“The babutsa (papoutsosika/prickly pears) in Varosha are turning white and rotting from the inside, and they are all dying,” Dagli said.

Varosha’s prickly pears have been infected by an invasive pest species known as phenacoccus solenopsis (cotton mealybug), Dagli said, which forms white lumps on the fruit, quickly killing off the plant.

This mealybug species has the ability to increase rapidly in population size and spread to cover vast areas where host plants occur, in a relatively short period of time.

The disease has plagued neighbouring areas, including the Dhekelia bases, Dagli said, killing off the prickly pear plants which in many regions form an important source of livelihood.

According to Turkish Cypriot media, in January 2017, the Republic’s agricultural department director Androulla Georgiou, said that the pest had spread to the south, affecting plants of the cactus family and especially prickly pear trees in the Kokkinohoria (red villages), located near Varosha on the eastern coast of Cyprus.

In June-July last year, the Turkish army which controls Varosha opened the city to agricultural specialists and the municipality, so that the area can be examined, Dagli said.

“They identified the pest, but then began treating the plants with pesticides and insecticides, which are only effective for three to four months before the disease reappears,” Dagli said.

Rather, “the infected plants must be cut and burnt, there is no other solution if we want to stop the spread of the disease,” Dagli added.

The issue is not limited to Varosha’s flora, Dagli said, as there is a possibility that diseases are also festering in the derelict and decaying buildings which have been left to deteriorate for 44 years.

“We are in contact with the (Turkish Cypriot) chamber of agriculture in Nicosia, as well as with the architecture union, who are discussing with the stakeholders to see if both Greek Cypriot and Turkish Cypriot specialists can enter Varosha to examine all aspects that may pose threats,” Dagli said.

As such, the city of Varosha forms a central pillar in the Initiative’s actions and aspirations.

“Today, there is a decree on the Famagusta area to introduce an urban planning blueprint for the region spanning Trikomo to Famagusta,” Hamit said. “For us, this is of vital importance, because we want to protect the future of the development of the town economically but also ecologically.”

With Varosha continuing to remain a symbol of the seeming intractability of the island’s frozen conflict, Hamit stressed that “the most important goal is the reunification of our town and the reunification of Cyprus. We are not a political party, but we know that the political solution as a federation is a must.”