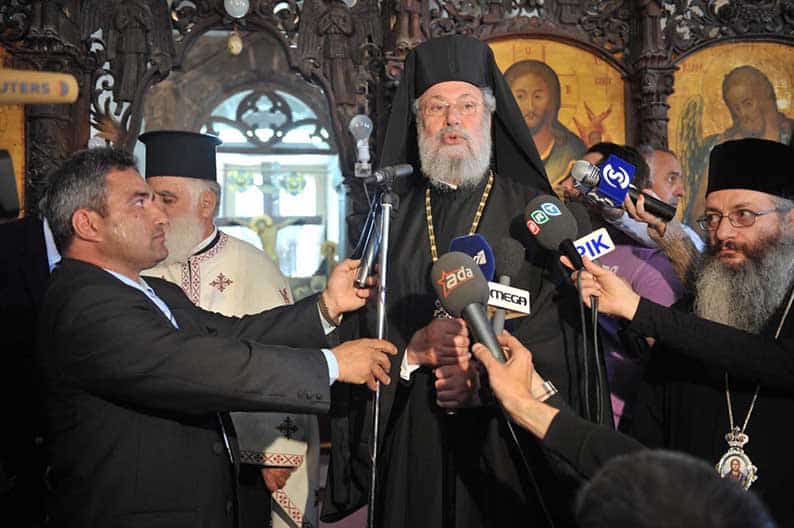 I have the impression that Cypriots are greatly discontented with their political, religious and economic establishments which confront the commoners as if they were like lambs to the slaughter. I hasten to point out that I have absolutely nothing against these charming animals, but it is a fact that they have come to symbolise mindless creatures that are pushed around according to the mood of their masters. Let me explain:

The economic establishment has clearly set the serving of its own short-term economic targets above any other goal and appears to remain unrepentant despite its monstrous mistakes that have led Cyprus to the brink of economic destruction. Have you heard a single member of the economic elite apologising for the harm inflicted on the people by their greediness or incompetence? I have not heard anything. To the contrary. All of them – with excessive arrogance – have sought (and mostly succeeded) in passing the blame on others, have claimed that what they have contributed to society exceeded what they have taken, or have quietly removed themselves from the scene of the crime.  It is fair to point out that the economic establishment does not include all the entrepreneurs, many of whom are decent and hard-working people with a substantial contribution to society.

Then comes the religious establishment, which for centuries has oppressed the people, resulting in the church becoming the largest land owner and one of the more important economic and political powers. It is no sheer coincidence that by law protocol provides that the archbishop is the second most important citizen of the Republic (after the president). The archbishop of Cyprus, who is “elected” through typically byzantine procedures, believes that he has a divine right to decide on behalf of the “herd” (the lambs referred to earlier) on all issues, including those which have no relevance to religion or the religious beliefs of the people. The archbishop formulates his positions guided by the Holy Spirit, without any other institutionalised or control procedures. The power claimed by the archbishop is systematically exercised from the pulpit or through other public statements, the substantive content of which is formulated through an obscure and unspecified process. The church’s involvement in the political scene is both visible and extensive.

A similar level of indifference to the judgement and the choices of the people is exhibited by the political establishment which, by rotation, calls the shots, in cooperation with the economic and the religious establishments. A standard practice followed by the political elite is to cover up or play down events deemed harmful to the image of the politicians.  This process is backed up by a systematic cultivation of impressions that lack the element of an objective assessment. The contradictions that inevitably emerge from these practices (as, for example, the fact that we have negotiated with Turkey over Cyprus for many years despite the strongly held belief that our neighbouring country is a totally unreliable prospective partner) are by-passed by the political elite as representing immaterial details.

Examples of policies formulated both on the national issue and in the economic sphere without any prior democratic dialogue are numerous. Starting with the Republic’s first president, I would highlight his refusal to apply the provisions of the constitution concerning local government and his decision to proceed with the unilateral amendment of fundamental provisions of the constitution, despite the explicit prohibition of such a step in the constitution itself. Indeed, it was these initiatives that provoked the first intercommunal friction and conflicts in the infancy of the Republic established in 1960.  President Makarios was the person who perceived and imposed the concept of “a long-term struggle”, which resulted in what had happened being treated as a fait accompli, gradually leading to the multiple impasses that confront us today.

Similar arbitrary behaviour characterised the tactics followed by Tassos Papadopoulos, the right-wing president who was elected with the support of left-wing Akel. In respect of the national issue, Papadopoulos attempted to mislead the European Union as well as the Turkish Cypriots, while he pioneered, in return for substantial personal benefits, the establishment of procedures that greatly assisted Serbia’s Slobodan Milosevic to prolong his political survival, thus angering major international economic powers. This activity formed the foundations of the economic crisis which some years later inflicted the Cyprus banking system. Who was consulted in respect of these choices?

Demetris Christofias, who followed Papadopoulos as president, would courageously declare that he was an unrepentant communist but he acted nonetheless in close collaboration with the economic establishment (as his appointments as finance minister clearly indicate). The culmination of these political choices was to place Cyprus on a “mechanical respirator”. It was at this stage that the political establishment naively proceeded on the basis that the acute economic problems confronting Cyprus in 2013 could be resolved overnight with “a thunderous no” on the part of the Greek Cypriot lawmakers.

The last player is the current president who was elected on an election platform that was exclusively focused on the reunification of Cyprus. Indeed, he was fighting to attain this goal, until he reached the point of “being called upon to cover the last mile”. At that stage, he made a covered U-turn. At no stage did he say that “for the following specific reasons, I consider it necessary to differentiate my position on the national issue” and seek the public’s approval for such an important diversion from the path on the basis of which he secured his election as well as his re-election. His rhetoric of “yes but” was established and followed with absolute consistency. The “buts” had various forms, starting with the absolute position of “no troops, no guarantees” and ending with “decentralisation” and “functionality”, concepts that to date remain vague and unspecified, despite his declared intention to explain and substantiate them.  Indeed, all these developments materialised at the time when the UN secretary-general had effectively adopted the Greek Cypriot demand to aim for a “normal” state and Turkey appeared willing to move in this direction.

From this point on, President Nicos Anastassiades and his close associates have consistently used ambiguous language when stating their position. Their statements are invariably followed by a “but”, in a manner that (seemingly) keeps everybody happy.  This practice has caused discontent because it is a form of prevarication. The president’s insistence on following an uncharted path leads to the conclusion that he claims the right to differentiate the policies followed on the national issue, without any obligation to unveil what he considers as necessary fundamental changes to the line previously followed according to the will of the people.

The fact is that the president has been elected to this position on the basis of an explicit understanding to respect and follow the country’s constitution, having formally affirmed his solemn “faith to, and respect for the constitution and the laws made there under, the preservation of the independence and the territorial integrity of the Republic of Cyprus” (article 42 of the constitution). It follows that any departure by the president from his obligation to be faithful to the constitution will inevitably give rise to serious legal repercussions, with consequences that are difficult to predict at this stage.

The responsibility burdening the shoulders of the economic, the religious and the political establishments of Cyprus for the current tragic state of the national problem is huge. These people are well advised to reassess the situation and to ensure that their calculations add up.

U.S. government shutdown breaks record, with no end in sight