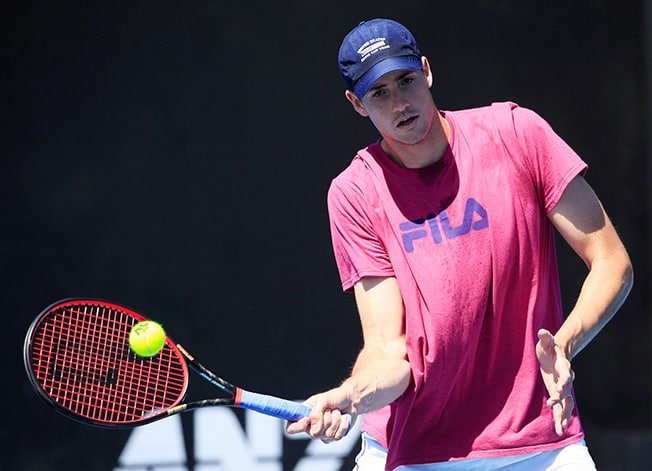 Jan 14 (Reuters) – Highlights of Monday’s opening day of the Australian Open, the first grand slam tournament of the year (all times GMT):

Tomas Berdych, back to full fitness following a back injury, defeated 13th seed Kyle Edmund 6-3 6-0 7-5 to move into the second round in style.

The Czech, a runner-up in the Qatar Open earlier this month, is participating in only his second tournament since the Queen’s Club championships last June but showed no signs of the problem as he dismantled Briton Edmund.

Grigor Dimitrov said having eight-times major champion Andre Agassi in his corner as coach had not just sharpened his game but also improved his outlook on life.

“I’m just a better person, period. On a daily basis, I have learned something new from him,” Dimitrov, who began working with the American great last October, said following his win over Janko Tipsarevic.

“Sometimes some of the things he says… it has nothing to do with tennis. And today before the match we are talking about completely different stuff.

“I was, like, ‘Oh, that feels nice.’ I think he also keeps me on point, keeps me on check. He’s just trying to remind you of the good things in life.”

Ninth seed John Isner was stunned by his American compatriot Reilly Opelka, who secured a 7-6(4) 7-6(6) 6-7(4) 7-6(5) victory in a tight encounter between the towering pair that looked set to go the distance.

Opelka, ranked 102 in the world, moved into the second round of a Grand Slam for the first time.

0531 OSTAPENKO DUMPED OUT BY SAKKARI

Jelena Ostapenko’s poor start to the season continued as the 2017 French Open champion was knocked out in the opening round at Melbourne by Greece’s Maria Sakkari.

Ostapenko, eliminated in the first round in her previous three tournaments, was beaten 6-1 3-6 6-2 by world number 41 Sakkari who scored her first career win over the Latvian to the delight of a noisy contingent of her compatriots.

Dimitrov, who struggled with an ankle injury towards the end of last season, hit 42 winners but also made 43 unforced errors during the victory.

Big-hitting American Sloane Stephens relied on accuracy instead of power, winning 69 percent of points on her first serve to ease past compatriot Taylor Townsend 6-4 6-2.

0404 NADAL TOO GOOD FOR DUCKWORTH

World number two Rafa Nadal swatted aside Australian wild card James Duckworth 6-4 6-3 7-5 in a performance that eased concerns over his fitness ahead of the season’s first major.

The 2009 winner had pulled out of the Brisbane International warmup with a thigh strain but showed no signs of the problem in his opener, beating Duckworth in two hours and 15 minutes.

He faces Matthew Ebden or Jan-Lennard Struff next.

Wimbledon runner-up Kevin Anderson fired 14 aces and 47 winners to blast past Frenchman Adrian Mannarino 6-3 5-7 6-2 6-1 and move into the second round.

The towering South African, who has never gone beyond the fourth round in Melbourne, next meets unseeded American Frances Tiafoe, who beat qualifier Prajnesh Gunneswaran 7-6(7) 6-3 6-3.

Britain’s Katie Boulter became the first player to win a deciding-set tiebreak at the Australian Open when she managed to hold off a resurgent Ekaterina Makarova and record a 6-0 4-6 7-6 (10-6) victory.

Boulter, who had also recorded the first ‘bagel’ of the tournament when she took the first set of their clash on Court 12, then struggled to put away the Russian.

Makarova, a former top-10 player, managed to clinch the second set 6-4 before Boulter overcame a break advantage in the third to force the tiebreak.

She then jumped out to a 5-0 lead in the first to 10 points and while Makarova got back to 7-6, Boulter sealed the match with an ace and forehand winner.

The Australian Open has joined Wimbledon this year in introducing a tiebreak when matches are tied at 6-6 in the deciding set. The first player to 10 points with a difference of two wins the contest.

Germany’s Julia Goerges became the first seeded player knocked out of the tournament when American Danielle Collins came from a set down to record a 2-6 7-6(5) 6-4 victory in the first match on Margaret Court Arena.

The 14th-seeded Goerges had come into the tournament in strong form having successfully defended her Auckland Classic title but looked uncomfortable against the power-hitting 25-year-old, who went for her shots during the second set.

The tactic paid off for Collins, who sealed the win in two hours, 25 minutes when her winner smacked into the net and the ball flopped into Goerges’ side of the court.

“The first set didn’t go my way but I had a clear mindset about what I needed to do,” said Collins, who was making her main draw debut at Melbourne Park.

“I decided today that I had to earn it the hard way, no easy jobs for me and I just out went there with no fear.”

0225 VERDASCO FIRST MAN THROUGH TO SECOND ROUND

Spain’s former top-10 player Fernando Verdasco became the first man through to the second round after he beat Serbian qualifier Miomir Kecmanovic.

The left-handed 26th seeded Verdasco took two hours, 11 minutes to beat the teenager 7-6(5) 6-3 6-3 and set up a second round clash against Moldova’s Radu Albot.

Former champion Maria Sharapova opened the quest for her second title at Melbourne Park with a 6-0 6-0 victory over British qualifier Harriet Dart.

The 22-year-old Briton saved two match points but blasted a backhand volley wide to give the Russian a rare ‘double bagel’ victory in 63 minutes.

0114 MARTIC FIRST INTO SECOND ROUND

Croatia’s Petra Martic wasted little time in the rising temperature to become the first player through to the second round after she demolished Britain’s Heather Watson 6-1 6-2 on Court 14.

Play got underway on schedule under sunny skies at 11 a.m. local time (0000) GMT with the temperature hovering just over the 25 degrees Celsius mark with a forecast high of 35C.