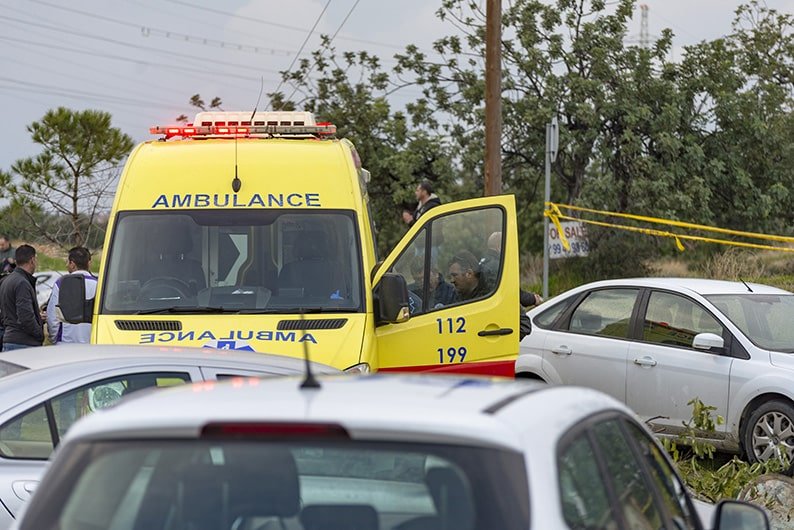 An ambulance at the scene of the killing on Monday (CNA)

Forty-four-year-old Christos Mihail was found dead in his car with bullet wounds to the chest on Monday afternoon in Ayios Silas in Limassol. Police are investigating premeditated murder.

Mihail’s body was found at around 3pm in the driver seat of his car in a field near the Limassol general hospital by a resident of the area who had alerted the police. The resident investigated the vehicle after noticing that the car had been parked in the same location for several hours. The 44-year-old, who is from Limassol, was reportedly a father of two.

It is believed Mihail was shot early on Monday. Reports said that he was shot in the chest with a hunting rifle through his car window.

According to state broadcaster CyBC, police located broken plastic parts of the car elsewhere in the field. It is speculated that he had most probably met his killer or killers on the top of a nearby hill, in Kale Vounari, and after he was shot tried to escape, but his vehicle veered off course and went downhill before being stopped by a large wooden chicken coop in the field.

A resident told CyBC that he had heard gun shots at around 2.10am on Monday.

Reports claim that the suspected premeditated murder is drug-related and that the 44-year-old had prior dealings with the police. He was arrested in 2017 for the possession of some 350 grammes of cocaine.

Police cordoned off a large part of the surrounding area and started searching for evidence in torrential rain.

They have released few details about the killing.

“The scene has been cordoned off while investigations are being carried out in the wider area,” Angelides said.

He said that it was still very early for the police to determine the circumstances around the incident, but police later confirmed they suspect premeditated murder.

“A team of investigators has been appointed who have already started taking testimonies from a number of persons,” he said.

Police expect to find clues in the crime scene that would help shed light on the incident.

“A crime scene gives answers to many questions,” Angelides said, expressing certainty that investigations at the scene would start revealing information concerning the incident.

State pathologists Nicolas Charalambous and Angeliki Papetta were called to the scene to examine the body.

Mihail was arrested in Limassol in August 2017 after police had to fire warning shots when he tried to flee and after 350 gr of cocaine and around €1,000 in cash were found on him.

Acting on a tip-off, the drug squad had placed the then 43-year-old’s car under surveillance and when he was called to stop for a police inspection in the Linopetra, Limassol, area, he tried to speed away, hitting two police cars in the process.

Following warning shots and shots at his car tyres, police were able to arrest him when they discovered the cocaine and cash.

Meetings herald ‘a new beginning’ for teachers and minister