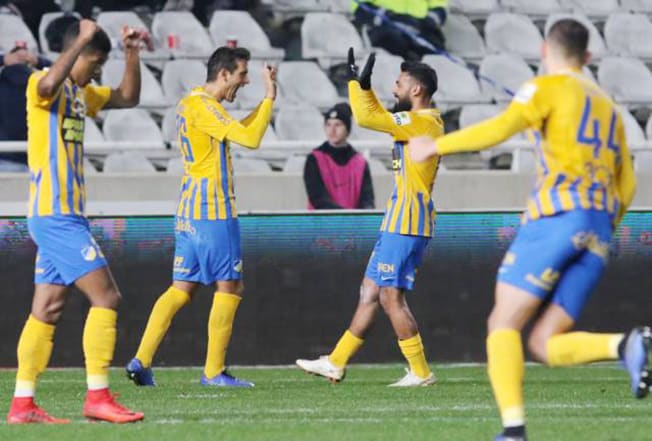 Leaders Apoel continued their impressive winning run with a 4-0 rout of Anorthosis while third-placed Apollon had to come from behind to defeat gutsy Omonia.

AEK disappointed yet again as they could only manage a 2-2 draw against bottom club Ermis Aradippou, something that cost Antoni Iraoloa his job.

The 4-0 scoreline flattered Apoel as they were second best to Anorthosis for the first hour of the game and scored two goals against the run of play.

Leo Natel gave Apoel the lead in the 17th minute with a fierce strike from outside the area while Nuno Morais converted a 66th minute penalty after Apoel’s rampaging wingback Nsue was upended in the penalty area.

Anorthosis did everything but score. They controlled play from the first whistle and had 67% possession in the first 45 minutes. They missed a host of chances, both before and after Natel’s strike with Michal Duric the main culprit. They also had two penalty shouts turned down.

Even in the early stages of the second half Anorthosis could have equalised but Beka Mikeltadze’s shot came off the post with Waterman well beaten.

Apoel’s third goal, 20 minutes from the end by defender Ioannou, killed the game as Anorthosis realised that this would not be their day. The icing on the cake came in in added time as Lucas Souza scored a fourth for the champions.

Apollon had to dig deep against Omonia but in the end they richly deserved the win against a battling but rather limited team.

Jonnys had given Omonia the lead in the 23rd minute in a well-balanced first half.

Apollon stormed back after the restart with fast-flowing attacking football and managed to equalise through Kevin Bru in the 56th minute and took the lead 15 minutes later through Zelaya.

The Limassol side had a number of chances to make sure of the points well before the final whistle but their strikers were wasteful in front of goal.

AEK continued their disappointing league form as they failed to beat Ermis at the Arena stadium resulting in the sacking of their coach Iraola.
The last team AEK beat was Apoel back in November and since then they have gone eight league games without a win, drawing four and losing four.

Even though they took the lead against Ermis through Hefel they found themselves trailing at the break with two goals from Ermis defender Taralides.

Florian Taulemmeuse salvaged a point for AEK with a 76th minute penalty.

Nea Salamina returned to winning ways with an emphatic 3-1 over Pafos FC, moving into fourth place and pushing Pafos FC dangerously towards the relegation zone.

From the moment Nea Salamina took the lead on the half hour through Mintikkis they never looked like relinquishing it. Further goals by Kinglsey and Noor made sure of the points with Pafos FC pulling one back late on in the game through Angulo.

A goal in the opening five minutes by Carlao was enough to give Doxa Katokopias the three points against Enosis who remain in the relegation zone.

In the final game of the round on Monday night, AEL beat Alki 3-1 in Oroklini as they moved up to second in the table, just one point behind Apoel.