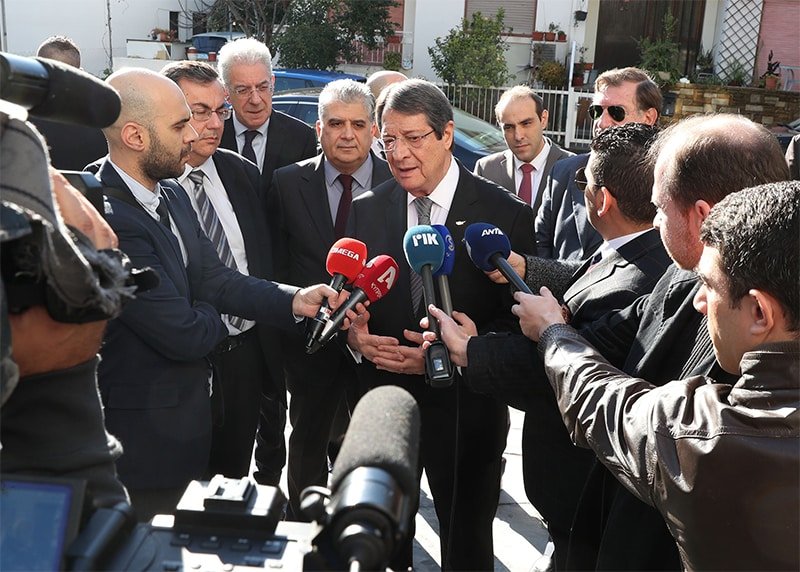 President Nicos Anastasiades on Monday said he would wait for UN special envoy Jane Holl Lute’s return to Cyprus to see how to handle Turkey’s request to halt all efforts to resume the dialogue on the Cyprus issue due to Turkish local elections in March.

“This is proof to all those who criticised me that I did not do everything possible to resume the dialogue,” Anastasiades said, commenting on reports that Ankara was seeking to freeze all efforts to find a way out of the current stalemate until after the local elections in Turkey.

“We have made our intentions clear, submitted all documents we were asked for, therefore what we are waiting for now is Ms Lute’s return to see how we handle the issue.”

Anastasiades also said that he was satisfied by the latest report of the UN secretary-general recommending the renewal of Unficyp’s mandate for another six months until July 31.

Antonio Guterres, in his report that circulated to the UN Security Council late last Friday in New York reaffirms the importance of Unficyp to peacekeeping in Cyprus, but highlights several areas of concern as far as confidence-building was concerned.

But Turkish Cypriot leader, Mustafa Akinci, remains unconvinced of Anastasiades’ stated efforts for a relaunch of the talks.

To prove his point, Akinci, quoted on Sunday the late Glafcos Clerides, saying that he had pointed out in his book, ‘I katathesi mou’ (My Deposition) the problem of mentality within the Greek Cypriot community in terms of solving the Cyprus problem.

In his address on Sunday at the seventh memorial of former Turkish Cypriot leader, the late Rauf Denktash, Akinci said, quoting Clerides, that “the aim of the Greek Cypriots was to transform Cyprus into a Greek Cypriot state and to ensure that Turkish Cypriots remained a minority.

“The main concern of Turkish Cypriots was to stave off these efforts and to preserve the concept of partnership between the two communities as stipulated in the Zurich agreements.”

Clerides, Akinci said, had also pointed out “that by accepting federation as a basis of settlement, the non-solution continued today. However, the federation is nothing more than a constitutional partnership of the constituent states.”

These views, Akinci said, were expressed 30 years ago.

“We are in 2019,” Akinci said, adding that Anastasiades’ recent statements prove that Clerides’ observations are still very valid.

Akinci said that the resistance to the political equality of Turkish Cypriots shows that the Greek Cypriot side “is still unfortunately at the same point”.

The inability to accept that Turkish Cypriots are one of the two equal societies points to a serious mentality problem, Akinci said.

Anastasiades repitched last November the idea of a  decentralised federation as a model for reuniting the island, and as a way out of the deadlock concerning one of the most difficult issues, the effective participation of Turkish Cypriots.

While Turkey and some Turkish Cypriot political parties appear willing to discuss other types of solution other than that of the bizonal bicommunal federation, Akinci had said he would rather resign than table any model of a solution other than a federal system.

Strike to go ahead at Limassol port on Wednesday