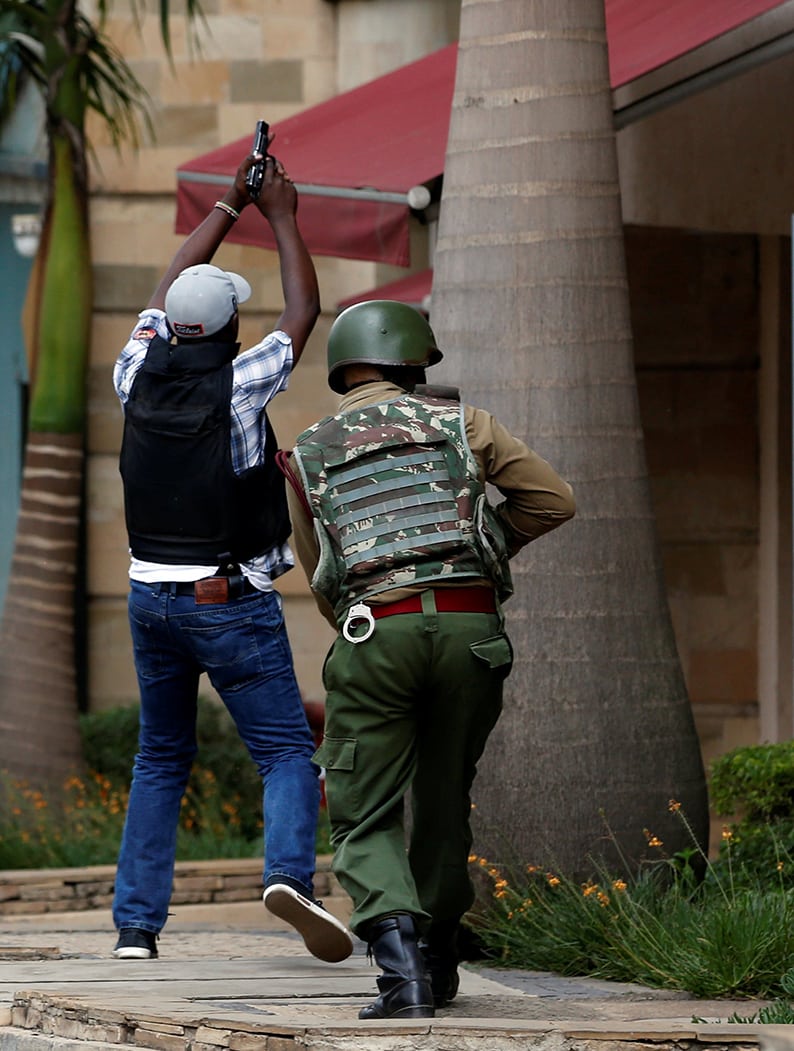 Members of security forces are seen at the scene where explosions and gunshots were heard at the Dusit hotel compound, in Nairobi, Kenya January 15, 2019

By George Obulutsa and Baz Ratner

NAIROBI, Jan 15 (Reuters) – Gunmen blasted their way into a hotel and office complex in the Kenyan capital on Tuesday, killing at least 15 people and sending workers diving under desks to escape an attack claimed by Somalia-based Islamist group al Shabaab.

More than 12 hours after the assault began at Nairobi’s upscale 14 Riverside Drive complex, bursts of gunfire and blasts were heard in the area, undermining government assurances everything was under control.

The shots rang out at around 3:30 a.m. local time (0030 GMT) as a group of around 150 workers was escorted from a building where they had sought refuge. Many more remained inside and some needed first aid for gunshot wounds, a first responder told Reuters.

By 1 a.m. local time, 15 bodies had arrived at Chiromo Mortuary and more were expected, an attendant told Reuters.

Identification papers indicated that 11 were Kenyan, one was American and one was British, he said. The other two were not carrying documents.

A U.S. State Department official confirmed one of the victims was American.

“We can confirm that a U.S. citizen was killed in the attack,” the official said without giving further details.

Kenya’s Interior Minister Fred Matiang’i had said at 11 p.m. that all buildings at the scene had been secured and scores of people evacuated. But he did not comment on the attackers’ whereabouts and said security forces were still “mopping up”.

Nairobi is a major hub for expatriates and the compound targeted contained offices of various international companies, in an echo of a deadly 2013 assault on a Nairobi shopping centre in the same neighbourhood.

“The main door of the hotel was blown open and there was a human arm in the street severed from the shoulder,” said Serge Medic, the Swiss owner of a security company who ran to the scene to help when he heard of the attack from his taxi driver.

Medic, who was armed, entered the building with a policeman and two soldiers, he said, but they came under fire and retreated. An unexploded grenade lay in the lobby, he said.

“One man said he saw two armed men with scarves on their head and bandoliers of bullets,” Medic told Reuters, as gunfire echoed in the background.

Kenya has often been targeted by al Shabaab, who killed 67 people at the Westgate shopping centre in 2013 and nearly 150 students at Garissa University in 2015. Al Shabaab says its attacks are revenge for Kenyan troops stationed inside Somalia, which has been riven by civil war since 1991.

Earlier in the day, office workers had streamed from the complex, some jumping from windows. Security forces continued to escort small groups to safety into the evening, with some hustled into armoured vehicles amid sporadic gunfire.

Foreign security advisers at the site scrambled to make sure their clients were safe.

Kenyan police chief Joseph Boinnet said the attack began around 3 p.m. with an explosion targeting cars outside a bank followed by a detonation from a suicide bomber in the hotel lobby. As he spoke, a Reuters reporter on the scene reported heavy gunfire, then an explosion shortly afterwards.

Surveillance video showed three attackers dressed in black running across the parking lot at 3:30 p.m. shortly followed by a fourth. At least two of the men were wearing green scarves in the close-up footage. One appeared to be wearing a green belt with grenades on it.

Two Kenyans in their early 30s working with governance consultants Adam Smith International were among the dead, a family member said. Both had young families, she said.

A Spanish national was among the injured, a Spanish diplomat told Reuters.

A woman shot in the leg was carried out of the complex, and several men emerged covered in blood. Some office workers climbed out of windows. Many told Reuters they had to leave colleagues behind, still huddled under their desks.

“There’s a grenade in the bathroom,” one officer yelled as police rushed out from one building.

Geoffrey Otieno, who works at a beauty salon in the complex, said he heard a loud bang from something thrown inside the building, then saw shattered glass.

“We hid until we were rescued,” he said.

Meanwhile, Simon Crump, an Australian who works for an international firm in the complex, barricaded himself inside a spare room with two other people. They waited there for about 2-1/2 hours for help to arrive, their minds racing.

“You’re hiding under a desk trying to figure out what’s going on, and you just don’t know, as there’s so much misinformation,” he said.

When soldiers finally reached the group, they instructed them to put their phones away and put their hands in the air as they made their way to safety.

“We are behind the attack in Nairobi. The operation is going on,” Abdiasis Abu Musab, the group’s military operations spokesman, told Reuters by telephone in Somalia.

According to its website, 14 Riverside is home to local offices of international companies including Colgate Palmolive , Reckitt Benckiser, Pernod Ricard, Dow Chemical and SAP, as well as the dusitD2 hotel, part of Thai group Dusit Thani.

Kenya is a base for hundreds of diplomats, aid workers, businessmen and others operating around East Africa.

The Australian Embassy is across the road from the compound.

“I just started hearing gunshots, and then started seeing people running away raising their hands up and some were entering the bank to hide for their lives,” a woman working in a bank in the complex said, adding she heard two explosions.

Kenyan troops, concentrated in southern Somalia, originally entered the country to try to create a buffer zone along the shared border. They now form part of an African Union peacekeeping force.

The attack took place as a Kenyan court prepares to sentence four men accused of aiding the Westgate mall attack.