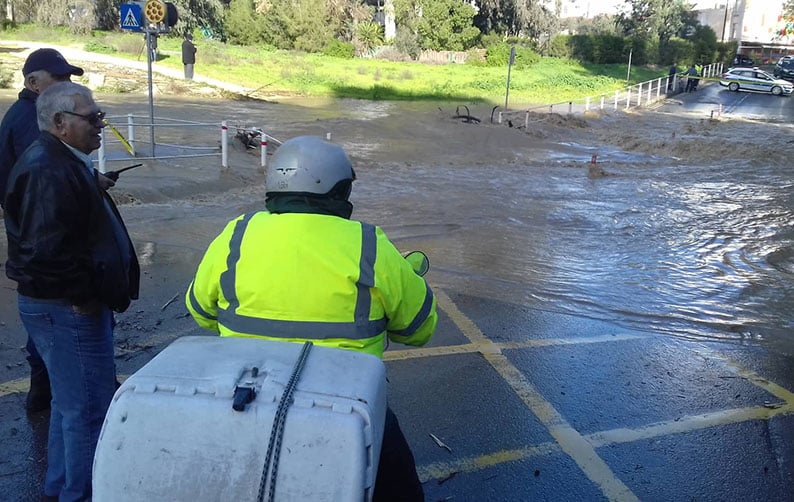 Some schools remained closed on Wednesday as crews worked to repair power lines affected by the weather overnight.

The fire service reported over 80 calls for assistance across the island, including fallen trees and flooded dwellings. No serious injuries have been reported so far.

Most incidents were reported in Limassol, which was buffeted by strong winds overnight. Fire service spokesman Andreas Kettis said crews responded to 37 calls, 13 concerning fallen trees on public roads. In some cases, the trees landed on cars causing damage but no injuries.

Seventeen other incidents concerned flooded dwellings while six drivers stranded in flooded roads had to be rescued, Kettis said.

Electricity company (EAC) crews were working throughout the night to restore power to areas affected by cuts as a result of the weather.

In Limassol, EAC said there were 10 cases, including two where the electricity poles ended up in ravines during rock slides. A transformer was also removed by the wind and thrown in a ravine.

EAC spokeswoman Christina Papadopoulou asked the public to be patient as crews were working under difficult conditions to restore service.

The Limassol district administration had 30 crews out on Wednesday cleaning roads from fallen trees, rocks, and mud.

Municipal crews were also out trying to restore the damage.

The education ministry said schools in Agros, Lemithou, and Kampos will remain closed on Wednesday because of the weather conditions.

Paphos was also hit hard by the weather, which caused road closures in many areas.

The forestry department warned that the Avacas Gorge was extremely dangerous due to soil erosion and will remain closed to visitors.

Larnaca and Famagusta were also affected but to a lesser extent.

The fire service was received five calls to remove trees and other objects from public roads in Larnaca and six in Famagusta. In Kofinou there were six calls, including a flooded dwelling.

Early on Wednesday, there was a power cut in Aradippou and Kiti.

In Nicosia, authorities closed two bridges on Alexandroupoleos Street in Strovolos and in the Ayios Spiridonas area of Deftera after the Pedieos river overflowed.

In the Pera Chorio – Dhali area, Eleftheria road, Evripidou road, Leontiou Macheras road, Theodorou Kolokotroni road in Dali, the Kosiati – Ayia Varvara road and the road in the industrial area of Dhali – Potamia are not accessible.

The exit from the Evrychou road to Kakopetria is closed due to landslides and drivers are asked to use the roads from Galata or Ayios Nicoalou to enter Kakopetria.

Isolated rains and storms are expected to continue on Wednesday with strong northwestern to northern winds.

Temperatures are forecast to reach 12C inland and in coastal areas and 2C in the mountains.

Warmer weather is expected to start from Thursday.

Many other roads are also closed as follows:

Ayios Giorgios Peyia in the direction of Akamas

The main road in Akaki

Away with the fairies (the full meze)