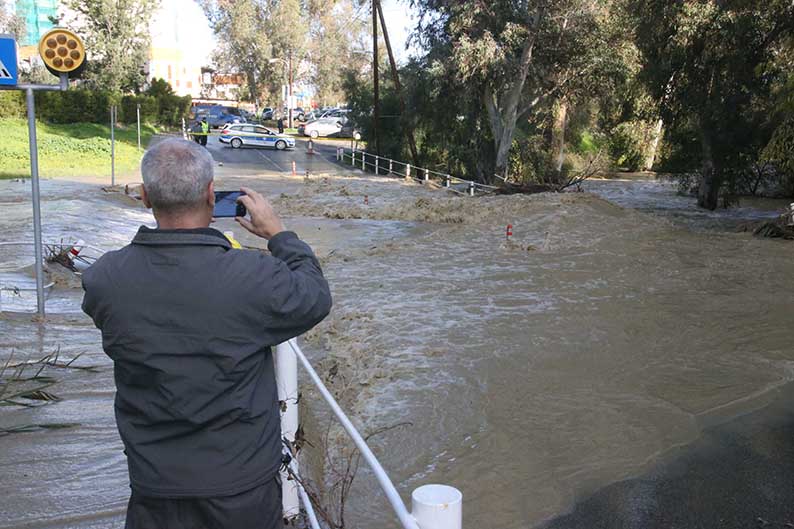 Torrential rain across the island on Tuesday and Wednesday has caused short-term havoc but is filling the reservoirs with much needed water.

By Wednesday night, the reservoirs reached record levels for Cyprus, as they stood at 40.5 per cent full, compared with a little over 31 per cent on Tuesday morning.

“We expect them to soon reach 50 per cent,” Phaedros Roussos from the water development department said. “The last time we had so much rain in a day was 30 years ago, in 1989.”

Four reservoirs overflowed in Paphos, in addition to the Klirou reservoir in Nicosia.

Later on Wednesday, the Arminou reservoir with a capacity of 4.3 million cubic metres of water overflowed, with the village’s mayor Andreas Petrou noting that the reservoir has not overflowed since 2012.

In the coming days, the Ayia Marina Chrysochous reservoir, as well as the massive Germasogeia reservoir in Limassol which can hold 13.5 million cubic metres of water, are expected to overflow.

Despite the influx of water into Cyprus’ reservoirs, the Nicosia and Larnaca water boards warned of possible water cuts after heavy sea storms damaged their desalination plants leaving them out of order and with very low stocks of desalinated water.

Despite the good news about the reservoirs, the heavy rain came with a price, causing power cuts, overflowing rivers, flooded dwellings, and other damage to property.

Roads turned into rivers across the island. The Pedieos river in Nicosia overflowed, causing a number of roads to close at various heights of the river.

The Xeros and Dhiarizos rivers also overflowed in Paphos, damaging dozens of roads and properties.

Heavy rain and hail were severely restricting visibility on the Limassol to Paphos motorway on Wednesday afternoon.

The fire service reported over 80 calls for assistance across the island during the night and more than 20 during the day, including fallen trees and flooded dwellings. No serious injuries were reported.

Most incidents were reported in Limassol, which was buffeted by strong winds overnight. Fire service spokesman Andreas Kettis said crews responded to 37 calls, 13 concerning fallen trees on public roads. In some cases, the trees landed on cars causing damage but no injuries.

Seventeen other incidents concerned flooded dwellings while six drivers stranded in flooded roads had to be rescued, Kettis said.

Electricity company (EAC) crews were working throughout the night to restore power to areas affected by cuts as a result of the weather.

In Limassol, EAC said there were 10 cases, including two where the electricity poles ended up in ravines during rock slides. A transformer was also removed by the wind and thrown in a ravine.

EAC spokeswoman Christina Papadopoulou asked the public to be patient as crews were working under difficult conditions to restore service.

The Limassol district administration had 30 crews out on Wednesday cleaning roads from fallen trees, rocks, and mud. Municipal crews were also out trying to restore the damage.

Schools in Agros, Lemithou, and Kampos remained closed on Wednesday because of the weather conditions.

All roads leading to Troodos, from Karvounas, Platres and Prodromos and many others in the other districts were closed.

Larnaca and Famagusta were also affected but to a lesser extent.

Early on Wednesday, there was a power cut in Aradippou and Kiti.

Police have warned drivers to heed the warning sign and urged them not to try to drive through rivers as in many places the water is higher than one metre.

On Thursday and Friday, the weather will be mostly clear. Temperatures will gradually rise.

On Saturday, some snow might fall on the higher peaks of Troodos.

US govt shutdown enters its 26th day as talks paralysed