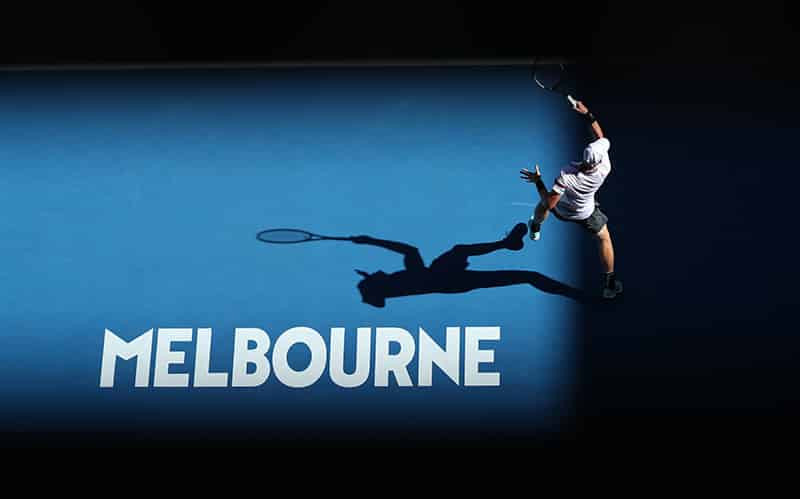 The American, who stunned fifth seed Kevin Anderson in the previous round, takes on Grigor Dimitrov next.

Kyrgios is better on court than behind mike, says Federer

Grigor Dimitrov endured a stern test early in his third round match against Italian Thomas Fabbiano before the 20th seed prevailed 7-6(5) 6-4 6-4 in a little over two hours.

Denmark’s Wozniacki raced to a 4-1 lead in the opening set but Sharapova raised her level and reeled off the next five games to grab the early advantage in the contest.

The second set followed a similar pattern before Wozniacki took advantage of Sharapova’s sloppy serving late on to drag the match into a decider.

The Russian was not to be denied in the third set, however, as she closed out the win on her second match point in two hours and 24 minutes.

American Sloane Stephens, seeded fifth, beat Croatia’s Petra Martic 7-6(6) 7-6(5) to move into the fourth round where she meets Anastasia Pavlyuchenkova.

Former U.S. Open champion Stephens has won both previous meetings with the unseeded Russian, including a three-set victory at Beijing last year.

The unseeded 17-year-old, who reached the quarter-finals at Auckland earlier this month, prevailed in 65 minutes to set up a fourth-round clash with Petra Kvitova or Belinda Bencic.

0344 FEDERER TOO GOOD FOR UNSEEDED FRITZ

Tomas Berdych dropped the opening set but recovered to overcome Diego Schwartzman 5-7 6-3 7-5 6-4. The Czech missed the last six months of 2018 due to a back issue but has since returned to form, reaching the final of the Qatar Open earlier this month.

Stefanos Tsitsipas beat Nikoloz Basilashvili 6-3 3-6 7-6(7) 6-4 to reach the last 16 at Melbourne for the first time and equal his best Grand Slam result.

The temperature at Melbourne Park was hovering around the 25 degrees Celsius mark on a cloudy day.

BoC: nothing unusual in supreme-court link to out-of-court settlement

Liverpool must be mindful of Palace peril in Anfield clash