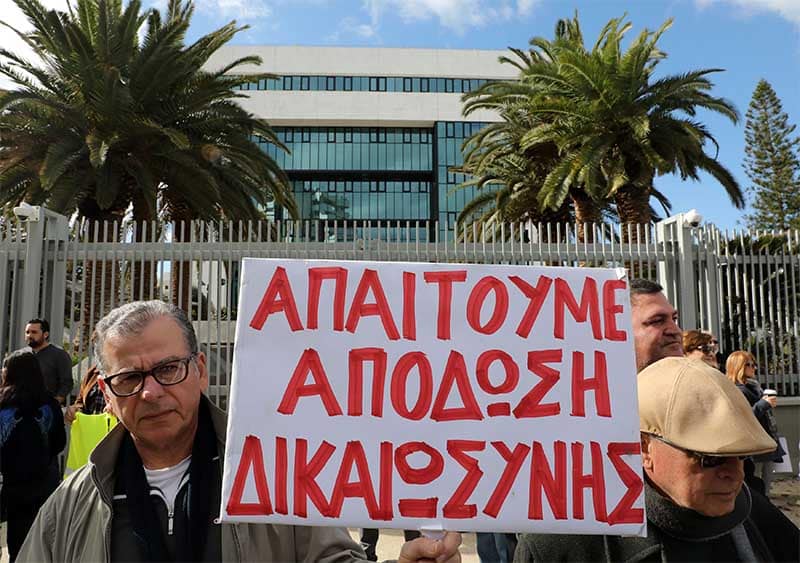 Bank bondholders protested the loss of their assets during the banking on Friday morning following what they perceived to be the preferential treatment shown to the President of the supreme court Myron Nicolatos whose sister and daughter got out-of-court settlements with Bank of Cyprus.

The bondholders assembled at the BoC HQ first, which is adjacent to the central bank, before taking their protest outside the supreme court.

They held signs that said ‘They stole from us, they destroyed us’ and ‘The Bank of Cyprus is guilty’.

“In this country, we have abolished everything,” demonstrators said in a statement, adding that some government institutions, unfortunately, instead of correcting wrongdoings they seemed to allow and encourage improprieties.

The association called on the government to protect its citizens.

“We are focusing on the thieves of halloumi and leaving the thieves of billions at large, and in the worst cases the state did not even try to find out who is guilty and bring them to justice,” bondholders said.

They also said those who were guilty were not found and punished. No investigation was carried out and what was left of Laiki’s assets were destroyed.

Laiki Bank, the island’s second largest, was shuttered in 2013 as part of the island’s bailout. BoC seized 47 per cent of customer deposits over €100,000 to recapitalise.

“Six years later, we are still looking for ways not to repay the ones we robbed but to throw them bones to keep them quiet,” the statement said.

Recently, the statement added, the last stronghold of democracy, that of justice, seems about to collapse in a reference to nepotism allegations against supreme court judges.

Laiki depositors and bank bondholders whose investments were wiped out in the 2013 bail-in have since asked for compensation.

The March 2013 events saw the loss of €7.7bn in deposits (amounts over €100,000). In addition, anywhere from €1.2bn to €1.5bn in contingent securities were converted into equity (bank shares) of practically zero worth.

Ex-mistress of ‘El Chapo’ was ‘traumatised’ by tunnel escape