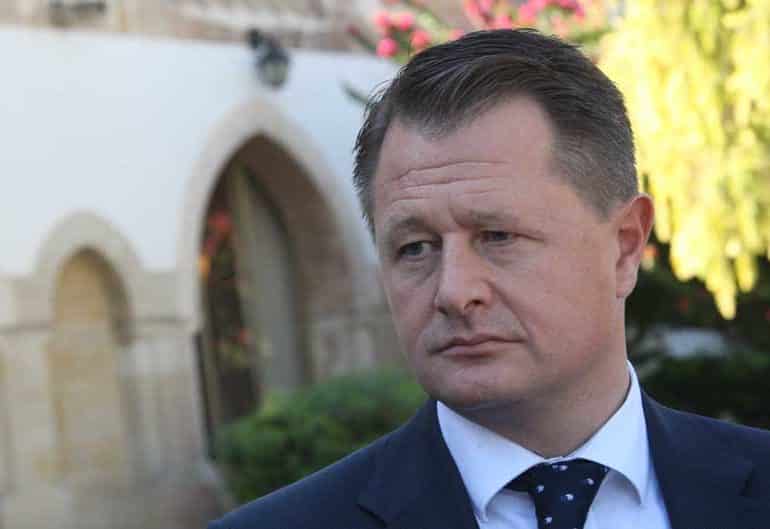 John Hourican: It's ‘upsetting and annoying’ that a personal dispute between two high-office holders is being played out ‘in the football pitch of the Bank of Cyprus’

John Hourican, the Bank of Cyprus’ CEO, said on Saturday he was outraged over allegations the bank has given preferential treatment to individuals with high-level positions in society, following the recent dispute over the president of the supreme court Myron Nicolatos, whose sister and daughter got out-of-court settlements with Bank of Cyprus.

“I would refute and I am outraged at the idea that people would suggest that this is the case,” Hourican said in an interview with the Cyprus News Agency.

Critics of Nicolatos have focused on the fact that his daughter and sister appeared to have benefited from out-of-court settlements with Bank of Cyprus (BoC) relating to lawsuits they had filed concerning the conversion of their deposits into bonds in the aftermath of the 2013 economic crisis.

Nicolatos had adjudicated in an appeal filed by former BoC CEO Andreas Eliades who had been jailed for market manipulation.

In a 2 to 1 decision, the three-bench supreme court found that Bank of Cyprus and Eliades, although they had made false representations about the financial status of the bank in the years leading up to the crisis, did not do so with intent to manipulate the market but rather to ‘reassure’ shareholders.

The supreme court decision was criticised by attorney-general Costas Clerides and the Securities and Exchange Commission.

In statements earlier this week, Clerides directly pointed the finger at Nicolatos, saying it was his vote that swung the decision in Eliades’ and the BoC’s favour when there was a conflict of interest because his daughter and sister had benefited from an out-of-court settlement in a separate lawsuit they had filed against the bank, relating to claims they made concerning the conversion of their deposits into bonds.

The bond issue is just one aspect of the astonishing claims first made by lawyer Nicos Clerides, brother of the attorney-general, which sparked the fracas.

Nicos Clerides claimed, and later provided details, that the courts are controlled by the Polyviou and Chrysafinis law firm which represents the bank.

“There is not a single supreme court judge who does not have a child at the law office that promotes the banks’ interests,” he said.

On Saturday, Hourican added it is ‘upsetting and annoying’ that a personal dispute between two high-office holders was being played out ‘in the football pitch of the Bank of Cyprus.’

“This is not appropriate, not correct, and is damaging to the country’s reputation.”

Following the crisis, he added that the country and the banks have spent five years trying to re-establish confidence in the banking sector, and that it was ‘wrong’ for people with personal disputes to ‘air them in this manner’.

“We are absolutely not giving preferential treatment to individuals or relations to high members of Cyprus’ society.”

Asked if the bank was giving off an image of support to the BoC’s former CEO Eliades, Hourican said that he did not know him nor had he met him, and that he was managing the consequences of how the bank was managed throughout the years.

“We have to separate the management of a bank from the legality of issues pertaining to people, who were officers or not, of the bank.”

He added that it was not his job to deal with these issues, and that it was the job of the courts to decide on legal matters.

The bank is owned by its depositors, he said, adding that his job was to protect the bank.

“I must remind everyone that the bank went effectively bust, and was recapitalised by its depositors,” Hourican said.

His focus, the BoC CEO added, was to fix the bank not to protect any of the prior management, as it was in the ‘hands of the law’ to deal with that.

On Friday, bank bondholders protested the loss of their assets outside the BoC HQ in Nicosia, following the allegations of preferential treatment given to Nicolatos’ family.

The private holders of convertible enhanced capital securities issued by the Bank of Cyprus and now-defunct Laiki Bank claim they were mis-sold financial products, which were essentially wiped out following the March 2013 events, and have long demanded to be compensated.

In his response on Saturday, Hourican said that he has ‘huge empathy’ for the situation the bondholders found themselves in, but that he must deal in the ‘inconvenience of the truth and the facts’.

Hourican said the bank has run a scheme so that the affected bondholders could find some degree of settlement and many of the cases have been settled.

“We are speaking to individuals on a one by one basis, to see whether the facts support that we did something wrong,” he said.

Any settlement that the bank reaches, Hourican said, must come from the owners of the bank, who are the depositors.

Regarding the bonds and a settlement, Hourican said that there could not be a generalised settlement.

“We have to recover the money of our depositors, before we go up through the capital structure,” he said.

The bank has no capacity to put everyone back whole, he said, adding that the bank needs to be strengthened in order to create value in the equity.

“If the bank has done something wrong in its sales practices, then we will remedy that,” Hourican said, adding that the cases must be examined individually.

Hourican added that the issues do damage the bank’s reputation, and that they have worked hard over the past five years to restore confidence.

“The business of running a country is a serious business. And I would encourage all of those who have a responsibility or a part in running the country… to take this very seriously and resolve it properly.”

Many rural roads closed due to overflowing rivers