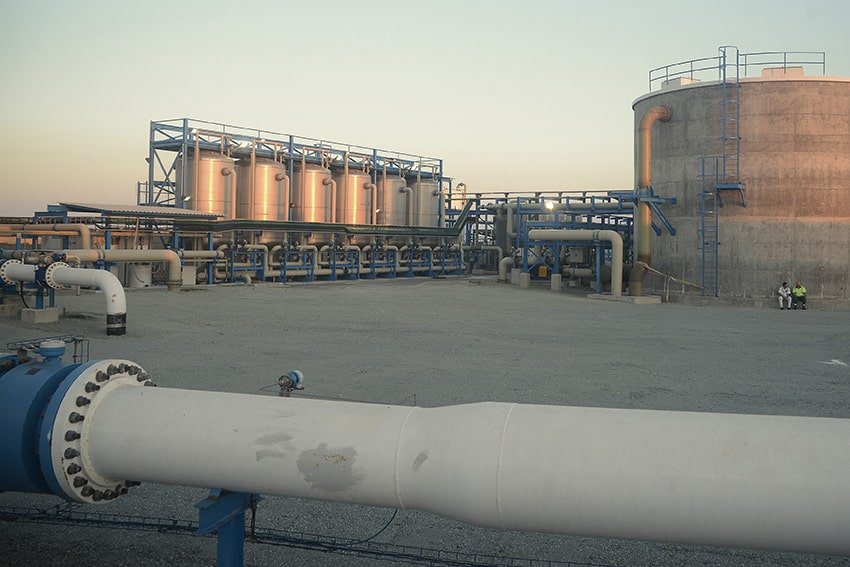 It’s been the rainiest January in 30 years with water pouring into the island’s reservoirs, yet rather than this being an opportunity to decrease dependence on costly and environmentally unsustainable desalination plants, by Friday we were raising their operation to full capacity.

As the torrential rainfall that marked the first half of the week caused a number of island’s reservoirs to overflow, it also brought about violent seas which led to the obstruction of the desalination plant systems, resulting in water cuts on Thursday and Friday by the Larnaca and Nicosia water boards.

The director of the Larnaca desalination plant, Dr Eirineios Koutsakos, told state broadcaster Cybc on Thursday that the seawater was stirred to such an extent that it became mixed with large quantities of seaweed, sand and mud, resulting in the filters of the desalination plant not being able to cope with such a packed seawater composition to produce enough desalinated water. The water produced was rather used to wash out the filters.

According to the deputy director of the Water Development Department (WDD), Panayiota Hadjigeorgiou, “normally, we rely on water produced by the island’s four desalination plants for 82 per cent of the needs of Nicosia, Larnaca, Limassol and Famagusta, which float around 122 million cubic metres of water per year.”

The 2008 drought led to the building of four desalination plants which, working at maximum capacity, can produce a total of 220,000 cubic metres of water daily, covering the supply needs of Nicosia, Limassol, Larnaca and Famagusta.

In view of Paphos’ almost complete dependence on water from the Asprokremmos dam and water treatment plant, a fifth desalination plant is expected to be completed in Kouklia by the summer of 2020, with a total production capacity of 15,000 cubic metres per day.

However, desalination plants produce water only when necessary. Otherwise, they remain closed and the government pays them “stand-by rate”.

It appears that with the obstruction of the filters at the Larnaca desalination plant, extreme and sudden water shortages made it necessary to put all hands on deck and blast water desalination to full capacity.

To cover the water needs of Nicosia, Larnaca, Famagusta and Limassol, three desalination plants, in Dhekelia, Larnaca, and Vasilikos, were working at full capacity by Friday, producing 60,000 cubic metres of water per day. The fourth in Episkopi will produce at full capacity a further 40,000 cubic metres of water per day on Monday, Hadjigeorgiou said.

“It’s usually not in operation. Water is only produced in Vasilikos when it is required by the WDD, which requested that it is put to operate to full capacity on Friday due to the decreased production of desalinated water by other plants,” she said.

According to Phaedros Roussos from the WDD, by January 17, reservoirs island-wide were on average 47 per cent full, containing stocks amounting to a total of 133.7million cubic metres of water, which are expected to continue rising daily.

It is in this water-brimming period that we are placing desalination plants, a tool built to fight against drought, to produce at full capacity.

According to the vice president of the Greens Party, Efi Xanthou, the problem is not the process of desalination itself, but the unplanned, environmentally unsustainable, and unmonitored way it is done in Cyprus.

“The process of desalination also creates by-products which are then dumped back into the ocean, damaging marine life, changing the sea environment, among a number of other problems,” Xanthou said.

Desalination plants have very high production costs and also emit carbon dioxide which undermines Cyprus’ commitments to reduce carbon emissions, and threaten marine environments, especially when they are all operating at the same time, and even more so when operating to full capacity.

According to a UN-backed study on January 14, almost 16,000 desalination plants worldwide produce bigger-than-expected flows of highly salty waste water and toxic chemicals that are damaging the environment.

Experts also claim that removing salt from large volumes of salt requires large quantities of energy. Emissions created by desalination plants contribute to climate change, a leading factor of the droughts and water shortages the process is intended to mitigate.

“I recognise that with climate change, we’ll be getting more extreme weather conditions, so while we’ve had an abundance of rain this winter, we’ll soon be rationing water due to severe droughts in the summer,” Xanthou said.

Some progress has been made in terms of water recycling, as the latest figures by the WDD show that in 2016, sewerage water recycling plants produced 21.9 million cubic metres of water which were distributed to farmers for irrigation purposes.

“We cannot continue producing and buying water that is inefficiently distributed causing it to remain unused and to ultimately be pumped back into the sea.”

Nor can we continue to let rainwater that does not make it into reservoirs, or that overflows from them, to make its way into rivers and then also back into the sea, she said.