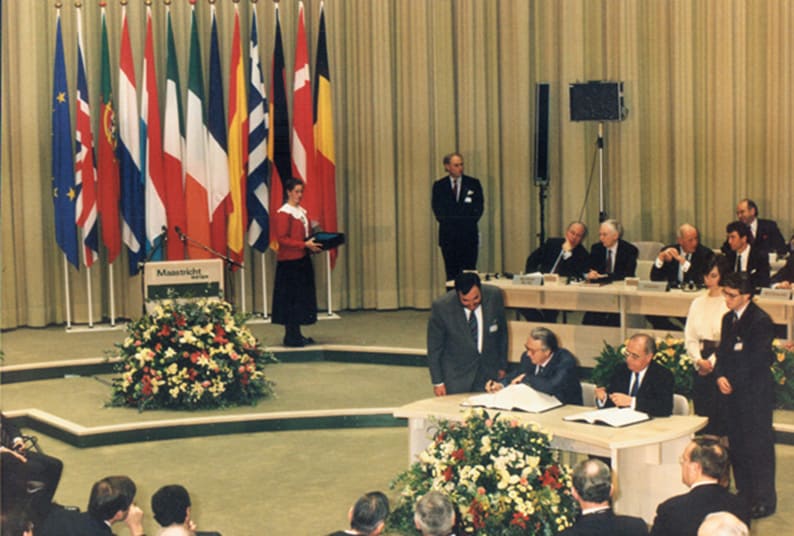 The early members of the Eurozone celebrated the establishment of the euro as the single currency for the eligible EU members states, but little did they know that two decades later there would be serious concern about the euro.

Despite the serious misgivings of the Germans to give up their Deutsch mark, the French insisted on tying Germany ever closer to the EU post German reunification; hence the birth of the euro, a political decision.

Yet it seems clear that the Eurozone may not fulfil the expectations of those who joined with such fanfare, and in fact monetary historians may show that a lot of the euro’s current problems have their roots in the Maastricht criteria and the failure to adhere to them.

While I have not agreed with Greece’s former finance minister, Yiannis Varoufakis, in the past I think some of the issues he raised at his recent Oxford Union lecture are true. The failure to implement the Maastricht criteria from the start, the failure of politicians who took their countries into the euro, the failure to implement the necessary reforms and bad governance in south European countries have all been contributory factors in raising doubts over the euro.

The architects of the euro, although possessed with good intentions of a single currency for the trading area of the single market, ignored key issues which have come to plague the EU and some of the members of the eurozone.  As copied from the European Commission website, the Maastricht criteria were as follows:

While very few member states were able to fulfil the above, we know that Italy for example was allowed to join, despite their debt/GDP being above 100 per cent, on the premise the trajectory of the ratio was downwards. The “political” decision was taken to let Italy in as a founder member of the EU. For anyone who has followed Italian financial developments since the late 1980s this was doomed to failure as Italy had unstable governments, deficit spending was never seriously addressed and the Italian demographics were very negative, especially in the ability to fund the generous welfare state.  Italy was not the only mistake which the founders of the euro made since they also allowed Portugal, Spain, Greece and then Cyprus to join.

Why was it a big mistake to accept the above countries into the euro region?  I will not dwell into too much detail as this is not the reason for the article. But anyone who has studied or lived through the economic and monetary history of all these countries could see that joining the euro was bound to cause these countries major problems when the system’s financial architecture could not sustain their excessive borrowing. The fundamental factor of the Maastricht criteria was that those countries which joined had to show convergence to the economies of the key founding members in terms of the financial indicators, but also for their economies to move towards fiscal discipline and reforms in the labour markets to make them competitive. None in my opinion really converged as required as their economies were structurally very different.

One might ask why did this convergence with the criteria matter so much? The answer is that while the “managed” financial indicators could look good, the lack of structural reforms was not the result of a real convergence. Many countries took one-off measures to bring the budget deficit down, while others used the financial derivatives (currency and interest swaps) to show a reduced deficit. Cyprus joined as a result of meeting the budget deficit in lieu of the tax amnesty and due to the unusually high capital gains tax during the property bubble.  In Greece it is well known how a US investment bank used swaps to bring the projected deficit and debt down.

The most obvious development that has really made all the above countries suffer the consequences of joining the euro, however, was that the politicians and local regulators only promoted the benefits of the euro in terms of lower interest rates and lower transactions costs as well as cross-border investment.  As we have witnessed, the lower interest rates led to a borrowing binge unseen in any other country other than the south European ones.  From the double-digit cost of borrowing in the above countries before joining the euro, all economic agents – be they government, corporations and households – now borrowed without considering how they would pay. Governments borrowed heavily and broke their commitments as countries found ways to guarantee borrowers using special purpose companies (SPCs). A famous case is Olympic Airways borrowing via a company set up in Cyprus and with the government of Greece guaranteeing the lenders to the SPC.

So why should we blame the euro and its original architecture, one might ask, for the sins of the politicians who governed those countries and the very poor regulation of financial activity in those countries?  Well, the answer may lie in the fact that the countries did not converge and should not have joined the euro as early as they did. Moreover, because these countries could not meet the stated criteria, this led to cooking the books. The core Eurozone members should have relaxed at least the debt-to-GDP ratio to, say, 80 per cent instead of 60 per cent and allowed countries during a recession to exceed to perhaps 100 per cent so long as it was backed by measures to bring it down to 80 per cent. This would have been more suitable for countries which had no experience of sound finances and for politicians to know that their non-compliance would have consequences on structural and cohesion funds.

The borrowing binge of households created the property bubbles (always linked to excessive and easy credit) which were the major cause of the financial crises which have characterised most of the above countries. The exception may be that of Greece where the problem was the public sector. But one might ask why did banks lend to Greece when they could have seen their fiscal numbers were so bad?

The common fallacy in the eurozone was that government debt of EU member states was zero risk; however, it was zero risk for capital adequacy purposes only.  In other words, government debt could have default risk for credit risk purposes.  Practically, it meant banks did not have to allocate capital against the asset as was required for most assets.  Herein lies another problem of the euro which is linked to the arrangements of joining the EU in the first place; once in the EU the bonds of a member state were zero risk for capital adequacy. How can one assert that German and Greek bonds should have the same capital treatment when one was AAA rated while Greece was BBB. This has meant banks thought they could load up with government risk and have a free ride. At least this mistake has been acknowledged and some in the European Central Bank and Germany are now suggesting to go back to ratings-based risk weighting for capital adequacy purposes.

One last assumption of the founders of the euro was that with a single currency there would be an expansion of cross-border investment since there would be no currency risk. How wrong they were again. Local regulations for insurers and pension funds mean that they cannot lend across the border with no restriction. We now have big efforts to have a capital markets union and a banking union to provide more comfort that the euro is sustainable as it is currently designed. How wrong they may prove to be again since German tax payers will not accept insuring deposits which is a pillar of bank deposit insurance in the banking union.

In fact the strength of the euro, and here is where I could agree with Varoufakis, is only strong so long as Germany is on board. If there is to be any change, as Varoufakis suggests, it may be that Germans may decide that it is best to go back to the Deutsch mark instead of assuming insurance risk of Italian and Greek deposits.

In short, unless there is a reform of the architecture of euro and countries take their responsibilities more seriously there may be headwinds ahead.  If we go by the example of the recent populists in Italy and their stance it is not very promising. As one former Italian Treasury senior official said at a panel discussion in London, when asked what was the risk of Italy leaving the euro, he said it may happen by accident!