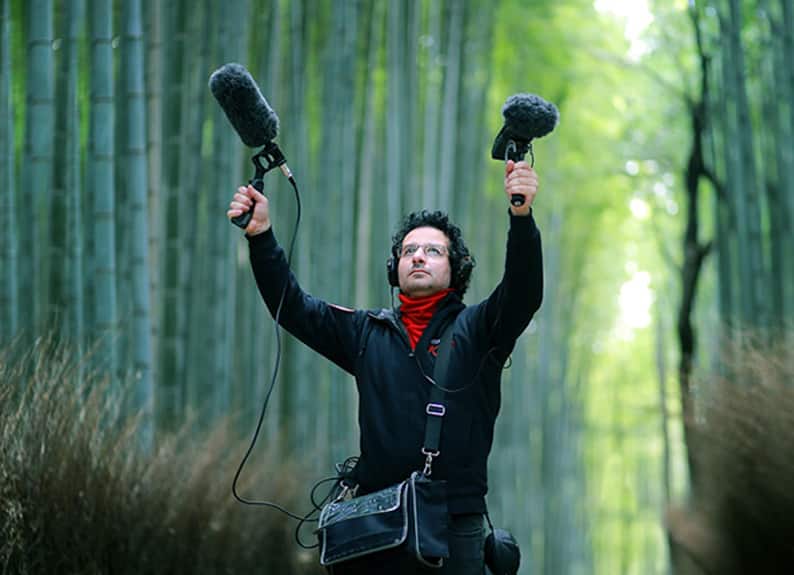 Marios Joannou Elia in action in a bamboo forest

Unconventional Paphos-born composer has won awards for his monumental compositions

The tak, tak of water dripping into a bucket from a leaking roof, the whoosh of steam from a coffee machine in a busy cafe should hardly count as music to the ear.

But for Marios Joannou Elia, such sounds can become a symphony.

Meeting in a bustling coffee shop, the Paphos-born composer invites me to really listen to the cacophony of complex sounds around us: steam from the coffee machine, the general hubbub of the cafe, hum of chatter, the steady thump of background music on the radio, the occasional scrape of a chair being moved, a high pitched squeak as the glass door swings shut, and the rumble of passing traffic.

It suddenly becomes an all engulfing symphony of sound, the music track to this present moment and life experience, and this, he said, is the aim of his latest projects.

“The sound here is polyphonic, made up of all of the different layers. If you listen to the sound, it’s not just a noise,” he said. “I try to sort of analyse it and then use this in my projects, in fact we generally hear many noises at the same time, but don’t really listen.”

Elia has racked up more than forty international prizes for his unconventional creation of monumental musical events.

At present he is completing his ambitious project, ‘The sound of Kyoto’, a contemporary acoustic portrait of the Japanese city this year.

“The project’s goal and vision is to musicalise the entire city,” Elia said of the project which was selected by the Japanese city from 330 proposals. The composer, who was also the artistic director of Pafos2017, completed a similar project in 2017, the ‘Sound of Vladivostok’.

Next up for the 40-year-old international composer and sound musician will be writing the composition for a World Guinness Record for the largest matryomin https://mandarinelectron.jimdo.com/matryomin/ ensemble with over 300 players in Kobe, Japan, for the 100th anniversary composition for the invention of the theremin http://www.thereminworld.com/Article/14232/what-s-a-theremin, the unique instrument with antennas which is played without being touched.

The matryomin is a ‘one antenna theremin’ which is inserted into a Matryoshika or Russian doll. Played in a mass, the process of creating the complex, powerful sounds by the instrument is similar to that of a choir.

The work is being commissioned by the Russian and Japanese theremin schools.

Elia is a visionary, and is also working on a new large-scale work for trumpet solo, symphony orchestra and choir, a commission of the Kodaly Centre and Pannon Philharmonic in Pécs, Hungary.

According to the American academic journal Perspectives of New Music: “Elia is regarded as one of the most important and influential composers of the younger generation”.

Affable, bespectacled, with a mop of curly hair and a wide smile, Elia has carved an international name for himself as a groundbreaking composer working on large scale projects which are currently taking him all over the world.

Yet when he was a child he wanted to be an astronaut or ‘more realistically’ a jet pilot.

“Maybe my aims were a bit exaggerated but for me they were real. It’s like music, this is something that is imaginary, it’s a vision that you bring to life.”

Fascinated by the Red Arrows, he was always the first to arrive at their demonstrations in Cyprus and awed by the element of danger, he said. However, his goal to become a jet pilot, training at a specialist school in Greece, were soon debunked by his imperfect eyesight.

But his attraction for danger remains and is reflected in his work. He can often be found at various locations around the world, hanging off a precipice, or precariously positioned above a waterfall, equipped with his sound recording gear, and all to catch that one elusive sound.

For the last year Elia has spent much of his time in Kyoto doing just that, composing and gathering sounds that tell the story of the city in a unique way which he describes as a ‘mosaic of all different pieces that fit together’. Most of this process is being documented in a film which will be the culmination of the work which is due to be completed in around a year’s time.

Musicians, soloists, ensembles, choirs and orchestras, sounds that are unique to the city and other acoustic components, such as: sounds and representations of the river, Sumo, Geisha, and the Matryomin orchestra are all important aspects, he said.

Elia studied composition with Adriana Hölszky at Mozarteum Salzburg and musicology at University of Music and Performing Arts in Vienna and holds a doctorate of philosophy from the University of Southampton.

His ‘exceptional academic performance’ was awarded by the Austrian Federal Ministry of Education, Science and Research in 2002, one of many accolades he has already collected through his career.

Recently he was also honoured by the government of Primorsky Krai in Russia and the mayor of Vladivostok “for the development of the musical art in the Primorsky territory and the invaluable contribution to its cultural development”.

These accolades relate to another of Elia’s large scale projects, the ‘Sound of Vladivostok’ which premiered at Cinema Vladivostok and saw 350 musicians take part.

“The entire city is the scenery and the stage on which the music is performed and the city’s voice is heard,” he said.

This result is accomplished by using a vast and eclectic array of sounds including, a symphony orchestra, several choirs, Korean drums, Soviet-era cannons, ships and air jets.

The project was awarded the Grand Prix ‘Silver Archer’ of the Far East and led to an invitation from the Japanese government in collaboration with the city of Kyoto and Kyoto Art Centre to work on ‘Sound of Kyoto’.

“I was always interested and very sensitive to sound. It started from a traumatic experience,” he said.

“My parents were forced to leave Kyrenia, where they originally came from, after the events of 1974 and I was born in Paphos into a situation my parents could never imagine.”

This new home had a leaking roof and a metal pail was placed next to his bed at night to catch the falling drops of water.

“This came to be a kind of education for me, I remember them (the drops) tak, tak, this was like a pain, because this memory brought me a whole story connected to our history, our existence.”

Elia was a sensitive child, already aware that there was a difference between hearing and listening.

“I became aware through listening. Trying to concentrate on a sound, this was the beginning. Nobody told me to do this. It came naturally. When you study you learn a certain academic programme but in creativity, it’s beyond all this,” he said.

Elia said that with the both the Vladivostok and Kyoto projects, much goes into the preparation and ground work.

“I prepare from a distance before going to a city. In Kyoto, we have a production team, and three local Japanese coordinators, they sent me information and I carry out research as well.”

A plan of action is then drawn up, carefully choosing spaces, their positions and areas. This may often be unusual locations, such as a tunnel found under the city of Kyoto.

So far, Elia has crafted fifteen compositions which will be part of ‘The sound of Kyoto’ for various groups, and some are being performed at two or three different locations. This process will result in a movie.

“This is the visual layer and explains the source of the sound, or the idea behind the sound, or maybe what is associated with the city and so on.”

He noted that he is still ‘only in the middle of the project’ and that the dimension is double that of his Vladivostok project. The result will be very different, he stressed, as the cities are polar opposites.

“Vladivostok is very new, it was established in 1860 for military reasons, and remained a ‘closed’ city until 1992. It has a very unique and character, as does Kyoto which has a long and culturally rich history and traditions.”

Elia said his aim is always to capture the heartbeat of a country and its people and that creating a similar project for Paphos would be advantageous, but that he has yet to be approached.

“I’m directly connected to Cyprus and it’s like my own blood, it’s inside me. I have lived many experiences here for many years and maybe the vision here could be bigger.”

He added such a project, as with all his works, would be exciting and challenging, offering a wonderful way to show the world Cyprus’ character, cultural richness and idiosyncrasies.

“In Japan, no-one has even heard of Cyprus,” he said.