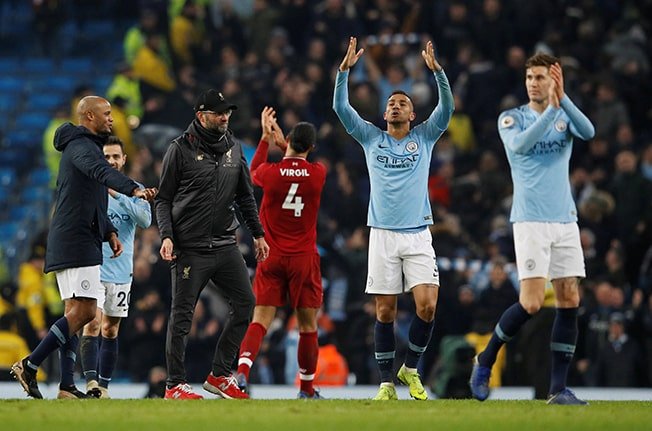 Liverpool’s lead at the top of the table remains four points after their topsy-turvy 4-3 win over Crystal Palace on Saturday while Manchester City beat Huddersfield 3-0 in Yorkshire on Sunday.

TOP TWO WIN BUT BOTH ARE LABOURING

Neither Liverpool nor Manchester City looked anywhere near their best and it was hard not to have the feeling that the pair of them appear a little tired.

The hectic festive programme takes a toll on all English teams but while Liverpool’s front three all scored and looked dangerous, they lacked the dynamism in midfield that has characterised their rise this season.

While the result at bottom-placed Huddersfield never looked in doubt, City were also sluggish in the first half, lacking their trademark zip and sharpness in their passing and movement.

They missed the contributions of David Silva and Bernardo Silva, who both started on the bench, with Pep Guardiola perhaps having half an eye already on February’s resumption of Champions League action.

SALAH’S REPUTATIONAL RISK
Against Palace, Mohamed Salah, who scored twice to take his Premier League career tally to 50 goals, was involved in another incident where, to use the popular euphemism for diving, he “went down too easily”.

This has happened too often this campaign and the Egyptian, a wonderful player with extraordinary agility and skill, needs to ask himself if he really needs to engage in such behaviour?

Defenders are already afraid of touching him in the box and they have a hard enough time trying to tackle him when he has the ball at his feet. He doesn’t need to trick referees.

INJURIES WRECKING SPURS’ SEASON?
Tottenham Hotspur not surprisingly looked much less of an attacking threat at Fulham on Sunday without Harry Kane, who is out until March with an ankle ligament injury.

It did not help that Son Heung-min, the team’s other goal threat, was also absent, on duty at the Asian Cup with South Korea.

The pressure was on Dele Alli to contribute more in the final third and he responded with the equalising header but then picked up a hamstring injury later in the game.

Mauricio Pochettino must hope that when Son returns from the Asia Cup in February he does so fully fit and ready for a crucial few weeks.

WHAT IS IT ABOUT CHELSEA?

Jose Mourinho and Antonio Conte both left Chelsea after troubled relationships with the players and now Maurizio Sarri has described them as lacking “sufficient motivation” and not being “mentally solid” following their loss to Arsenal.

The Italian’s words raised the question of whether this could be another season that features talk of attitude problems among Chelsea players.

Mourinho and Conte are both managers with short fuses, but Sarri is widely seen as a calm figure, albeit one with a very fixed idea of how to play the game. Yet all three have found it tricky to keep the Chelsea dressing room onside.

Chelsea no longer have the English ‘core’ of Frank Lampard and John Terry that enjoyed so much success alongside their array of international talent.

There are several players heading into the latter years of their careers and their star performer, Eden Hazard, is constantly rumoured to be a target of Real Madrid.

Is the time coming for a major squad makeover at Chelsea?

German David Wagner left bottom club Huddersfield Town last week and, for once, the phrase ‘by mutual consent’ does not appear to have been a polite code for “we sacked him”.

Huddersfield were struggling in the Championship when Wagner took over and, with a limited budget, he took them up into the Premier League via the playoffs, bringing top-flight football to the Yorkshire town for the first time in 45 years.

Last season, Huddersfield survived against all the odds, with Wagner motivating a modest side to battle all through the year, so it was refreshing to see so many warm tributes to the German from Huddersfield players and supporters.

Most managerial reigns end in bitter splits with fans turning against men they once deified. Wagner and Huddersfield showed it doesn’t have to be that way.