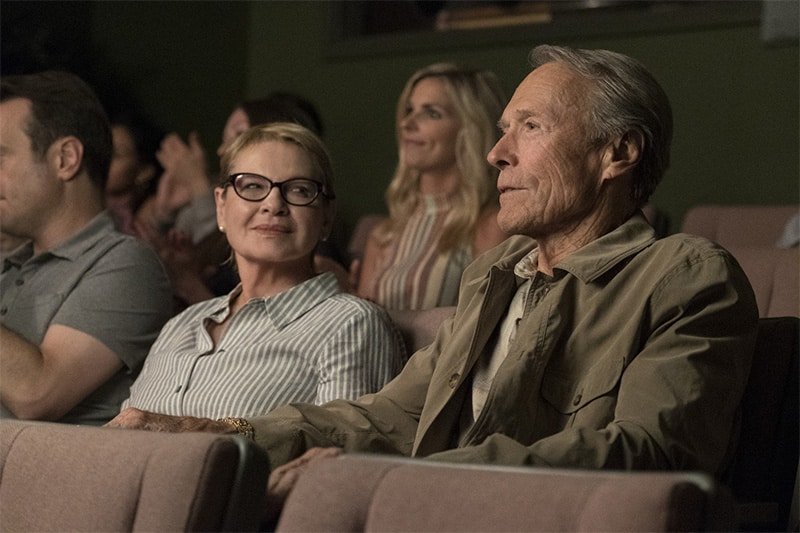 Earl Stone (Clint Eastwood) is the titular mule, transporting drugs for a Mexican cartel. Earl, like Clint, is an old man (Eastwood is 88), and by no means a career criminal – but he ends up making big money, aided by the fact that no-one would suspect this frail-looking elder as he drives cross-country, packs of coke hidden in the boot of his truck among the bags of pecans. 282 kilos you’ve brought in this month, that’s a new record!, marvel his handlers, and Earl looks pleased – though of course we wait for morality to kick in, and Earl to realise that paving the streets with cocaine is nothing to be proud of. Will he meet some junkie on the road, thereby waking up to his own complicity? It’s coming, for sure.

Let me spoil right now (though it’s no spoiler, if you know the first thing about Clint Eastwood) that morality never kicks in, nor does Earl have a road-to-Damascus moment and beg the Lord for forgiveness. This is not because Earl is evil but because he’s a man of the world, a war veteran and flawed (ex-)husband and father who doesn’t claim to be perfect. People say he sounds like Jimmy Stewart, but he sure doesn’t act like him. He may use his newfound cash for some good causes – like covering the open bar at his granddaughter’s wedding – but he’s no Robin Hood: he buys himself a new truck and a gold bracelet, and splashes out on a couple of young ladies to keep him company while he’s staying at a roadside motel. He likes to go his own way, annoying both his ex-wife (Dianne Wiest) and his criminal employers. He turns the dial on the car radio, changing the station from Jesus to pop music; he has no time for organised religion either.

Earl (and Clint’s) persona is the most glorious thing about The Mule, a based-on-fact drama that’s less extraordinary for what it is – though it’s very amusing – than for what it represents. It’s a personal film, implicitly addressing Eastwood’s own failings as a family man (Earl’s daughter is played by his own daughter, Alison Eastwood) and pushing the rugged individualism – politically, one could call it libertarianism – that’s been his brand for years now. It’s also an attempt to grapple with today’s America without the usual pieties, from the viewpoint of the only 88-year-old man making films in Hollywood.

Take race, for instance. Earl is undoubtedly racist in the new sense of noticing people’s skin colour – but he’s not racist (quite the reverse) in the old sense of mistreating people based on their skin colour. In one scene, Earl stops to help a young African-American couple who’ve had a flat tyre (the husband “isn’t very handy”, and is trying in vain to Google what to do). It’s a pleasure helping “you Negro folks,” says our hero – and the couple gently upbraid him for using outdated language, and he looks a bit abashed. On the one hand he doesn’t apologise, or necessarily ‘change’. On the other, he does change their tyre.

Eastwood’s old-fashioned belief is that actions speak louder than words (as a movie star, he’s always been a man of few words). He appears conservative, yet in fact mistrusts the rules from the Right – cops, especially – as much as the rules from the Left; mostly, he just wants to be left alone. Earl is realistic, knowing he’s made mistakes and expecting only small mercies (he can understand why the ex-wife hates him, but “we had 10 good years,” he notes reasonably; “We can still be civil”) – and The Mule too is a brisk, rugged, hard-headed movie, albeit also quite funny. The scariest part of doing business with the cartels, for our hero, seems to be having to text on the phone they provide him with (“Text?” he repeats in a small voice). The internet in general is something of a villain here, Kids Today – and their love affair with their phones – prompting much grumpy-old-man kvetching.

If only the film were slightly better – but it’s more substantial than last year’s The 15:17 to Paris, and seeing the man himself onscreen (for the first time since 2012) adds a definite frisson. Even its bare-bones briskness is quite refreshing. A potentially complicated scene – Earl decides to check his cargo for the first time, then a cop appears (with a drug-sniffing dog, no less!) just as he’s bent over the open boot – is disposed of with minimal fuss in a handful of shots. Above all, there’s grace in our hero’s imperfect integrity, his lack of self-righteousness and simple acceptance of guilt at his misdeeds; indeed, his simplicity in general. Earl has a gentle side. He used to be a horticulturalist before becoming a drug mule, and explains why he loves plants so much: “They just bloom one day,” he marvels, “and that’s it”. It takes 88 years to arrive at that kind of wisdom.