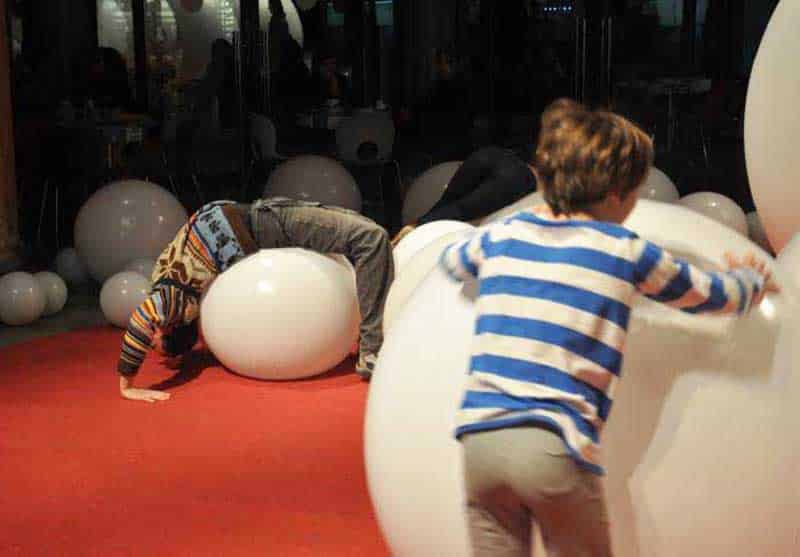 First, let’s clear this up. The ABR is a non-profit organisation which, each summer, hosts a wonderful festival that you’ve probably heard of, if not attended: the Afro Banana Republic. But the acronym actually stands for Alternative Brains Rule, and it’s under this umbrella that we get not only the festival of fun but also a number of excellent projects, all aimed at spurring innovation.

One such is ABR in Lab, an annual event which is the research arm of the organisation. And this January, the team behind the title is developing a project that’s so staggering in its conception and execution that it’s well worth a moment of everyone’s time…

Called Flux, the project will be taking place at the Point Centre for Contemporary Art, Nicosia, until Saturday, sponsored by the Cultural Services of the Ministry of Education, and promises to be quite unlike anything you’ve seen before. Billed as an installation, it’s the brainchild of three creatives from very differing fields: architectural artist Constantinos Kyprianou, Berlin-based architect and computational specialist Philipp Mecke, and Chilean musician and interactive design programmer David Dalmazzo.

What, you wonder, could an architect, computer expert and musician create together? Well, the answer is a little confusing – but nonetheless incredibly exciting, and very much in keeping with the ABR spirit of innovation. “In its most basic form, we’re creating a space, a room,” reveals architectural artist Constantinos, “which adapts to the people within. Thus the space will actually change its form in reaction to its users, challenging the fundamental ways in which people move through space, and opening up a new world of opportunities…”

A complicated process which involves the expertise of all three team members, this room within a room has been designed utilising yards of parachute fabric, various cameras, and complicated technology. “It’s completely interactive in all three dimensions,” Constantinos explains. “Using cameras, we can chart the movement of the people within. This information is sent to a programmable relay, and the grid which surrounds the room and controls the fabric allows the space to adapt itself along the x, y and z axes… So your movements are fluidly echoed by the space in which you’re contained.”

It is, he adds, a totally unique project – one that has never before been attempted: a merging of unusual art forms in which “architecture choreographs the user, promoting alternative pathways for animated navigation.” As convention is challenged, and the audience themselves become “dancers in their own improvised choreographies” the installation aims to explore the shift between the static and predefined, and the fluid and ever-evolving…

“Our navigation through outdoor and indoor space is usually predetermined, and our experiences are often limited,” explains Constantinos. “But here at ABR, we’re always searching for ways to inject creativity into daily life, and Flux has allowed us to question the conventional ways people move through space, offering an exciting alternative experience. Using various stimuli to encourage visitors to become dancers as part of a responsive installation, their movement will in turn change the architecture and sounds of a previously fixed environment.”

Complicated? Yes. But very unusual, and certainly a challenge to those willing to become brave performers in this paradigm-shifting art form. “Setting up an interactive installation is relatively easy,” Constantinos continues. “Animation, cinematography, static art – these are all common. But if you focus instead on the movement of the viewers around and through the work, you get an entirely new type of creation – a complex and fascinating piece in which the audience’s actions become the installation itself.

“In a way,” he concludes, “we’re completely redefining the relationship between a space and its user; disrupting the idea of conventional architecture we’ve held for thousands of years. What we’re used to,” he continues, “is passing along a corridor, up a staircase, through a door. But when you have a space which reacts directly to your own actions, a fluid and adaptive surrounding, you can begin to explore the endless capabilities, dynamics and idiosyncrasies of your movements to such an extent that a change is set in motion. A change which echoes the flux – and our ABR theme of moving ever forward in innovative ways – of today’s evolving and fast-transforming world.”

By ABR in Lab, takes place at the Point Centre for Contemporary Art, Nicosia, until January 26. Entrance is free. For more information, visit facebook.com/ABRINLAB

Cavusoglu: Turkey has done its part to solve Cyprus problem